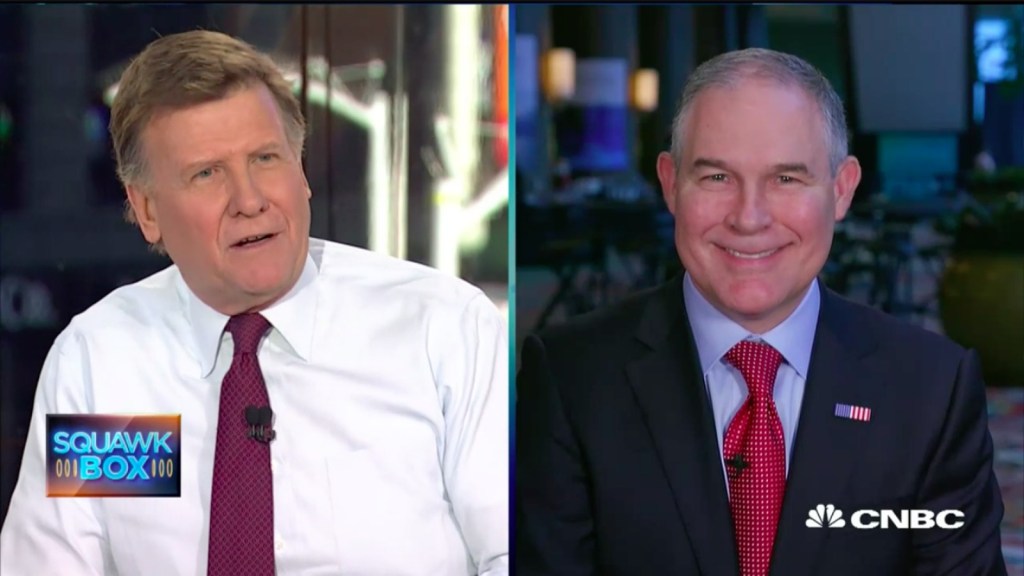 Kernen, who once said climate science is like witchcraft, asked Pruitt if he believes that carbon dioxide is the “main control knob” governing global warming.

“I think that measuring with precision human activity on the climate is something very challenging to do, and there’s tremendous disagreement about the degree of impact,” Pruitt responded. “So no, I would not agree that it’s a primary contributor to the global warming that we see.”

The overwhelming majority of scientists agree that the increase of carbon dioxide levels due to human activity is the most significant driver of global warming. “The carbon dioxide emitted by burning coal, natural gas, and oil has a unique chemical ‘fingerprint’ — and the additional CO2 in the atmosphere bears that signature,” noted the Union of Concerned Scientists in a report on global warming. “Though other heat-trapping gases also play a role, CO2 is the primary contributor to global warming.”

Pruitt, who sued the EPA multiple times as Oklahoma’s attorney general and has deep ties to the fossil fuel industry, claimed during his Senate confirmation hearing that there is debate in the scientific community over manmade climate change. In today’s interview he said, “We need to continue the debate and continue the review and the analysis.”

Pruitt’s comments will likely please his boss, who has famously described climate change as a Chinese hoax.