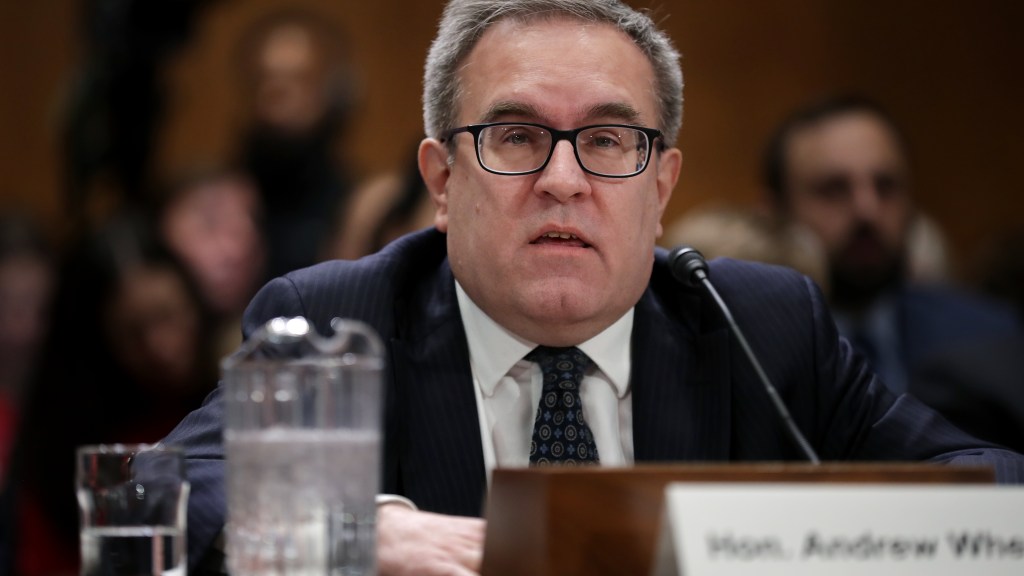 It was clear about halfway through Andrew Wheeler’s confirmation hearing to lead the Environmental Protection Agency that he wasn’t prepared for the number of questions he was getting on climate change.

Senator Ed Markey (a Democrat from Massachusetts) asked Wheeler on Wednesday whether he agreed with the fourth National Climate Assessment’s conclusions on how Americans will be affected by the world’s relative inaction on climate change, a report that was vetted by 13 federal agencies including the EPA.

Wheeler didn’t exactly answer, saying that he had not been fully briefed on the report because much of his agency’s staff isn’t working right now. “We’ve been shut down the last few weeks,” he said, explaining that he had only been briefed once by staff since the report was published in late November. He said his additional briefings were postponed; about 95 percent of his agency is furloughed.

The Republican majority gave Wheeler an unsurprising pass, defending his record as a lobbyist for an assortment of industries he now regulates, including his main old client, coal baron Bob Murray. But most of the Democratic members, which included several potential 2020 presidential contenders, grilled Wheeler on climate change.

Senator Bernie Sanders asked Wheeler if he considered climate change to be “one of the great crises that face our planet.”

“I would not call it the greatest crisis, no sir,” he answered. “I would call it a huge issue that needs to be addressed globally.”

When senators grilled him on climate change, Wheeler attempted to walk a fine line to sound more reasonable than the president’s talk of a “hoax,” but not go too far to suggest he would do much to crack down on rising greenhouse gas pollution.

“On a one to 10 scale, how concerned are you about the impact of climate change?” Senator Jeff Merkley (a Democrat from Oregon) asked Wheeler, saying that 10 would be an issue that keeps him “up at night.”

“I stay awake at night worrying about a lot of things at the agency,” Wheeler said, before volunteering an “eight or nine.”

The senator challenged Wheeler on his go-to talking point that the EPA was taking action on pollution via its Affordable Clean Energy rule replacement for an Obama-era coal plant regulation and fuel efficiency standards. ACE doesn’t reduce carbon emissions from coal any more than market forces, and the EPA is weakening car standards and considering ending a waiver for California that implements more aggressive targets.

These policies already didn’t come close to the reductions needed to limit warming below a disastrous 2 degrees C (3.6 degrees F). But reversing them risks even more. Last year, greenhouse emissions continued to rise globally, including by 3.4 percent in the United States.

There was an even sharper focus on climate change than in past Trump-era EPA hearings. The conversation around climate change has shifted quite a bit since Wheeler last appeared before the Senate in August, a few weeks after he took the helm of the agency. Now Trump officials face more questions from the opposing party that dig deeper than the usual “Do you believe in climate change?”

The three senators who are considering presidential bids, Cory Booker of New Jersey, Sanders, and Merkley, all centered their questions around climate change. Since August, the issue has become a top item for the House Democratic majority, and progressives have talked of an ambitious “Green New Deal.” Meanwhile, the science has grown more alarming: In addition to the National Climate Assessment, an October report from the Intergovernmental Panel on Climate Change looked at the damaging effects from 1.5 degrees C (2.7 degrees F) of warming.

A protest interrupted Wheeler when he began on Wednesday, which never once mentioned the words “climate change,” as he ran through his greatest hits — deregulatory and otherwise — from his first year at the EPA.

The protests could still be heard faintly from the hallway when he continued his introductory remarks. “Shut down Wheeler! Not the EPA!”