Even Rex Tillerson thinks Trump is wrong on climate change 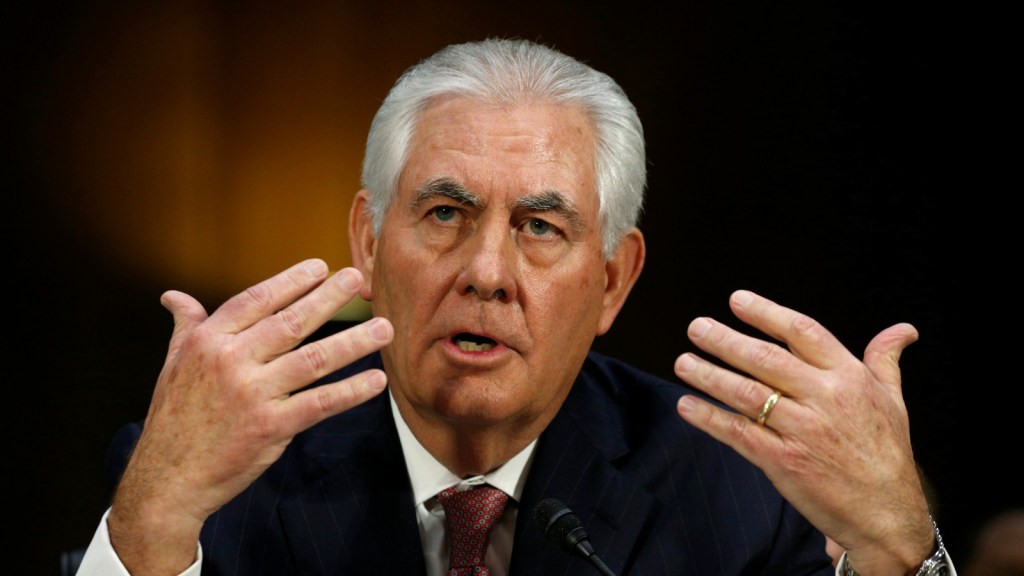 Even Rex Tillerson thinks Trump is wrong on climate change

At his confirmation hearing Wednesday to become secretary of state, Rex Tillerson contradicted President-elect Donald Trump’s positions on climate change and his promise to withdraw the United States from global climate action.

Although ExxonMobil, where Tillerson served as CEO, has been accused of impeding efforts to address global warming, Tillerson has acknowledged the threat posed by climate change. When Ben Cardin (D-Md.), the ranking Democrat on the Senate Foreign Relations Committee, asked Tillerson whether the United States should lead international efforts to address climate change, Tillerson responded, “I think it’s important that the United States maintain its seat at the table on the conversations around how to address the threats of climate change, which do require a global response. No one country is going to solve this alone.”

One of the most important places where this conversation took place was during negotiations for the United Nations’ 2015 Paris climate agreement, which Trump disparaged on the campaign trail. Trump promised in a May campaign energy speech to “cancel the Paris climate agreement.” After winning the election, he told the New York Times that he’s “looking at it very closely” and said, “I have an open mind to it.” But his appointment of climate change deniers to lead the Environmental Protection Agency and the Department of Energy indicates that Trump is unlikely to reconsider his views.

“The president-elect has invited my views on climate change,” Tillerson said. “He knows I am on the public record with my views. I look forward to providing those, if confirmed, to him and policies around how the United States should carry it out in these areas.”

Trump has also pledged to “stop all payments of U.S. tax dollars to U.N. global warming programs.” Sen. John Barrasso (R-Wyo.) asked Tillerson if he would suspend State Department funding to the Green Climate Fund, a major feature of the Paris Agreement. Tillerson replied only that he would conduct a thorough review from the “bottom up.”

Tillerson hedged in his assessment of the threat of climate change, but his stance clearly differed from Trump’s claims that climate change is a “hoax.”

“I came to the decision a few years ago that the risk of climate change does exist and the consequences could be serious enough that it warrants action,” Tillerson said. “The increase in greenhouse gases in the atmosphere are having an effect. Our ability to predict that effect are very limited.”

Pressed on his past statements in favor of a carbon tax, Tillerson, who at first suggested that the issue would be outside his purview at the State Department, said it would be better to replace “the hodgepodge of approaches we have today” on climate policy.

Compare Tillerson’s stance with the one taken by Trump three years ago:

Any and all weather events are used by the GLOBAL WARMING HOAXSTERS to justify higher taxes to save our planet! They don't believe it $$$$!

In a debate with Hillary Clinton last year, Trump denied ever calling climate change a hoax.

Sen. Tim Kaine (D-Va.) asked Tillerson about reporting from the Los Angeles Times and InsideClimate News that ExxonMobil had internally acknowledged climate science while publicly waging a campaign to undermine it. Tillerson demurred. “Since I’m no longer CEO of ExxonMobil, I can’t speak on their behalf,” he said. “You’ll have to ask them.” Asked if he was refusing to answer or simply lacked the knowledge to do so, Tillerson quipped, “A little of both.”

In his opening statement, Tillerson made no mention of climate change, despite military experts’ view that climate change is a threat to national security. Russia was the main focus at the hearing’s morning session, but protesters occasionally interrupted the questioning to bring up climate change. “My home was destroyed by Hurricane Sandy,” one said as she was escorted out of the room. “Rex Tillerson, I reject you.”