Even Scott Pruitt's friends have given up on him 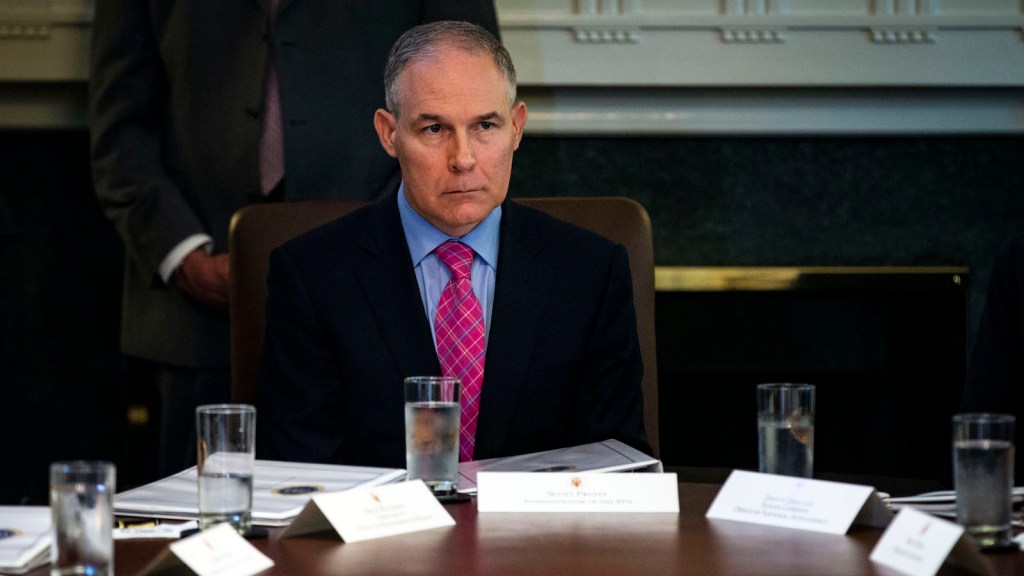 Even Scott Pruitt’s friends have given up on him

EPA chief Scott Pruitt may still be clinging to his job despite his ever-expanding list of controversies, but his inner circle of allies is shrinking fast.

Since April, seven key EPA staffers have resigned, four of whom had once worked for him or were longtime friends he brought to the EPA from Oklahoma. And while not directly affiliated with the EPA, Senator James Inhofe, an Oklahoma Republican who has been a key ally of Pruitt’s, recently revealed some cracks in his support. On Wednesday, when Fox News personality Laura Ingraham observed that Pruitt was “hurting the president”and it was time for him to go, Inhofe replied,“I’ve seen these things. They upset me as much as they upset you, and I think something needs to happen to change that.” He suggested that one solution “would be for him to leave that job,” and that the deputy EPA administrator Andrew Wheeler “might be a good swap.”

Inhofe’s connection to Pruitt runs deep. His former chief of staff, Ryan Jackson, became Pruitt’s chief of staff and reportedly wanted to quit the agency, according to an E&E report in early April. So far, he has remained in his position, and the House oversight committee plans to interview him as part of its investigation into Pruitt’s conduct. Four of his former EPA colleagues who have since left have also been asked to appear before the committee.

A turning point in staff loyalty may have occurred in April, when news broke that Pruitt had rented a $50-a-night condo co-owned by an energy lobbyist for six months. After that, a series of stories about his questionable behavior appeared, and one by one, his formerly loyal staff began to exit the EPA.

Samantha Dravis: One of Pruitt’s first and closest advisers, she worked for the EPA Office of Policy and was often seen by his side. She knew Pruitt from her days as general counsel to the Republican Attorneys General Association and president of its affiliate dark-money group Rule of Law Defense Fund, both of which Pruitt chaired during his time as Oklahoma attorney general. On April 20, she officially left the EPA for the private sector after taking a three-month leave from the agency between November and January. Unnamed agency officials told CBS and the Washington Post that her decision had nothing to do with the bombardment of news that came days later about Pruitt renting a condo from the lobbyist and approving inappropriate pay raises for two staffers.

Albert “Kell” Kelly: Two weeks after the Federal Deposit Insurance Corporation fined Kelly for his alleged involvement in a loan that hadn’t received FDIC approval, Scott Pruitt hired his old friend “Kell” at the EPA in 2017 to lead the Superfund Task Force. The former banker’s company had issued three mortgages to the Pruitts and provided a loan to finance Pruitt’s stake for co-ownership of a minor league baseball team, according to an investigation by the Intercept. Kelly, seen as a close confidante of his EPA boss, left the agency in early May (on the same day as another official, Pasquale Perrotta). In a statement, Pruitt praised the “tremendous impact” Kelly had on the Superfund program, which Pruitt has singled out as his personal achievement, adding, “Kell Kelly’s service at EPA will be sorely missed.”

Pasquale Perrotta: Pruitt’s head of security, Perrotta, quit the agency on the same day as Kelly, accelerating his retirement after serving under four EPA administrators. Perrotta came under fire for helping to enable Pruitt’s expansive spending, signing off on regular first-class flights that Pruitt had justified as necessary because of security concerns. The EPA hired Perrotta’s business partner at his private security firm, Sequoia Security Group, for security sweeps when Pruitt arrived.

Liz Bowman: A four-year veteran of the chemical lobby American Chemistry Council, Bowman arrived at the EPA to run its communications team. During Pruitt’s tenure, the press shop has shut out reporters who cover the EPA from events while turning to conservative media to create an echo chamber amplifying Pruitt’s message. Bowman sent her resignation letter as the chief spokesperson for the agency on April 30 and, in early May, assumed her position to handle communications for Senator Joni Ernst, Republican of Iowa. Just after her resignation letter, the Atlantic reported that a communications staffer had been reportedly shopping negative stories about another Cabinet member, the Department of Interior’s Ryan Zinke.

John Konkus: Konkus was second-in-command in the press shop, and his departure was announced on May 4, making him the fourth staffer to leave that week. Last year, the aide was tasked with cutting contracts from the Obama years, and reportedly combed through grants and contracts looking for the phrase “climate change.” True to his communications roots, on his LinkedIn page, Konkus frames this experience in a positive light: “Completely reformed the $4B/annual grant award and solicitation process at the agency to adhere to the new EPA strategic plan and better reflect the policies of the Trump Administration.” He also sparked a minor controversy for receiving an ethics waiver to work as a Republican political consultant while at the EPA. A former field office director in Florida for Trump’s presidential campaign, Konkus is headed to another federal agency — this time, the Small Business Administration, where he will be in charge of communications.

Sarah Greenwalt: Another Oklahoma aide from when Pruitt worked as state attorney general, Greenwalt, a senior counsel, announced her departure in early June. She was one of the two aides who received a 53 percent raise from Pruitt, who used the Safe Drinking Water Act to approve the raises after the White House rejected them. She is leaving to become an attorney for the Oklahoma Workers Compensation Commission.

Millan Hupp: Once an employee of Pruitt’s in Oklahoma, Hupp came to the EPA to do his scheduling. She was one of the five staffers interviewed by the House oversight committee for her involvement in finding Pruitt a used Trump hotel mattress and housing with the energy lobbyist, which Democrats say violates federal law forbidding Pruitt from using EPA staff and resources for private gain. The Atlantic quoted an anonymous staffer saying she left because she was “tired of being thrown under the bus by Pruitt.” Hupp was one of the two staffers to receive a raise unauthorized by the White House from Pruitt. Her sister Sydney Hupp also worked at the agency and left last year. She helped Pruitt’s wife, Marlyn, set up a meeting with Chick-fil-A in an unsuccessful bid to own a franchise. She may not have a franchise, but she was responsible for yet another possible violation of federal law.