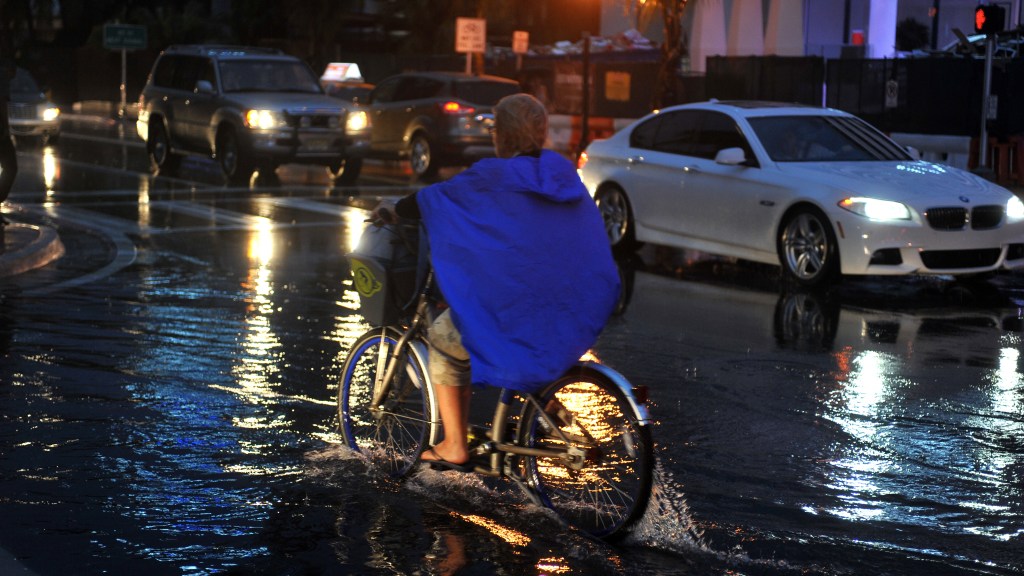 You see it when city streets flood with the rising tide, when garbage cans float down sidewalks, when you have to wade through seawater to get to your car in the morning. And yet, Florida’s own senator and presidential hopeful Marco Rubio has long ignored what is happening back home — even denying that climate change is happening. At a recent campaign event in Iowa, Rubio said that as president he would not support policies to address climate change, arguing that they would “destroy” the economy. “The climate has always changed,” he said. “There’s never been a time when the climate has not been changing.”

It’s a tired argument, one debunked many times over, and South Florida’s leaders are sick of it. Now, they’re taking action.

The mayors of 15 South Florida towns, including Miami and Fort Lauderdale, have reached out to Rubio, asking him to consider the costs of climate change in the region. They wrote in a open letter:

As mayors representing municipalities across Florida, we call on you to acknowledge the reality and urgency of climate change and to address the upcoming crisis it presents our communities. Our cities and towns are already coping with the impacts of climate change today. We will need leadership and concrete solutions from our next president. As a candidate for that office hailing from Florida, we ask you to meet with us to discuss the future of our communities in a warming climate.

We are already experiencing the effects of a changing climate. Sea levels off the coast of South Florida rose about eight inches in the twentieth century. As a result, we have seen more tidal flooding, more severe storm surges, and more saltwater intrusion into aquifers. By 2050, mean sea level around Florida is expected to rise about a foot, a shift which could wipe out as much as $4 billion in taxable real estate in the four-county region of Southeast Florida. At three feet of sea level rise, the loss could total $31 billion, with large sections of the Everglades, the Florida Keys and the Miami metropolitan region under water.

It’s a salient point: Even if Rubio doesn’t care about the suffering of people or of ecosystems, surely he cares about money — and with losses in the billions, the costs aren’t easy to ignore.

Rubio, as the mayors point out, hasn’t always been so wrong-headed about climate change. “In 2006,” the mayors wrote, “you acknowledged the reality of climate change and promoted solutions including energy efficiency measures, tax incentives for renewable energy, and alternative fuels. You supported hybrid vehicles because they save money ‘while reducing emissions and helping to curb global warming.'” But that was before Republicans decided en masse that climate action was a Democrat issue.

The mayors conclude their letter with a request: They ask Rubio to meet with them next month, to listen and learn about their experiences on the front lines of climate change. This meeting seems unlikely to happen. Rubio will be busy campaigning in New Hampshire, South Carolina, and Nevada then, with climate change nowhere on his agenda.