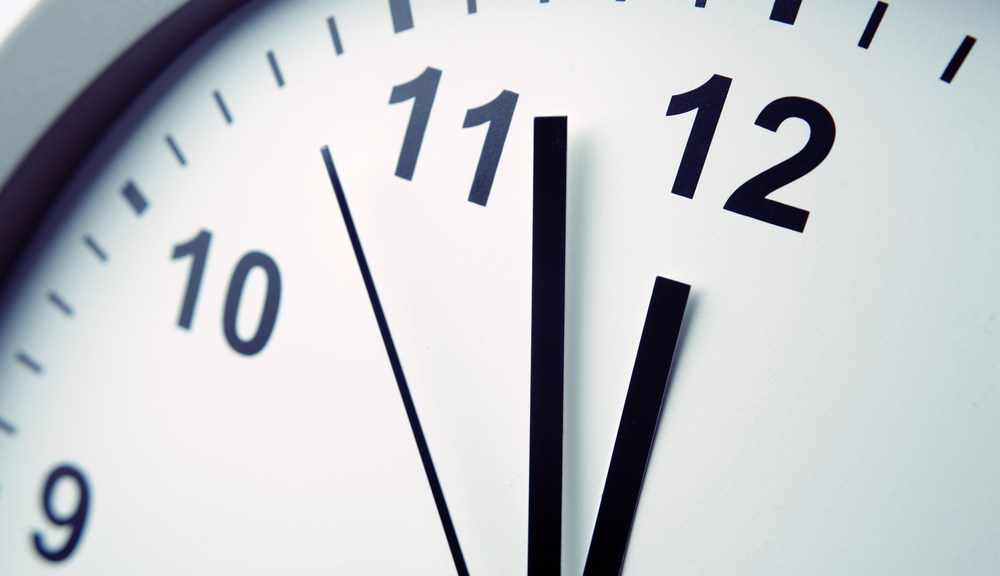 Just in case you were feeling a little too complacent after the Paris climate talks, a bunch of scientists and policymakers are here to let you know that the deal was merely a “bright spot” in a “darker world situation full of potential for catastrophe.”

Oh goodie. Ye olde keepers of the Doomsday Clock, aka the Science and Security Board of the Bulletin of Atomic Scientists, announced this week that their (kind of bogus) apocalypse clock remains at three minutes to midnight — exactly where it was last year. The Bulletin, founded in 1945 by a bunch of Manhattan Project researchers who had realized that they’d created something that could basically wipe out humanity, started the clock back in 1947 (arbitrarily) at seven minutes to midnight.

Now, if you’re up on your clocks, then you’ll realize that something’s off with this one. It’s moved just four minutes in 69 years and hasn’t moved at all in the past 365 days. That’s because this isn’t a real clock ticking down to humanity’s end. It’s a symbol of how freaked out all these really smart people are about the state of the world. According to the group’s website:

The Doomsday Clock is an internationally recognized design that conveys how close we are to destroying our civilization with dangerous technologies of our own making. First and foremost among these are nuclear weapons, but the dangers include climate-changing technologies, emerging biotechnologies, and cybertechnology that could inflict irrevocable harm, whether by intention, miscalculation, or by accident, to our way of life and to the planet.

There’s no rigorous calculation behind where that fateful minute hand lies, and when Scientific American asked Bulletin editor John Mecklin about what does go into the decision, he was a little light on details:

What he is willing to say is that it is not just some people in a room sitting around saying “Hey, how worried are you? I’m really worried. I’m like, a whole minute more worried than I was last year.” “Yeah, not me. I’m still in a three-minute state of mind.”

On the other hand, said Mecklin, “It’s not a numerical answer we got by running some sort of equation or anything. It’s the best judgment of really top experts who really know these situations at a granular level.”

The group released an official statement detailing some of the key world events that played into their deliberation. It mostly focused on the Iran nuclear deal, which they deemed a positive note in a year that otherwise “abounded in disturbing nuclear rhetoric,” and the Paris climate deal, which they — like us — said was good but not good enough.

On the subject of nukes, Mecklin told Scientific American that “the idea that a thermonuclear war of any size is not a direct threat to civilization is just wrong.” A nuclear winter brought on by as few as 50 to 100 bombs could basically starve live on Earth, he said, and despite the Iran deal, there are still a hell of a lot of nukes out there.

As for climate change:

Even on our present course, Mecklin said, there’s admittedly a fair amount of uncertainty about exactly what’s going to happen, and how fast. “But if you take a moderately worst case view,” he said, “we run the risk of famines, droughts, mass migrations of climate refugees.” It’s no exaggeration at all, he says, to suggest that civilization would be drastically affected. This isn’t quite the same as being destroyed, but point taken.

But remember: This whole Doomsday Clock thing is neither a real clock nor any real measure of how close we are to the end of days. That said, the people behind it — the timekeepers, as it were — are pretty damn smart. And the people with whom they consult are also pretty damn smart (at least 16 are Nobel laureates, according to Scientific American). So while this isn’t really a thing, it’s also kind of a thing.

And with that, I leave you to your angst: