Former administrators say Pruitt’s impact on EPA can be reversed 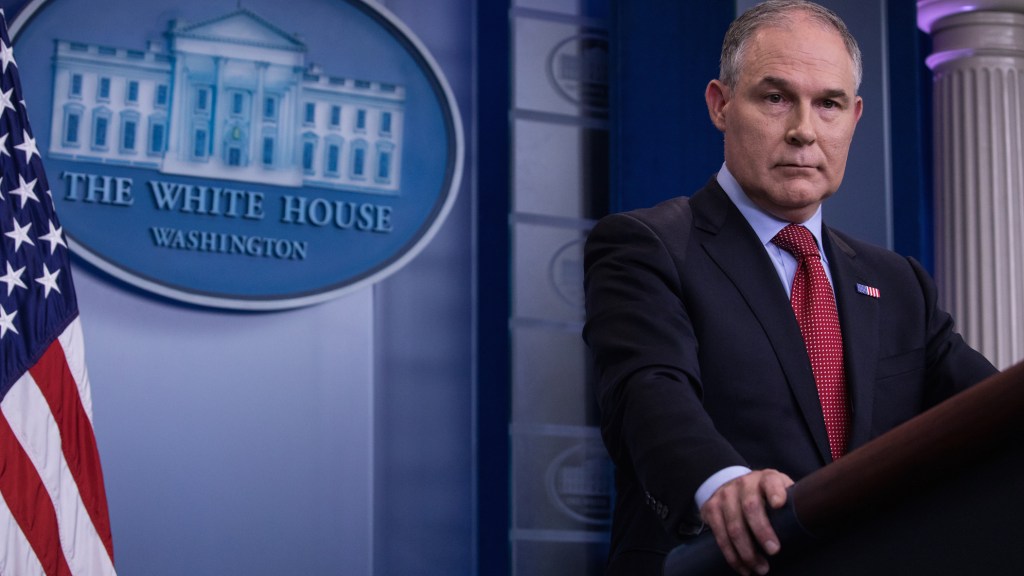 Former administrators say Pruitt’s impact on EPA can be reversed

Amid a deluge of ethical scandals, EPA Administrator Scott Pruitt seems to be on the ropes, teetering between his apparent propensity for corruption and his perceived effectiveness as President Donald Trump’s master de-regulator.

Recent articles in The New York Times, Politico, and The New Republic point out that from a policy standpoint, a lot of what Pruitt’s done may not survive in courts or outlive his tenure. Basically, all of those splashy repeals of Obama-era regulations may not hold up because Pruitt often moves too quickly and poorly crafts his regulations. Other times, he simply trumpets a proposed change that could take years to come to fruition. For example, Politico points out that Pruitt’s announced intention to roll back car-emission regulations set by the Obama administration won’t happen anytime soon. Plus, it’s likely to face legal challenges.

But when Pruitt does leave the EPA, he will not leave it unscathed. Two former EPA chiefs tell Grist that, from a gutted staff to the agency’s recent disregard for science — the very principle that’s supposed to guide the organization — a major rebuild will be necessary when a new presidential administration takes office. It could take time, they say, but they both noted the EPA could rebound from its current state.

“Their biggest rebuilding is going to be in staffing,” says Christine Todd Whitman, who served as EPA administrator from 2001 to 2003 under President George W. Bush. “They’ve lost a lot of career staff — people who were dedicated to protecting the environment and have just been so frustrated that they have moved on. Once you lose that institutional knowledge, it’s very hard to rebuild.”

In a complicated government agency, this knowledge is particularly vital. With its credibility undermined, she says convincing people of the importance of working at the EPA could be challenging.

“Every week I hear about another person leaving and these are sort of the bread and butter of the agency — they have historic knowledge, the intellectual background to do the work,” adds Carol Browner, who was EPA administrator for President Bill Clinton’s entire eight-year term. “My sense is that they want these people to leave, so they’re making life miserable.”

Browner explains that Pruitt has dismantled the agency’s reliance on science, which is supposed to undergird the EPA’s decision-making. “There’s a lot of damage being done to scientific integrity and the sort of scientific body of work that’s available to the agency making pollution decisions,” she says.

As evidence, Browner points to Pruitt’s announcement last month to disregard studies using nonpublic data, such as databases of medical records that legally need to remain confidential, in EPA analyses. These studies, she says, have been vital in better understanding public health and pollution — a position echoed by Gina McCarthy, Pruitt’s immediate predecessor at the agency.

“He’s really shrinking the amount of science that will be available for important decisions,” Browner says, “I think it’s an intentional move.”

She adds that regulation enforcement is also down. A New York Times analysis showed that in the first nine months of Pruitt’s tenure, the number of civil cases brought by the EPA fell by a third compared to the same period under Obama’s first EPA administrator, Lisa Jackson. (The number of cases was down a quarter compared to the first nine months Whitman was on the job.) The analysis also found Pruitt’s EPA has gone after fewer civil penalties from polluters, and it’s ordered fewer factories make retrofits to lessen emissions.

In the face of these issues, paired with Pruitt’s ethical scandals, trust in the EPA will inevitably have to be rebuilt. But the current administrator’s reputation as a tool of industry could actually be a benefit in building back the agency he’s decimated.

“Everytime that they take a step that flies in the face of protection, it becomes an opportunity for the next administration to really rebuild public trust,” Browner says.

Trust within the agency is another big project awaiting a post-Trump administrator. Whitman notes that Pruitt’s antagonistic agenda has demoralized the EPA’s workforce. Restoring the morale and mission of the EPA will be critical to getting it back on track.

“A strong new president with a new administrator who actually believes in the role of the agency—which Scott Pruitt clearly does not—that will make a big difference,” Whitman says. “It can come back. It will come back.”