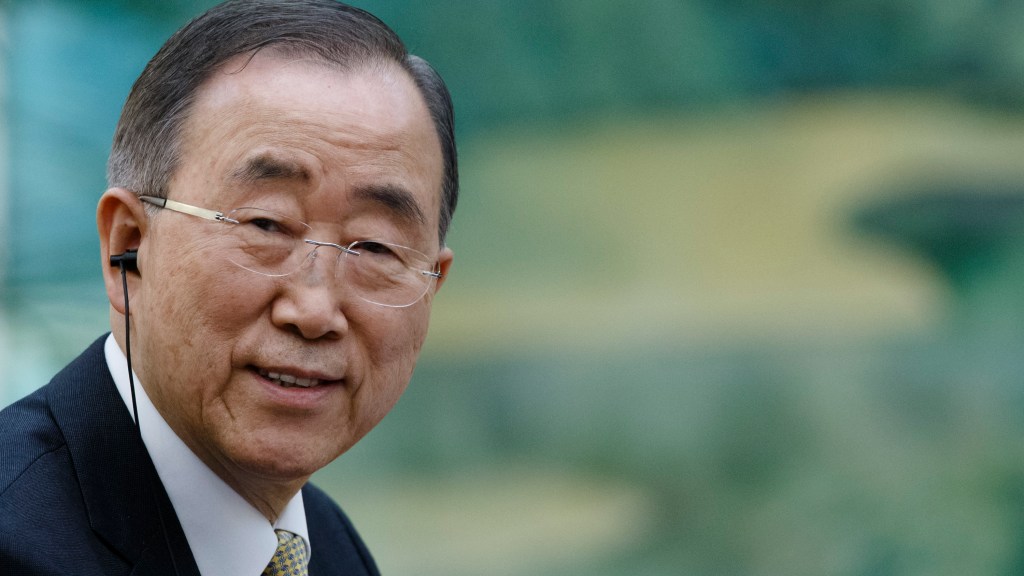 Former U.N. Secretary-General Ban Ki-moon became the first major international diplomat to throw his weight behind the so-called Green New Deal, a nascent effort by left-wing Democrats to zero out planet-warming emissions and end poverty over the next decade.

In an interview with HuffPost, Ban — now the co-chair of the newly launched Global Commission on Adaptation, a cadre of top world leaders slated to host a summit next year in the Netherlands — called the push “a very, very good initiative.”

“I would strongly support it,” Ban said by phone Wednesday afternoon from the World Economic Forum in Davos, Switzerland. “This kind of initiative is good.”

He held the movement in stark contrast to the climate agenda President Donald Trump has pursued, aggressively bolstering fossil fuel production and announcing a withdrawal from the Paris climate accord. He called the Trump administration “very worrisome.”

“It is very important that the people should speak out,” he said. “I have always been urging that there should be the policies of a civil society heard loud and clearly all around the world.”

Ban, 74, made climate change a priority during his term as the United Nations’ eighth secretary-general from January 2007 to December 2016. In 2008, as much of the developed world slid into the Great Recession, the South Korean diplomat urged international leaders to enact a Green New Deal, which he defined as “an investment that fights climate change, creates millions of green jobs, and spurs green growth.”

The concept caught on. Barack Obama, then a presidential candidate, called for a Green New Deal on the campaign trail. Labour Party activists began laying the groundwork for a government-run green investment bank in the United Kingdom. By 2009, the United Nations drafted a report calling for a Global Green New Deal.

But in 2010, austerity politics swept across the Atlantic. In the United States, Democrats came close to passing a cap-and-trade bill — a conservative market mechanism for curbing climate-altering emissions — but ultimately backed down. The term “Green New Deal” remained core to the U.S. Green Party’s platform, but away from the political fringe it all but disappeared.

That is, until 2018. A spate of left-wing Democrats revived the term and imbued it with a new sense of urgency and a much broader scope, calling for a rapid transition to 100 percent renewable energy and a guarantee of union-wage jobs for the millions of Americans struggling to survive as income inequality worsened. Representative Alexandria Ocasio-Cortez (a Democrat from New York) became the most prominent supporter, and at least two top Senate Democrats are now working on legislation. At least half the declared 2020 candidates for president now say they support a Green New Deal in some form.

On Wednesday, Ban stopped short of critiquing the longstanding dogma, among both Democrats and the few Republicans who acknowledge the realities of climate change, that says market-based tweaks, such as putting a price on carbon, are the only politically feasible paths to cutting emissions in the United States.

“There have been many discussions on how to address climate — cap-and-trade, carbon trading, carbon taxes,” he said. “Any such ideas which merit some deep discussions … that should continue.”

The remark bucked with the U.N. Intergovernmental Panel of Climate Change, which determined in October the world has roughly a decade to halve global emissions or face cataclysmic warming of at least 2.7 degrees Fahrenheit, and likely much more. At a news conference, two authors of the IPCC report laughed when asked if market-based policies alone could deliver the cuts needed.

Asked whether the fossil fuel industry should be barred from future climate talks, Ban said no, despite widespread criticism of oil and gas companies’ deep-pocketed efforts to upend climate policies in the United States and elsewhere.

“I don’t think those people should not be allowed to participate,” Ban said. “They should listen to the voices of the people. These climate talks and climate conferences are open to everybody, so … we should welcome them.”