Florida has a new climate champion. Is he for real? 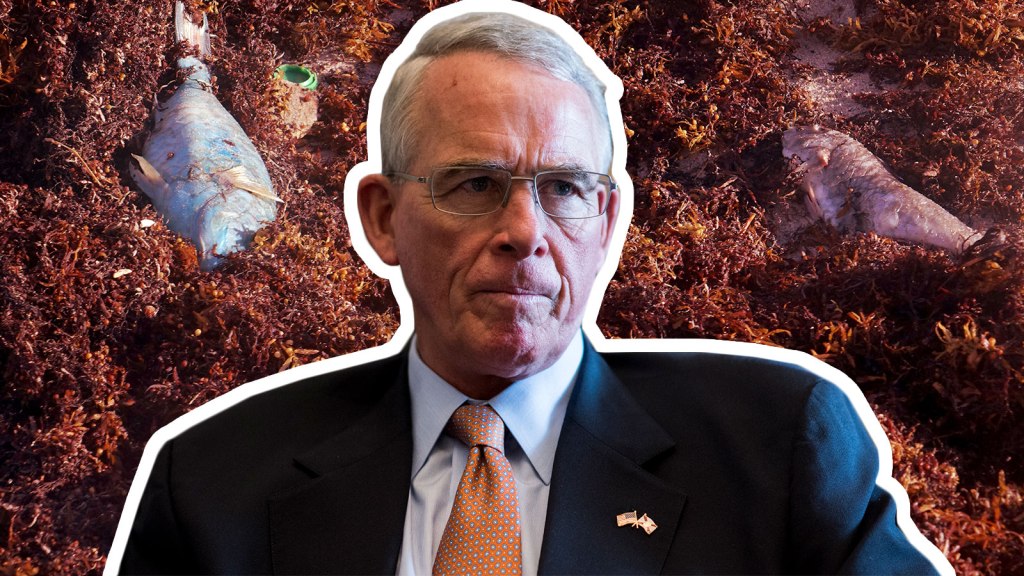 Florida has a new climate champion. Is he for real?

Francis Rooney was elected in 2017 to serve Florida’s conservative 19th district in the U.S. House of Representatives. He beat his Democratic opponent Robert Neeld handily, using momentum from the Trumpian red tide to hammer home points about “American strength.” But a calendar year into his tenure, the representative is grappling with another red tide: a toxic algae bloom that has been inundating Florida’s coast since pretty much the minute Rooney took office. The bloom has enraged voters and threatened the state’s tourism industry — its No. 1 economic driver.

That could be a big factor in Rooney joining the Climate Solutions Caucus last week, adding his name to a growing list of Republican representatives who have joined the group. But as coastal states across the country grapple with climate-fueled hurricanes, wildfires, and algae blooms, is Representative Rooney actually serious about taking action on behalf of his sinking, muck-inundated state? Or is this another example of political peacocking?

The Climate Solutions Caucus (CSC) is like the Noah’s Ark of congressional climate bipartisanship — it’s a growing group of 90 representatives that includes a Republican for every Democrat. The organization was founded by Floridians from opposite sides of the aisle and now includes six Republicans from the state. The group’s goal? “Explore policy options that address our changing climate.” And that’s just what the caucus has been doing: exploring, not much else.

In some cases, the members of the caucus can’t even be bothered to talk about climate change. The U.N. Intergovernmental Panel on Climate Change published a seminal report on Sunday saying we only have 12 years to head off the most catastrophic effects of global warming. None of the group’s Republican members have so much as tweeted about the major report (and only a handful of the Democrats have weighed in).

The House of Representatives put forth an anti-carbon tax resolution in July. A whopping 39 of the 43 Republican members voted for that resolution denouncing carbon taxes. It passed with flying colors.

That’s why some environmentalists let out a groan when the group announced it had wrangled Rooney. The representative voted pro-environment zero times his first year in office, which earned him a whopping 0 percent score from the League of Conservation Voters, an organization that keeps tabs on how elected officials vote on the environment. But Andres Jimenez, senior director of government affairs at Citizens Climate Lobby, says Rooney’s score isn’t a good roadmap for what’s ahead. And as Florida grapples with climate change (and it’s voters grapple with an algae bloom), the way Rooney votes in the next Congress may tell an entirely different story.

“Folks on the outside are saying [the members] aren’t doing much, they’re using [the climate caucus] for elections,” says Jimenez. “But it’s a step-by-step-process.” Already, Rooney’s recent votes indicate a change of heart. While he cast zero pro-environment votes in 2017, he voted green six times this year — including a vote against the aforementioned anti-carbon tax resolution.

Of Rooney’s past voting record, Jimenez says: “He’s a new member of Congress; I think he was just trying to get his feet wet and figure out exactly what his role would be and where he wanted to land on many issues.” If Rooney follows through on his newfound dedication to environmental issues, it won’t just be a shift; it’ll be a 180. But Jimenez says that’s exactly the kind of flip that we should be expecting. “He’s been very vocal about using next Congress to be the Republican leader in Florida on environmental issues.”

This likely won’t be the last time we see a politician in a climate change-ravaged state change their minds (or at least say they’re changing their minds) about environmental policy. According to Jimenez, environmental disasters have a galvanizing effect on politicians. “Big events like those that have happened in Florida, New York, the Carolinas, those are all leading members to introduce legislation around these issues. There’s definitely a correlation there.”

The folks over at League of Conservation Voters who have been keeping tabs on these newly climate-woke politicians aren’t quite convinced. “Politicians on both sides of the aisle are realizing that opposing climate action is a liability in Florida,” says Alyssa Roberts, national press secretary for the organization, “although some are more genuine than others.” She adds: “It’ll take more than talk to fight the climate crisis.”