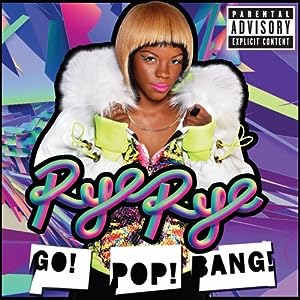 I love good hip-hop. I love good dance and club music. But as I’ve grown older (I recently turned 1,000), I’ve lost the will needed to wade through all the terrible hip-hop and dance music out there to find the good stuff.

I can’t tell if it’s me or the music, but at least from where I’m standing, hip-hop and club music have both gotten obsessed with being “hard,” which to my aging ears means “unpleasant. ”

Also, get off my lawn.

Anyway, this all by way of saying I’ve been enjoying Rye Rye’s debut album Go! Pop! Bang! Just because, as the title would indicate, it’s fun. It’s got some of that “girls hanging out and dancing on a stoop in Brooklyn” kind of vibe — though, y’know, Rye Rye is from Baltimore.

She actually recorded the album a few years ago but label troubles kept it from coming out. Amazing how fresh it still sounds.

Anyway. Today keeps trying to be depressing. There was a horrible shooting in Colorado this morning. It’s gray and rainy here in Seattle again. Blech.

But dammit! It’s my 11th wedding anniversary and I’m determined to drag some good vibes into the mix. So here’s a track called “Sunshine.”