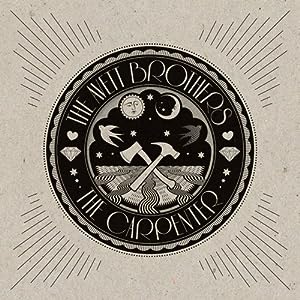 There’s no band I have gushed over more than The Avett Brothers. I even wrote a cover story about them for another magazine, which you can check out here.

So, yeah, there’s not much left to say. They’re awesome!

And they have a new album out, called The Carpenter. It is also awesome.

It’s the second disc they’ve done with producer Rick Rubin, and it’s not much of a departure from the last one, I & Love & You. In interviews about it, they’ve been playing up the rockiness of it, citing Soundgarden and whatnot, so I was actually expecting more high-tempo stuff. But while there are a few rock songs — electric guitar makes several appearances, a first for them — it’s roughly the same balance: There are some sweet, sentimental strummers, some boppy, snappy pop tunes, and a few rock-esque departures. It won’t shock any of their fans. (I’d love for them to do a real rock album someday.)

As I said about the last one, I sort of miss the ragged, improvisational feel of their early albums. Rubin has given them a smooth polish, an almost chamber-pop feel, which has made for some great songs but can get a little stuffy at times.

The cure for that, though, is to see them live. I got to see them a few weeks ago and was blown away all over again. You won’t see a better live band anywhere today — I guarantee it.

Anyway, regardless of the album’s other merits, it is to be treasured for bringing us the lead track, “The Once and Future Carpenter,” which is the kind of song people will still be listening to 50 years from now. Just a timeless classic, right out of the gate. Listen:

Guam is entirely infested with spiders, and it’s all the fault of invasive snakes