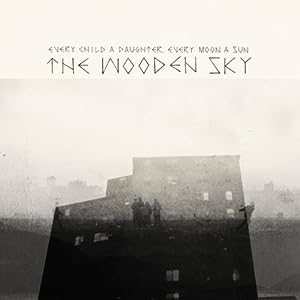 I had just gotten done compiling my best of 2012 music mix when I stumbled across the new album by The Wooden Sky, a band out of Toronto. (I’m telling you, good indie music is Canada’s greatest export. Way better than tar sands.) Now I feel bad, because this is one of the best things I’ve heard all year. I may have to sneak it on my 2013 mix.

The band’s been around a while — their newest album, 2012’s Every Child a Daughter, Every Moon a Sun, is their third full-length — but they are new to me. The album is only available as an import, which suggests that they haven’t exactly caught fire in the U.S. market, but damn, that needs to change.

I can’t pin down exactly what has so caught my fancy about this album, which I’ve been spinning obsessively, on repeat, for about a week now. It’s pretty typical indie folk, mostly strummed guitars, a little steel guitar or fiddle here an there, and a mournful beardy dude singing with the occasionally lovely female harmony. (Yes, that describes 90 percent of the music I listen to.) But it’s just haunting, and so ear-wormy, and they lyrics are so finely wrought. I really, really want to see these guys live.

I had real trouble picking one song, but this one, "The Night Goes On and On," is fairly representative: