Gigantic water tunnels won't save Houston from the next Harvey 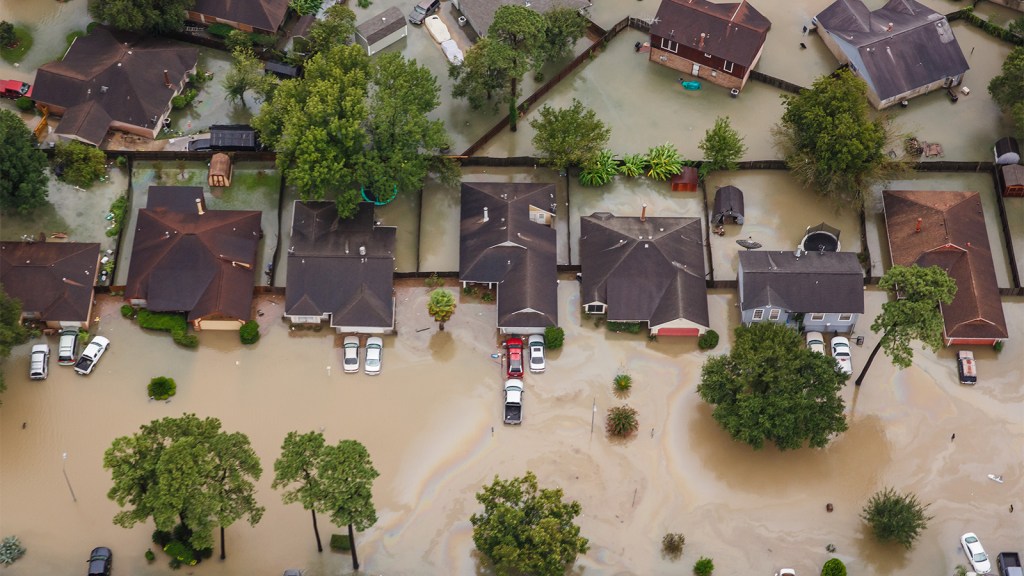 Gigantic water tunnels won’t save Houston from the next Harvey

Houston is just seven months removed from the worst flooding disaster in U.S. history. With this year’s hurricane season just a few weeks away, it’s worth remembering that it’s only a matter of time before the next big flood.

So Houston needs a plan for what to do about its ever-wetter reality as soon as possible. The question is, which plan?

There are basically two paths to take: Embrace the floods, plan for the long term, and sketch out a different vision of life in a megacity built on a swamp. Or double down and start an arms race to battle the sky. So far, it looks like Houston is choosing option No. 2.

The Harris County Flood Control District, the agency tasked with managing the area around Houston, is considering a gargantuan infrastructure plan to reduce the threat of future flooding. It would involve drilling massive stormwater tunnels 100 to 200 feet below the ground to funnel water directly to the Gulf of Mexico through a system of pumps. The idea isn’t winning over many urban planners, though.

“This strategy is like dumping water from an overflowing bathtub right back into the bathtub,” says Monica Rokicki-Guajardo, an urban design consultant who until recently was based at the University of Houston.

What’s needed is an expansion of official flood zones to reflect the best available current science, buying out private property in the expanding flood plains, and embracing a soggy future. That approach, too, is getting support from the county but not nearly enough. Most importantly, a good plan needs to make sure that limited funds are justly distributed to the communities of color and low-income families most burdened with a structural problem not of their own making.

This philosophical clash — build tunnels or plan a careful retreat — is perhaps the first major skirmish pitting climate adaptation against climate mitigation in a major U.S. city. The outcome could set the tone for decades to come. Knowing what we know about human nature and denial, a Texas-sized arms race against the sky feels all but inevitable.

Harvey wasn’t Houston’s first big flood, but it was definitely the most dramatic. After a week’s worth of unceasing rains, America’s fourth-largest city was almost entirely underwater. Downtown Houston is just 50 feet above sea level and sinking rapidly. For a huge chunk of southeast Texas the size of New Jersey, Harvey produced rains not expected more than once in a thousand years in a stable climate.

But we don’t have a stable climate. Since the 1950s, the Houston area has seen a 167 percent increase in heavy downpours. In a little more than two years, Harvey was the fifth 100-year rainstorm — weather so severe that each storm was expected to occur just once in 100 years under “normal” conditions.

But there is no normal rainstorm anymore. The warming atmosphere, with its enhanced evaporation rates and greater capacity to hold moisture, made Harvey’s rains about six times more likely. And it’s likely to get worse. Climate change will continue to coax epic rains from the Texas skies with quickening frequency for at least the rest of this century.

Climate change is a water story. Around the world, people have been trying to engineer their way out of this mess. California already has the world’s largest public system of aqueducts and canals, funneling water away from the lush north toward the farms and deserts and cities of the south. Tokyo, with its creepy underground floodwater storage system, is a generation ahead of Houston when it comes to planning for the inevitable. Chicago sits somewhere in the middle, with about $3 billion already invested in a massive floodwater diversion system not expected to be completed for another decade.

Last month, Harris county officials approved more than $100,000 to study the tunnels project, which would cost billions of dollars and take years to construct. The idea has the support of the city’s Republican member of Congress and his Democratic challenger. Elon Musk also quickly chimed in his enthusiasm on behalf of his tunnel-drilling company, because of course he did.

The city is moving slowly, partly because the problem is so immense. A billion-dollar bond issue for flood preparedness will likely go up for a vote later this year, and the U.S. Army Corps of Engineers must also decide how to spend $15 billion approved by Congress to help Texas recover from Hurricane Harvey.

Engineering responses to climate change almost always come with unintended consequences and exacerbate inequality. Instead of this massive project, Houston could implement basic regulation of development and expand green spaces to reduce flooding. In this vein, Rokicki-Guajardo suggests a whole list of things to try, such as reclaiming the region’s extensive wetlands, providing incentives for lower-income Houstonians to retrofit their homes or move out of flood zones while respecting place-based community ties, and aggressively rezone the city to hold wealthier landowners accountable for the increased flooding they cause downstream through runoff.

Houston is already the sprawliest, floodiest city in America. There are entire neighborhoods built within the city’s main flood storage reservoirs. Put part of the blame on the broken federal flood insurance program, which works at odds with responsible development as it encouraging expensive rebuilding in flood plains. One house in the Houston area flooded by Harvey had previously been flooded and rebuilt 22 times.

It’s important to ask how a place like this might radically transform in 20 years to become a model, instead of a head-in-the-sand monument to business as usual. We need cities at the forefront of policy innovation to confront the urgency of climate change. As long as our response is “it’s not working, so let’s do it more of it,” we’re sunk.