Former Iowa Gov. Tom Vilsack (D) has added another “former” to his list of titles by withdrawing from the 2008 presidential race. But before he folded, citing financial concerns, Grist’s Amanda Griscom Little interviewed Vilsack — a vocal opponent of the Iraq war — about his surprisingly aggressive energy plan [PDF], ethanol’s future, and more.

Other Democratic candidates, Sens. Obama and Clinton in particular, seem to be putting emphasis on energy and the environment as well. How do you think your record compares to theirs?

What motivated you to come out with such a comprehensive energy proposal so early in the game?

Primarily the fact that energy security is the most important domestic issue facing the United States.  We’ve been talking about this challenge for decades, and it’s time we get very serious about it.

This is a strategy not just to meet our energy needs in a way that’s environmentally sound, but also to ensure that we never send young men and women to war over oil as we have in the past and we appear to be doing right now in Iraq.

Some of your speeches indicate that you decided to run for president because of the energy issue. Is that right?

That’s one of the reasons. I’ve seen the benefits of building a renewable fuel industry not just to the environment and not just to farmers, but generally to manufacturing and to the economy as a whole in my state. I believe that this is a way to make sure that the American middle class continues to grow as opposed to contract — as it has in the last six years.  I want to make sure that the gap between the richest Americans and the poorest Americans doesn’t continue to grow, and this is one strategy for addressing that.

Tell us in more detail how you propose to achieve the 75 percent reduction in greenhouse gases by 2050.

It’s a graduated process toward virtually eliminating our dependence on petroleum for our transportation systems in the country. The first step is to say to those that are producing fuel today that they’re going to have to do it in a way that reduces carbon emissions, starting in 2010, 1 percent a year for the next 10 years. We substantially increase our commitment to renewable fuel and energy by eliminating gas and oil tax breaks and redirecting the revenue from those tax breaks into a fund that will be used to spur research and development of new technologies. Meanwhile, we begin the process of transitioning to automobiles and vehicles that are 50 percent more efficient, and ultimately compel power companies to produce power in a carbon-free way.

That last item is particularly striking. Your plan includes a mandate that all new power plants be carbon-free by 2020. Can you elaborate on that?

We’ve seen in Iowa an expansion of wind energy where approximately 10 percent of our energy is in fact now produced from renewable sources. And that was done with relative ease.

I would balance the mandate with incentives. It seems to me if we put more emphasis on the research-and-development side and create incentives at the federal, state, and local level for transitioning to renewable sources — including rapid expansion of wind, solar, geothermal, as well as coal gasification and other strategies — that we can significantly reduce emissions. If we, in turn, invest and provide resources to energy companies to invest in new technologies, the current coal-gasification process and other similar technologies can be perfected and we can ultimately eliminate the emissions.

Do you think it’s economically viable to make new power plants carbon-free by 2020?

I think it’s economically viable, and most importantly of all I think it’s a moral responsibility on the part of America to lead this effort to become carbon-free in terms of power production.

One of the concerns I have is that the United States of America can do everything right in terms of energy policy, and if the rest of the world doesn’t follow suit, it won’t make much difference in terms of climate change and climate security. And so it’s going to be incumbent for us not only to develop the technologies first, to use them extensively and aggressively, but also then to use our knowledge as a way of encouraging the international community to follow suit, and use the capacity of this country to trade with other nations.

When you realize that China is breaking ground on one new power plant a week, and these are coal-fired plants [built] without much concern about the environment, you can tell that we really have to address this international issue aggressively.

It sounds like you not only dismiss concerns that drastic reductions in CO2 could cripple the economy, but you say this is necessary to make the economy competitive.

I think it’s really misplaced to suggest that this is going to cripple the economy. This is America. America has always survived and thrived on innovation and creativity. But we have been stagnant in terms of innovation in recent years relative to our economic competitors.

Just take a look at telecommunications: We were No. 1 in the world in internet access, we’re now 16th in the world. Look at our auto industry, which is one of our principal industries in this country, obviously reeling from competitive challenges from automakers overseas.

It’s important and necessary for us to accept this large challenge, to take it to heart, and to be the America that’s a strong, secure, creative, innovative, challenging risk-taker.

Boosting ethanol production is a central component of your energy plan. What do you think are the environmental costs and benefits of corn ethanol compared to gasoline?

I think corn was a great way to start the conversation on renewable fuel. It was a relatively easy product to extract the necessary ingredients to make ethanol from and it was something     we grew in abundance. But we can’t grow enough corn, and I think there are more efficient ways over time to produce ethanol from biomass with less stress on the environment, less use of water, less use of fertilizer.

That’s why I’m pleased to note that my state, through efforts that were announced when I was governor, will be the first state to have a biomass facility that will begin transforming corn stalk and the hull of corn into ethanol, and I think over time you’re going to see other biomass products being used, which will be far more efficient. Switchgrass, for example, has the capacity to produce six or seven times more ethanol per acre than corn.

How do you propose to phase out corn ethanol and bring in cellulosic?

Our plan calls for a 25-cent-per-gallon credit for the production of ethanol from cellular fiber.  Currently, there is a 51-cent-per-gallon blender credit, which is taken by any entity that blends ethanol into gasoline.  Our 25-cent-per-gallon tax credit would be on top of that and would go directly to cellulosic-ethanol producers to grow the market and get the industry going strong.

How long do you think it would take to switch the ethanol industry from corn to cellulosic?

I think it’s pretty clear that it’s going to take some time. It’s not going to happen overnight, but it’s beginning to happen, and I think over the course of the next decade you’re going to see the expansion of cellulosic ethanol, no question about it.

So maybe by mid-century we could wean entirely off of corn?

Well, I don’t know, but our goal is to have 60 billion gallons of renewable fuel produced by 2030, and 45 billion of that from non-corn sources such as cellulosic ethanol, bio-butanol, and biodiesel. So we obviously want to be aggressive in terms of promoting this.

Should corn subsidies be shifted to other crops to encourage the switch to celluslosic?

Not necessarily. I think we’ve got to take a look at the way we subsidize corn-based ethanol, tying it to the price of oil, so if oil prices are significantly higher than they are today, then perhaps there’s no need for a subsidy. But when the oil industry and oil-producing countries undercut the renewable-fuel industry by artificially lowering the cost of petroleum, then we probably ought to be looking at aggressive assistance from the government.

How central of a role does nuclear power play in your energy plan?

We haven’t specified that yet. I don’t think you can take nuclear off the table as part of the solution, but I do think there are certain risks that have to be addressed before you see that as a complete answer. There are certain homeland-security risks and concerns — from the safety and security of plants to the issue of waste — which have not been resolved.

Would you support a carbon tax or gas tax?

I don’t know that we necessarily need to provide taxes. I think a more effective way, at least based on my experience, is to provide incentives.

Iowa has a substantial farm industry. What would you do as president to support family and organic farming?

I think it’s a strategy that clearly needs to be part of the agricultural plan for the future. My hope is that we transform from the traditional farm policy to a food-and-farm policy that encourages greater diversity in agriculture, including incentives for food production and enhanced conservation practices.  I also think we ought to be looking at changing the way we subsidize agriculture generally, from a commodity-based process to a conservation-based process, which would benefit organic farms as well.  I believe this type of transition in farm policy is key to developing opportunities in rural communities.

On a personal level, what steps do you take to reduce your energy use and environmental footprint?

My wife and I are currently driving a hybrid. Our son Doug for our Christmas present gave us 14,000 miles of carbon credits, so we’re offsetting the miles we put on the car as we drive around Iowa campaigning.  Our campaign is trying to offset the carbon we’re producing with investments in new, clean technology.

Updated 22 Aug 2008 In the early months of Barack Obama’s presidential campaign, enviros were skeptical of his (now heavily qualified) support for coal-to-liquids technology and unvarnished enthusiasm for ethanol, but he earned their respect with his aggressive climate and …
How green is your candidate? Info on the 2008 presidential contenders

This is part of a series of interviews with presidential candidates produced jointly by Grist and Outside. Barack Obama at an Earth Day 2007 event. Photo: Michael Millhollin In his two and a half years in the U.S. Senate, Barack … 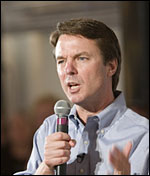 A look at John Edwards’ environmental platform and record

Update: John Edwards dropped out of the presidential race on Jan. 30, 2008. During his single term representing North Carolina in the U.S. Senate, John Edwards received a middling 63 percent rating from the League of Conservation Voters — a …
See all articles in this series