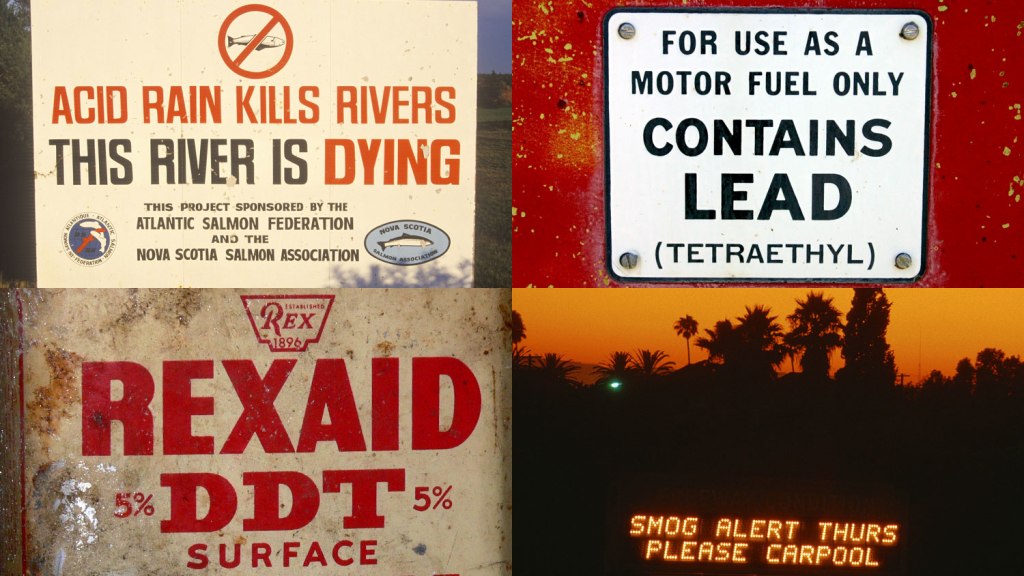 Acid rain. Toxic leaded gas fumes. Dangerous DDT. Rampant air pollution. These environmental challenges once seemed impossible to meet, and they put our nation’s air, water, and land at risk — not to mention our families’ health. The dangers they posed were real, but you probably haven’t heard about them in a while. There’s a good reason for that: We put smart policies in place to fix them.

So this Earth Day, here’s a reminder of a few of the environmental challenges our nation has conquered with EPA leading the way, and a look at where we’re headed next.

Caused by air pollution mixing with water vapor in the atmosphere, acid rain was once poisoning our rivers and lakes, killing fish, forests, and wildlife, and even eroding our buildings. The 1990 amendments to the Clean Air Act gave EPA the authority to regulate sulfur dioxide and nitrogen oxides, the pollutants causing acid rain, from power plants. The EPA developed the first market-based cap-and-trade pollution reduction program, and guess what — it worked.

Despite the doomsday warnings from some in the power industry that the regulations would cause electricity prices to spike and lead to blackouts, over the last 25 years, acid rain levels are down 60 percent — while electricity prices have stayed stable, and the lights have stayed on. Thanks to hard work by EPA, states, and industry, our nation has put policies in place to solve the problem over the long haul.

For decades, leaded gasoline threatened the air our kids breathed. Lead from polluted air was absorbed into their bloodstreams, endangering their brain development and risking consequences like permanent nerve damage, anemia, and mental retardation. So EPA phased out leaded gas. Back in the late 1970s, 88 percent of American children had elevated levels of lead in their blood. By the mid-2000s, that number had dropped to less than 1 percent.

The bald eagle once faced extinction. The culprit was DDT, a powerful pesticide that made birds’ eggshells too weak for the chicks to survive, and also caused liver cancer and reproductive problems in humans. EPA banned the use of DDT in 1972, and since then, bald eagles have made a huge comeback — they were removed from the Endangered Species List in 2007 — and our families are safer from harmful chemicals.

A newspaper headline once called the smog shrouding Los Angeles “a dirty gray blanket flung across the city.” L.A. and many other cities were choked by severe air pollution — leading to asthma, respiratory illness, and certain cancers. But over the last 45 years, we’ve cut air pollution 70 percent, while our nation’s economy has tripled. It goes to show that a strong economy and a safe environment go hand in hand. One recent study found that thanks to the strides we’ve made in cutting air pollution in just the last two decades, children’s lungs in Southern California are 10 percent bigger and stronger today than they were in children 20 years ago.

Last fall, we built on that success by proposing stricter standards for ozone pollution to protect those most vulnerable — children, the elderly, and those already suffering from respiratory illnesses like asthma. For our kids, that means avoiding up to a million missed school days, thousands of cases of acute bronchitis, and nearly a million asthma attacks. Adults could avoid hundreds of emergency room visits for cardiovascular reasons, up to 180,000 missed work days, and 4 million days where people have to deal with pollution-related symptoms. Every dollar we invest in these standards would return $3 in health benefits.

And now, EPA is taking action on another major environmental challenge: climate change. The carbon pollution driving it comes packaged with other dangerous pollutants like smog and soot that can cause asthma and certain cancers, especially for those living in the shadow of polluting industries.

When we finalize our Clean Power Plan this summer, we’ll not only cut carbon pollution from power plants, our nation’s largest source, but we’ll also reduce those other dangerous pollutants and protect our families’ health. When we act, we also help safeguard communities from the impacts of climate change — like more severe droughts, storms, fires, and floods.

Time after time, when science has pointed to health risks, EPA has obeyed the law, followed the science, protected public health, and fortified a strong American economy. We’re doing the same thing today. Our track record proves that when EPA leads the way, there’s no environmental challenge our nation can’t meet.

Gina McCarthy is administrator of the U.S. Environmental Protection Agency.