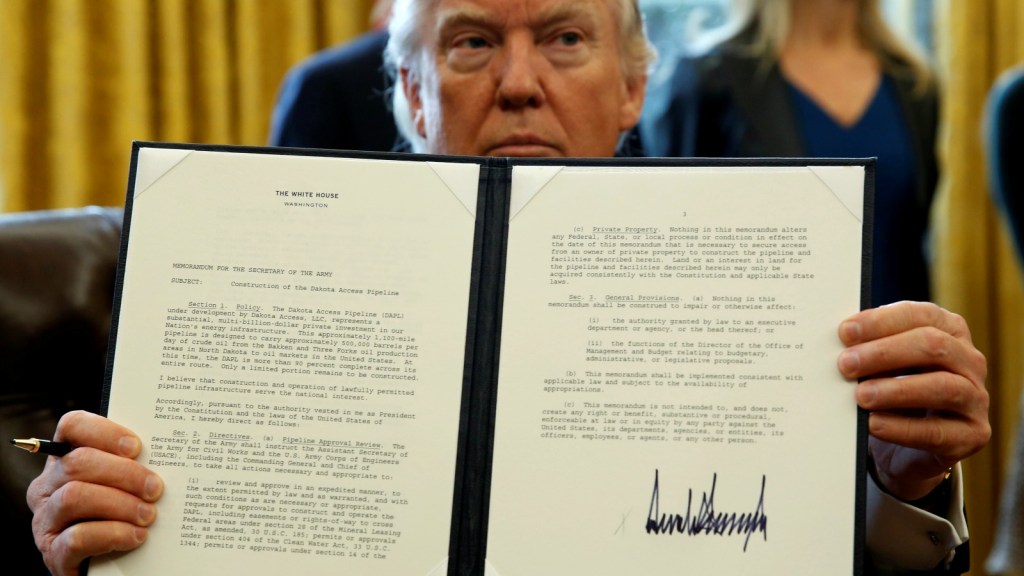 The Standing Rock Sioux Tribe and the pipeline industry have been locked in bitter dispute over the Dakota Access Pipeline. The 1,172-mile pipeline is nearly finished, except for a section that would cross under Lake Oahe, which the tribe relies on for water. But this week, they were on the same page: They agree Trump’s executive actions will likely lead to authorizations first for the Dakota Access Pipeline and then other big projects.

On Tuesday, the president signed a memorandum instructing the U.S. Army and the Army Corps of Engineers to “review and approve in an expedited manner, to the extent permitted by law and as warranted, and with such conditions as are necessary or appropriate, requests for approvals to construct and operate (the Dakota Access Pipeline).” It also directs the Army to “consider, to the extent permitted by law,” whether to rescind the Obama administration memorandum that stalled construction last month. Following that memorandum from the Assistant Secretary of the Army for Civil Works, the agency on Jan. 18 issued its notice of intent to prepare an environmental impact statement and asked for public comment due Feb. 20 before deciding whether to allow an easement needed to complete construction. The Trump memorandum also asked the Army to consider dropping that environmental impact statement.

Trump’s presidential memorandum on the Dakota Access Pipeline is full of legal language and doesn’t directly order the permit necessary for the pipeline to be completed. Still both sides concede that it paves the way for the pipeline to go ahead, probably more effectively than a direct order would have.

Industry representatives say the muted language will make it harder for successful legal challenges once the Army approves the pipeline. The president also signed another memorandum in support of reviving the Keystone XL pipeline to bring tar sands oil from Alberta, Canada, and an executive order mandating that environmental reviews of infrastructure be expedited. “They did it for strategic reasons,” says John Stoody, a vice president of the Association of Oil Pipelines. “While the memorandums look vaguer on the surface (than directly ordering an easement), they’re actually stronger legally and have a better chance in resulting in a positive outcome.” Industry officials heralded Trump’s actions as an early indication that a new era of job-creating infrastructure projects has dawned.

The Standing Rock Sioux’s chief lawyer, Jan Hasselman, says under a straightforward reading of Trump’s Dakota Access Pipeline memorandum, the Corps should still go forward with the full environmental impact statement and additional consultation with the tribe as ordered by the Army. That would take many months. “Do I think that’s what’s going to happen? No,” Hasselman, an attorney for Earthjustice, conceded.

One strong point in Trump’s favor, industry officials say, is that even the Obama administration argued that the Army had been on sound legal footing when it initially conducted a streamlined environmental review instead of the full study it’s now planning. “The last administration itself admitted it comported with the law,” Stoody says.

Assistant Secretary of the Army Jo-Ellen Darcy made this point when announcing the decision to stall the pipeline to conduct an environmental impact statement and further consult with the tribe. “I want to be clear that this decision does not alter the Army’s decision that the Corps’ prior reviews and actions comported with legal requirements,” Darcy wrote in a memorandum Dec. 4. “Rather, my decision acknowledges and addresses that a more robust analysis of alternatives can and should be done under these circumstances, before an easement is granted for the Dakota Access Pipeline to cross the Missouri River on Corps land.”

If, as expected, the Corps approves the easement, the tribe intends to challenge it in court. Hasselman underscored that Trump’s memorandum doesn’t mention the tribe, its treaty rights, or its concerns about water quality. “This is another action in a long history of sidestepping treaty rights and trampling on the rights of indigenous people,” he said. “If this is how the Trump administration is going to be approaching issues in Indian country, it’s going to be a long four years.”

Dave Archambault II, chair of the Standing Rock Sioux Tribe, told reporters that he had repeatedly tried to speak with the Trump administration but was rebuffed.

The tribe got the attention of the Obama administration last year after thousands of protesters gathered in and near the reservation to protest the pipeline plans. Now, the tribe has asked demonstrators to leave by Feb. 18, because of concerns for their health and welfare. “We’re asking that the camp be cleared. We’re asking that people don’t come,” Archambault said during a conference call Wednesday with reporters. “The fight is now in D.C.”

Archambault called on the public to stand up and for civil servants to resist the Trump administration, warning that many more attacks on the environment and people’s rights are on the way. “Now we have to go and make noise where we can be heard.”