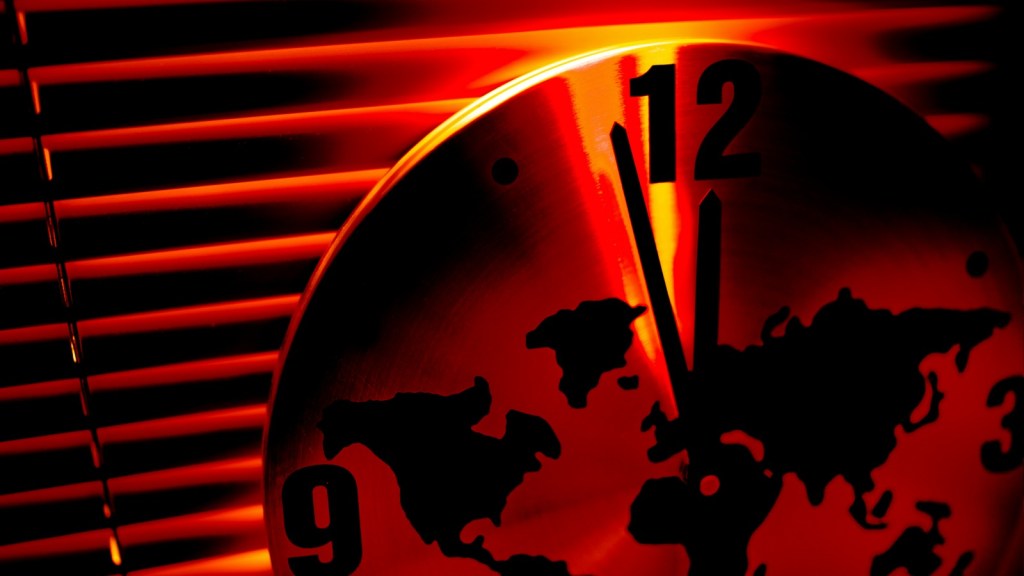 It’s been 64 years since the world has been this close to doomsday.

The Bulletin of the Atomic Scientists has been updating the doomsday clock regularly for 70 years. On Thursday, they turned the hands to two-and-a-half minutes to midnight.

In the early days, the threat of nuclear war was the primary gear turning the clock’s arms. Climate change became a cog in 2007, moving the clock closer to midnight that year. Scientists invoked it in 2015 again, pushing the clock closer still to midnight. And in 2017, another cog was added: a rising tide of political leaders around the world making statements unhinged from facts.

“Facts are stubborn things and they must be taken into account if the future of humanity is preserved,” said Lawrence Krauss, one of the clockmakers and a professor at Arizona State University.

When it comes to climate change, the facts are clear. The world had its hottest year ever recorded in 2016, the third year in a row that mark has been set. Arctic sea ice has been decimated by repeated heatwaves, seas continue to rise, and researchers have warned of instability driven by climate shocks.

The cause is humans pouring carbon pollution into the atmosphere.

Yet, despite knowing all of that, scientists have stressed that the world is not doing enough to put humanity on course to avoid catastrophic climate change. David Titley, a professor at Penn State and one of the authors of the new doomsday clock report, said that while the Paris Agreement represents a positive step, the climate talks in Morocco late last year didn’t move the ball forward enough.

While these actions weighed on the decision to move the clock’s hands closer to midnight, scientists also considered another disturbing trend of world leaders espousing policies and making statements not tied to evidence.

There’s no more stark example than the rise of Donald Trump in the U.S. He has espoused climate science denialism, as have many of his cabinet nominees and advisors. He’s also made false statements on dozens of topics, from voter fraud to the size of his inauguration crowd. Taken individually, they indicate a penchant for embellishment. Taken together, they represent a willful disregard for reality, one that could have wide-ranging consequences on policy here and abroad.

This is hugely problematic when it comes to climate change, where the U.S. stands as an outlier with the only head of state to deny the science behind it. This is the exact moment when the world needs to be doing more to address climate change. Yet, the current administration of the world’s largest historical emitter is poised to ignore this fact, putting the future of humanity at risk.

“Nuclear weapons and climate change are precisely the sort of complex existential threats that cannot be properly managed without access to and reliance on expert knowledge,” the scientists wrote in their report.

All these factors have edged the doomsday clock 30 seconds closer to midnight. It’s the first half-minute move in the clock’s history.

Scientists said they only moved it forward 30 seconds because Donald Trump has held office a few days. There’s still a slight hope his actions could be different from his words. If they’re not, the hands of the clock may move even closer to midnight.