Holidays, happiness, and the post-consumerist gospel of KonMari 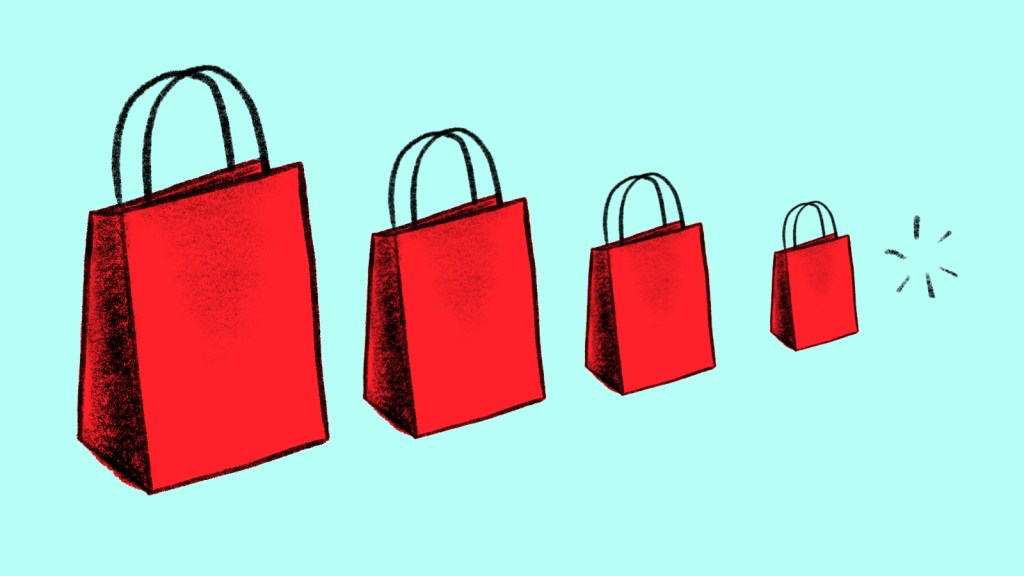 Holidays, happiness, and the post-consumerist gospel of KonMari

For two weeks, an empty Zappos box with two shopping bags from Nordstrom and Sur La Table tucked into it has presided over my living room. It’s just sitting there in the center of the floor, a testimony to a few guilt-ridden holiday deal purchases, for three reasons: One, I can’t figure out if the Nordstrom bag is recyclable; and two, I’ve been reading The Life-Changing Magic of Tidying Up, the organizational bible by Marie Kondo; and three, I’m a masochist.

If you agree that anthropogenic climate change is happening, you have to come to terms with the fact that every object you buy contributes to it in some way. There’s a parallel in Kondo’s KonMari Method: That you have to come to terms with the ways in which all of the objects you have acquired impact the health of your home and your mind. It’s a microlevel environmental awareness: Purge your habitat of contamination, and you can flourish within it. Disrespect the habitat, and you’ll suffer. As Kondo writes: “The question of what you want to own is actually the question of how you want to live your life.”

You can read a million breathless accounts of how the KonMari method has changed lives by getting rid of things, to the extent that it’s used as a verb. (I KonMari, you KonMari, we all KonMari!) But how can the practice change how you buy new things? In this season of buying — increasingly more for ourselves than for others — I wanted to know.

It’s easy to see how this could backfire: Get rid of all your tragic, overused stuff, and you might easily be tempted to replace it with nicer, sleeker stuff. Stuff that does more, looks better. None of your things spark joy? Buy some things that will. Fewer things, of course; better things, certainly; but necessarily, more things.

So, to answer the question of whether KonMari truly changes how you procure more stuff, I delved into the ranks of its disciples. In 2016, KonMari Media Inc. — the corporation of the Kondo empire — began certifying consultants to come to your house and guide you through the Method for several hundred dollars. That network now includes 63 certified consultants who have passed specialized seminars, directed by Kondo herself, ringing in at about $2,000 a pop plus travel and lodging. The KonMari ambassadors, once knighted, can climb the ranks from “green” to “master” based on how many consultations they’ve done.

Let me note here that every single certified KonMari consultant is a woman — mostly white, but all female. Is it because we tend to rely on women to provide order in the home? Reader, I don’t know. I do know that I have never been pointed to the gospel of Ms. Kondo by a man. I also know that I, a woman, have cleaned and swept and neatened the messes of about 4,743 men — not even counting metaphorical messes!

But it’s that exhaustive cleansing process — being forced to deal with all your objects — that has the potential to usher in a kind of anti-consumerism.

“KonMari tries to come to terms with why we shop and bring things into our homes, which has created more of a problem than it’s solving,” says Karin Socci, the only gold-certified KonMari consultant in the U.S. and a former clinical psychotherapist in New York City. This is a rather revelatory framing, because shopping, as a practice, is lightly mentioned in the 200-odd pages of Life-Changing Magic.

Socci says that about half of her clients have read the book, and the other half know nothing about it. “And when [the latter half] tell me they feel anxious, it almost feels more valid, because that feeling hasn’t been planted in their mind by the book.” What they describe is a sensation of waking up and feeling overwhelmed with their environment. And many of these clients do a lot of recreational shopping — they bring things home with neither space nor need for them, creating heaps of clutter and guilt.

Those clinically addicted to recreational shopping are in it for the adrenaline rush — the thrill of acquiring something new and pretty enough to maybe, just maybe, change their lives in some tiny, tangible way. Even the non-addicts among us can probably relate.

“I changed my behavior almost immediately after working through just the clothing KonMari category,” explains Kristyn Ivey, a KonMari consultant in Chicago. The KonMari method works in this order: First, you address clothing; then books (Kondo says that if you haven’t read a book in your house, you never will); then papers; then “miscellany”; then sentimental mementos. The criterion for owning something, Kondo writes, “is whether it gives you a thrill of pleasure when you touch it.”

Through KonMari-ing her own belongings, Ivey realized that she was using mindless shopping as a balm for career malaise, and had accumulated an astonishing amount of unwanted purchases. “When I confronted those items, I set a higher bar for what I now bring through the threshold of my home,” she says. “I’m constantly thinking about it.” Everything now passes through the ‘does it spark joy’ filter. And she’s seen the same transformation occur in her clients.

“I don’t tell them, ‘never buy anything again.’ That’s not the point of KonMari. But we just can’t do it in a compulsive way.”

When Leah Jones, a VP at a Chicago public relations firm, hired Ivey to help her KonMari in December 2016, she refused to get rid of her books. Deeply anxious about the election of Donald Trump, she began to fear oncoming censorship and backlash against press and literature. It simply felt irresponsible to be getting rid of much-beloved books, important Jewish texts, and copies of speeches by Malcolm X and Barack Obama. In fact, she began to think about the value her possessions could serve in a more challenging time.

“So, I did not get rid of any books. In fact, I bought more.” Jones also stopped buying things designed for obsolescence, like finicky kitchen utensils or cheap clothes.

“I think ‘joy’ doesn’t have to mean a frivolous, split-second feeling. It can be deeply rooted in your values. And maybe Marie Kondo might say I’m making a loophole, but I don’t care because she doesn’t live with me,” Jones said. “I like having a big library when friends come over for Shabbat or New Years, that the kids leave with books, and my friends borrow books. I like having a physical library in my house! If people want to borrow and learn something, then they can.”

When you can weigh what objects will serve a purpose or be truly enjoyed, the way you give things to others changes. If you know how much anxiety a hideous frog lamp caused you for years, why would you give one to a friend?

“A lot of people change the way they gift after they go through this because they don’t want to burden someone else,” says Caitlin Roberts, a Los Angeles-based KonMari consultant. You figure out what would actually make the recipient happy — which, more often than not, ends up being an experience, like a concert or a cooking class or something, instead of a novelty fondue set. That shift in how we treat an exchange of objects — actually thinking about what the object means rather than checking an “I remembered to give you a present, OK” box — is a “natural part of this process.”

“Almost every single client will tell me at some point in the process that they’re just not buying things anymore,” says Socci, the New York-based consultant. “They’re not keeping themselves from going into stores, but they just don’t do it. They just aren’t as interested as they were in buying things.”

Does it spark any joy in me to tell you that an organizational philosophy turned small corporate empire is doing a pretty good job at getting people to eschew the fleeting thrills of rampant consumerism? Not really, no. But that doesn’t mean we should discard it.

My best advice for you in these last desperate weeks of a very dark year — when, again, you are probably just pity-shopping for yourself anyway — is to purge a bunch of your things. Use the KonMari method — or don’t! Whatever it takes to figure out which of your possessions really means something to you and why.

That’s it. That’s your entire holiday assignment. You’re absolved of gift-shopping. If family members or boyfriends ask why they received nothing from you, tell them: “Well, I’m doing my part for climate change. And also, I may have joined a Japanese cleaning cult.”

(The Nordstrom bag is not recyclable.)