Walking into “Nature’s Nation,” an art exhibit at the Princeton University Art Museum that explored climate change through history, I got goosebumps. The collection is made up of more than 100 works of art in a variety of media, including contemporary pieces like Hegarty’s “Fallen Bierstadt” — which I had seen before, but only in photographs.

Looking at Hegarty’s tattered canvas, on which an image of Yosemite’s famous Bridalveil Fall had been painted and then destroyed, its decay clearly stood out compared to its nearby namesake — Bierstadt’s 1871 painting of the same setting. Seeing them side-by-side, the two works spoke volumes about Americans’ evolving attitude toward nature over the past couple of centuries. 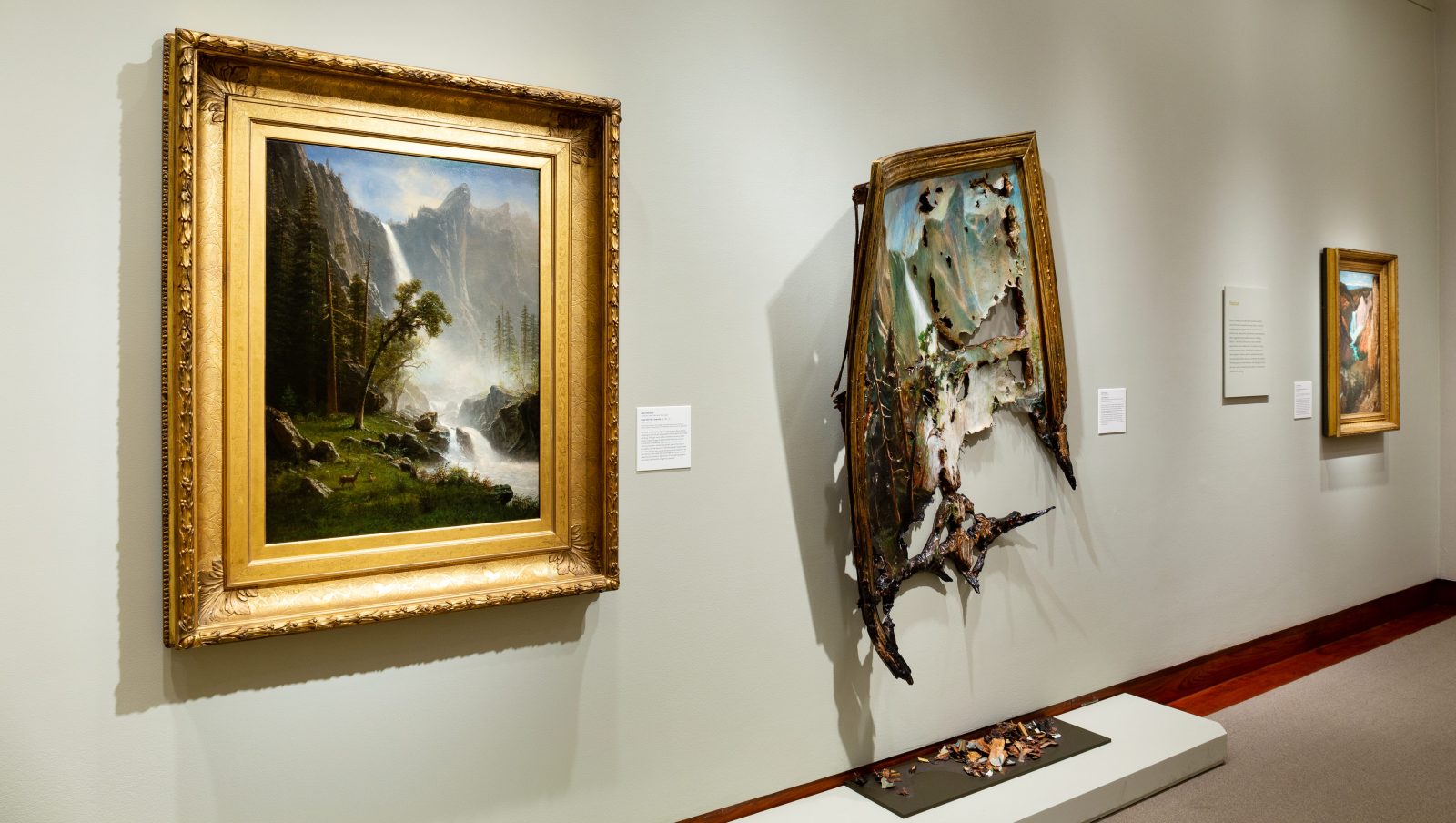 “Nature’s Nation” was eight years in the making, according to Karl Kusserow, curator of American art at Princeton’s museum and one of the main creative forces behind the traveling exhibit, which is now on display at the Peabody Essex Museum in Salem, Massachusetts. It features works from 70 lenders — which, for someone in the museum world, amounts to “Oh my god, that’s insane,” Kusserow said.

But by successfully bringing these works of art together, “Nature’s Nation” collectively tells the story of our coming to grips with the existential threat of climate change, the loss of natural resources, and the troubled national history that got us here.

Mohawk artist Alan Michelson’s contribution to the exhibit — “Home in the Wilderness,” a log cabin statuette, composed of rolled-up pieces of parchment that spell out the Treaty of Fort Wayne — highlights one part of that history: colonization. He sees the “unsettling settlement of the country” as one of the root causes of our current climate predicament. The cabin is displayed beside the painting that inspired it: Thomas Cole’s 1847 “Home in the Woods.” 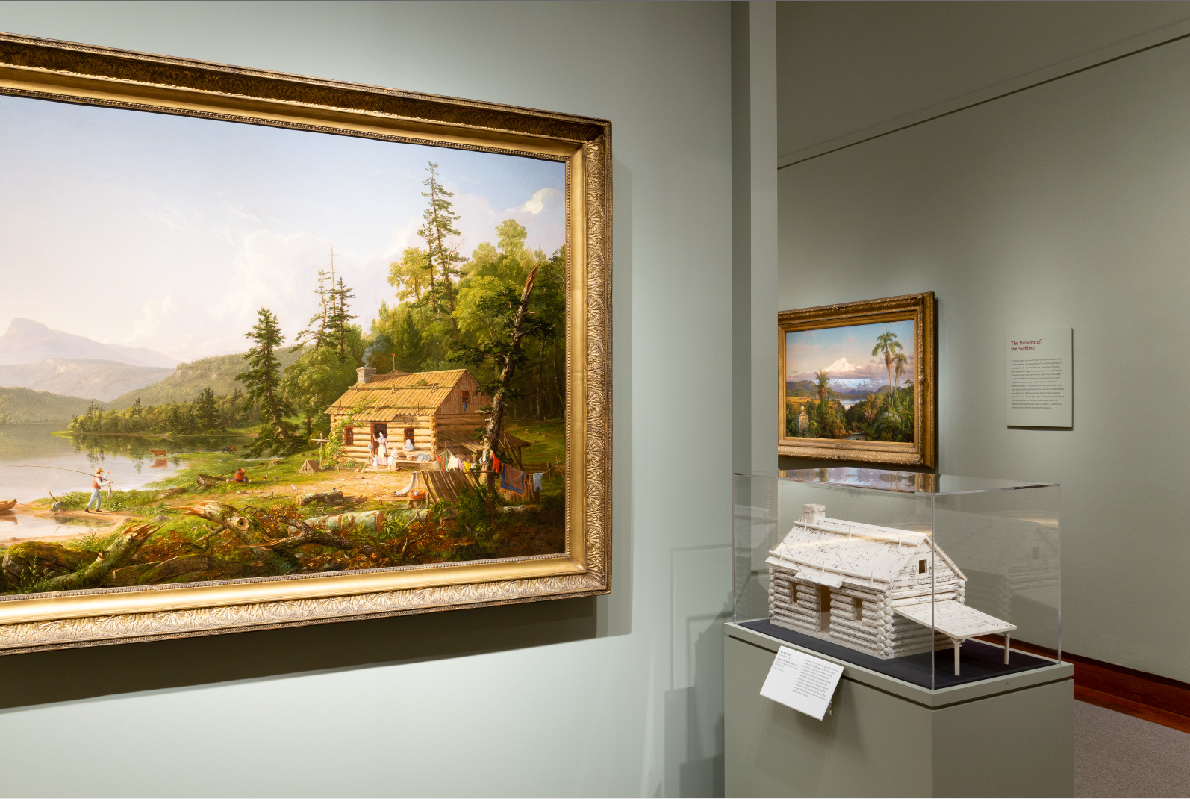 Cole’s work depicts white settlers taking up residence in an expansive, inviting wilderness. Cole was a renowned landscape painter and conservationist. Like other famous landscapers of the time, his paintings tended to show the land as idyllic and untouched. Native people, if acknowledged at all, were depicted simply as part of the scenery. Paired with Michelson’s cabin, Cole’s work takes on a new meaning. The roots of climate change include “attitudes not only towards nature, but towards people who were not considered fully human, who were massively dispossessed and displaced,” Michelson said.

One piece featured in the exhibit had a strong connection to Standing Rock. Two “mirror shields” by artist Cannupa Hanska Luger were on display at “Nature’s Nation.” Fashioned out of plyboard and covered in reflective mylar, the shields actually served as protective gear for the water protectors at Standing Rock. When protesters held up the shiny boards, the police could see themselves in the reflection.

Born and raised on the Standing Rock Reservation in North Dakota, Luger is of Mandan, Hidatsa, Arikara, Lakota, Austrian, and Norwegian descent. “My relationship to the land has less to do with an artistic process and more to do with my upbringing, my heritage,” he said. He hopes the exhibit will spark further conversations around land issues, justice, and history.

“The level of indigenous voice in [‘Nature’s Nation’] is huge,” Luger said. He was happy to be included. Still, he has concerns about the phenomenon of casting Native Americans as mystical land protectors — and assigning them the burden of repairing damage to the land.

Michelson shares these concerns. “I’m also leery of Native people, indigenous people now being ‘noble savaged’ into icons of environmentalism,” he echoed. Think of the “Crying Indian” PSA from 1971. Giving space to marginalized voices can help to break down these caricatures of identity, while also shining light on other important issues. “What I think indigenous contemporary art does actually pretty well is to offer examples of critiques that are connecting all these things that need to be connected and looked at holistically,” Michelson said.

The exhibit was on display at Princeton from October to January. During its display at the Ivy League university, most visitors already seemed to be on board with climate action, said Kusserow, the curator.

“In a way, we’re kind of preaching to the choir around here at Princeton,” Kusserow said. “I think most people came to the show with some knowledge of what we were trying to do, what climate change is, what the Anthropocene is.”

But that audience may soon change. In May, after leaving Salem, Massachusetts, where it is currently on display, the exhibit will head to its final destination: Crystal Bridges Museum of American Art in Bentonville, Arkansas. Unlike the two Northeastern locations, Bentonville is in a fairly red county. The museum, founded by Walmart heiress Alice Walton, attracts a large number of visitors — over 600,000 per year. More viewers are expected to see the exhibit there than anywhere else.

“Art carries ideology,” Michelson said. “And so it can shape public opinion.” He says he believes that environmental art could be the right medium to persuade those less familiar with the science of global warming. It strikes a balance — powerful enough to inspire change, and subtle enough not to dissuade nonbelievers.

“It’s not like somebody standing on a soapbox and arraigning you, or trying to stuff a handout in your hand,” Michelson said. “It just sits there. And you can look at it or not look at it, you can be bored by it and pass it by, or you can just sit there and take it in.”

How U.S. recycling is changing now that China won’t take it