Jimenez was recently approached by a representative from No on 1631, a campaign backed by oil companies trying to quash the country’s first fee on carbon emissions. But he said didn’t know anything about the measure when he signed a form allowing his business to appear on marketing materials for the “No” campaign. He thought the paper the representative handed him had something to do Initiative 1634 — an effort to block future soda taxes in Washington.

Over the weekend, a flyer urging voters to join “more than a hundred Latino businesses and vote No on 1631” went out to Spanish-speaking communities across Washington state. Mi Ranchito and other Latino businesses were listed as opponents of the carbon fee. 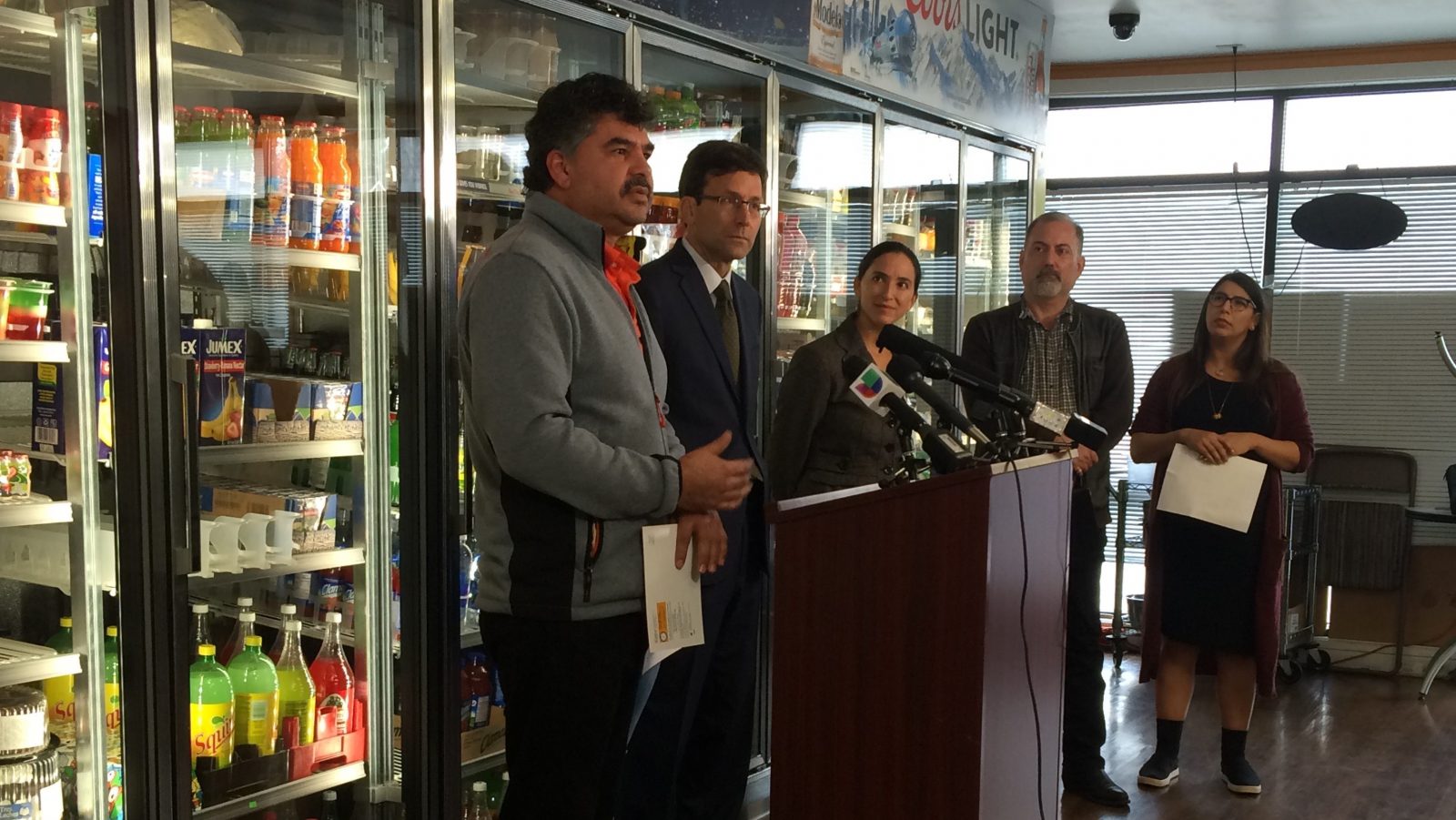 “I didn’t know until yesterday that my [business’] name was all over the place,” said Jimenez, who actually supports Initiative 1631, at a press conference on Tuesday. Earlier that day, a representative from the No campaign reportedly called him and told him not to hold the news conference and “not to believe anything he was being told,” according to the Seattle Times.

“In my time as attorney general, I do not recall a situation that comes close to this,” Washington Attorney General Bob Ferguson told me at the press conference. He’s calling on the state’s Public Disclosure Commission to investigate if any campaign rules were violated.

Owners of at least a dozen businesses say they had no idea they were on the list.

Oliver Mogollan, owner of a tire shop in Bothell, Washington, posted his reaction online.“What is this?” he says of the flyer in a Facebook video. “I don’t even know. I never agreed to anything of this.”

“I’ve never in my life in Washington seen a targeted mailer like this that has exploited our community,” said Peter Bloch Garcia, executive director of the Latino Community Fund, at the press conference. “Partly because most campaigns don’t target our community, but even so.” 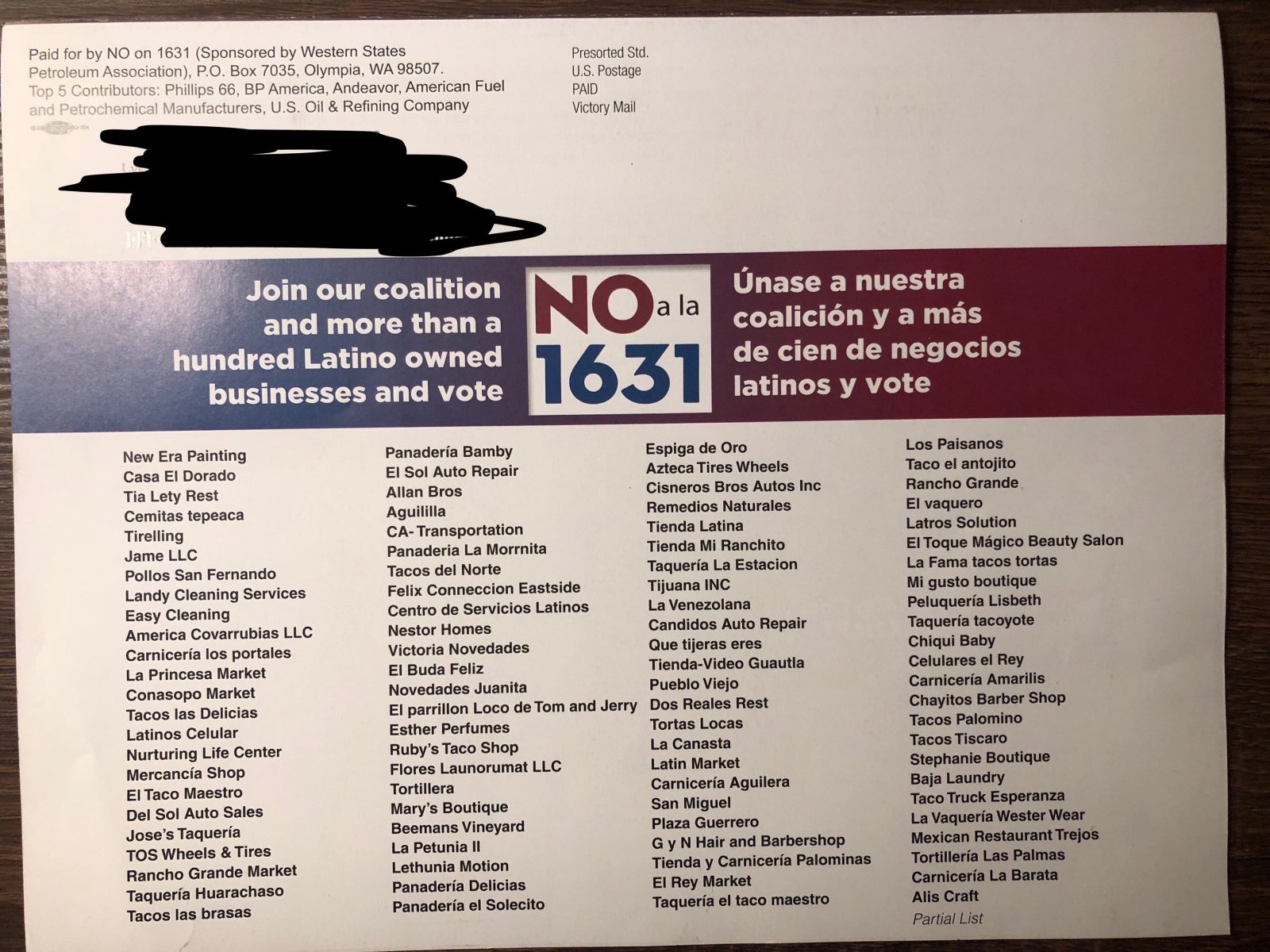 A flyer listing Latino-owned businesses sent out by the No on 1631 campaign. Yes on 1631

The No campaign responded that everything is above board. “Mr. Jimenez — like each and every business listed on our flyer — signed a form joining our coalition,” spokesperson Dana Bieber said in a statement to the Seattle Times. “We are appalled the Yes campaign has chosen to harass and vilify businesses and individuals who have spoken out against I-1631.”

The practice of fabricating grassroots support for a cause — called “astroturfing” — has been around for a while. The fossil fuel industry has been guilty of it before. In fact, a similar instance was uncovered just last week in Oregon.

Eva Liu, owner of Kings Omelets in Portland, had penned a statement that she thought was opposing grocery and beverage taxes: “If you make it more expensive for people to live here, they’re going to have less money to enjoy our food scene.”

To her surprise, that statement appeared in the Multnomah County Voter’s Pamphlet as an argument against the Portland Clean Energy Initiative. The opposition’s political action committee, Keep Portland Affordable, has raised over $1 million to try and block the measure, with donations from Amazon, Walmart, and other companies, according to the Oregon Secretary of State website. The PAC argues that consumers, rather than businesses, will end up paying the tax.

Liu actually supports the clean energy initiative, which would put a 1 percent tax on big retailers’ sales to raise $30 million a year for clean energy. Proponents say the opposition misled Liu and at least one other Asian-American business owner into endorsements.

“The forms that they signed, they did not fully understand,” said Khanh Pham, immigrant organizer with the Asian Pacific American Network of Oregon, an organization on the Portland Clean Energy Initiative steering committee. “Immigrants speaking English as a second language are particularly vulnerable to being misled by language that can trick even native English speakers.”

“It was made very clear what the measure is and what support was being requested,” Keep Portland Affordable PAC told Oregon Public Broadcasting. “If Ms. Liu, or other supporters, change their positions on the measure, we will of course abide by any of their requests.”

The tactics used in the Washington and Portland anti-clean energy campaigns echo other campaigns backed by the fossil-fuel industry that attempted to create a mirage of public support.

Back in 2009, Congress was considering the Waxman-Markey bill, which would have established a national cap-and-trade program. A lobbying group for the American Coalition for Clean Coal Electricity forged letters opposing the bill and sent them to members of Congress. One fake letter was supposedly signed by a representative of Creciendo Juntos, a nonprofit that works with the Latino community in Charlottesville; another by a local NAACP chapter.

This practice of astroturfing might happen more often that we think. “I would assume the best of it we never see,” said Kert Davies, director of the Climate Investigations Center, in an interview with Grist earlier this year. “That’s what it’s intended to be: invisible.”