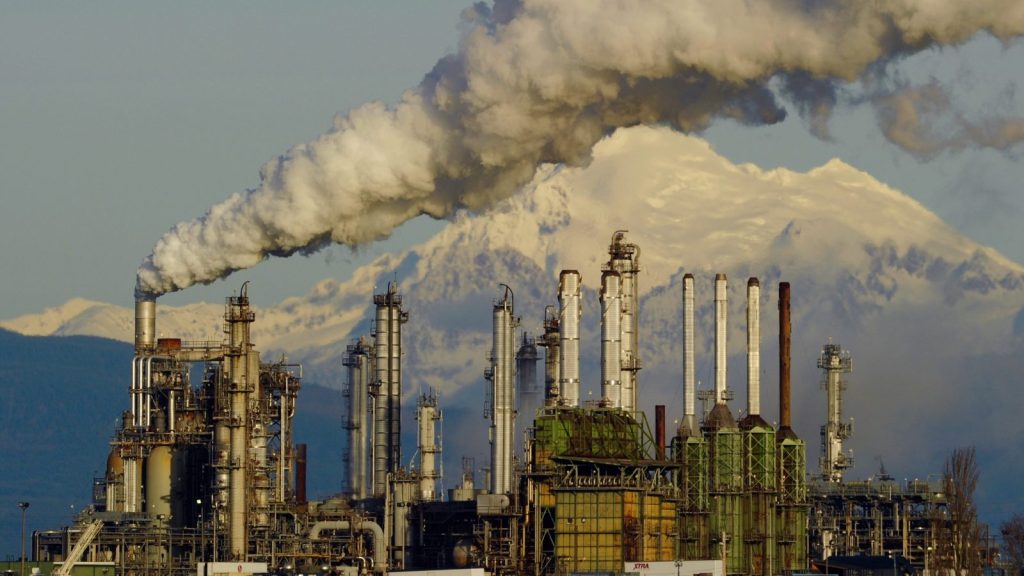 Voters could pass the country’s first fee on carbon next week, and Big Oil is going all out to stop it.

Oil companies have spent a record-breaking amount to stop Initiative 1631, which would put a $15-a-ton fee on carbon in Washington state. The No campaign has raised a total of $31 million, mainly from donors tied to the fossil-fuel industry, setting a new Washington state record for a ballot initiative. BP America, Phillips 66, and Andeavor (formerly Tesoro) are the top backers.

Supporters of the fee have raised less than half of that — around $14 million — with big donations from Bill Gates and Michael Bloomberg.

For perspective, the two sides have drummed up 13 times more money than was raised for a carbon-tax initiative Washingtonians shot down two years ago. Back then, climate hawks were divided on the measure (a long story, trust me). Now things look different: Pretty much the state’s entire environmental movement is behind I-1631. That’s partly because it’s co-written by groups representing the environment, communities of color, labor, tribes, and public health — a result of years of collaboration between groups that haven’t traditionally worked together.

The fee would start at $15 and rise $2 each year until Washington meets its climate goals. The money would go toward investing in clean energy; protecting the air and water; and helping vulnerable communities prepare for wildfires and sea-level rise. An early October poll that sampled 400 state residents found that 50 percent supported the carbon fee, while 36 percent opposed it and 14 percent were undecided.

That was before the No on 1631 campaign ramped up its advertising campaign in an attempt to reach every Washingtonian who owns a TV, Facebook account, or mailbox, spreading doubt about how the carbon fee will affect families and how its revenue will be spent.

“Our best message against them is who’s on what side,” says Nick Abraham, spokesperson for Yes on 1631. With Big Oil on one side and the American Lung Association on the other, many ads from the Yes campaign simply pose the question: “Who do you trust?”

On the No side

Oil and gas companies! They represent 99 percent of the donations to the No on 1631 campaign. If the carbon fee succeeds, by 2030, these companies would have to fork over hundreds of millions of dollars a year in carbon fees, the Seattle Times reports.

The Kochs. Our favorite brothers are up to their old tricks again! Not satisfied with bankrolling climate deniers and killing public transit projects, Koch Industries, Inc. has contributed just shy of $1 million to the campaign to thwart the carbon fee.

Some 70 organizations and businesses, including groups like the Washington Farm Bureau, which say the fee would drive up their costs as gas prices rise. Owners of some businesses on the list were surprised to learn they were on it, including Javier Torres Jimenez of Tienda Mi Ranchito, a grocery store in south Seattle. At a press conference on Tuesday, he said he actually supports I-1631.

The Seattle Times editorial board. It characterizes I-1631 as an “expensive and unaccountable” spending measure. “No, ‘big polluters’ won’t bear these costs,” the board writes. “Look at any utility or cable bill to see how taxes and fees are passed to consumers.” The board says we should work for a national carbon tax instead. K, I’ll ask President Trump what he thinks and let ya know!

Former Washington Attorney General Rob McKenna. In a controversial No on 1631 ad, McKenna neglects to mention that his law firm lobbies for Chevron, which has donated $500,000 to the No campaign. A complaint has been filed with the Washington State Bar Association.

A bunch of guys. The list of big donors is top heavy. Friends of No starts with oil companies and ag businesses and quickly goes to Joe in Vancouver, Washington ($500) and Toby in Kirkland ($250).

On the Yes side

Well, it takes a reaaallly long time to scroll through the list of endorsements for I-1631.  We’re talking 17 health organizations; 85 environmental and clean energy advocates; 21 faith groups; 15 tribal nations; 26 groups representing communities of color; seven organizations that advocate for low-income people; and more than 200 businesses, from REI to the local Seattle Aquarium.

The Nature Conservancy and the League of Conservation Voters are the two biggest donors to the Yes campaign, contributing more than $4 million. Its other supporters include Gates, Bloomberg, Bernie Sanders, Washington Governor Jay Inslee, and, well, just click on the list already.

Climate activists from outside the state are getting involved, too. In a pilot program, hundreds of volunteers with the Peoples Climate Movement are calling up Washington state voters in support of the carbon fee.

Inspired by the campaign, groups from around the country are starting to imagine what a comprehensive climate-and-jobs bill would look like in their state. In Colorado, for example, labor union members and environmentalists are coming together to start those conversations. It’s the kind of momentum that’s bound to draw Big Oil’s attention.

“Once one state shows and proves that this is what people want, they won’t have one state on their hands — they’ll have many,” says Abraham of Yes on 1631.