A new ballot initiative in Portland would raise $30 million a year for clean energy through a tax on giant retailers. Sound unusual? It is.

The campaign for the Portland Clean Energy Initiative is led by groups representing communities of color and grassroots environmental organizations. The local branches of the Sierra Club, 350.org, and the NAACP are all involved, too.

“It’s groundbreaking,” says Jenny Lee, advocacy director at the Coalition of Communities of Color, another organization spearheading the measure. “It’s the first environmental or climate initiative, as far as we know, that’s been led by organizations of color in Oregon.”

The campaign officially qualified for the November ballot on Friday after gathering 60,000 signatures from Portland voters (it only needed 34,000.) Lee says the volume of signatures speaks to the public enthusiasm for the measure, which would place a 1 percent charge on mega-retailers on revenue from Portland sales, excluding groceries and medicine.

So who would be paying up? We’re talking Wells Fargo, Apple, Comcast, and Banana Republic — companies that make over $1 billion in revenue a year and over $500,000 in Portland alone.

Between 40 and 60 percent of the money in the fund would be directed toward renewable energy and energy efficiency projects — half of which must be specifically intended to benefit low-income residents and communities of color. The fund devotes 20-25 percent to clean-energy jobs training that prioritizes women, people of color, and people with disabilities; 10-15 percent to greenhouse gas sequestration programs; and 5 percent to a flexible “future innovation” fund.

It’s the latest instance of social justice advocates and grassroots organizers calling for climate action in the Northwest. In Washington state, a wide coalition introduced a “carbon fee” that’s almost certainly headed to the ballot this November. If passed, it would become the first state law that looks anything like a carbon tax.

This recent wave of ballot initiatives followed some legislative letdowns in the region. Right after a carbon-tax proposal fizzled out in the Washington Senate in March, Oregon lawmakers set aside their plans for a cap-and-trade program. “Maybe Blue States Won’t Take Serious Action on Climate Change,” ran a headline in The Atlantic at the time. The article called into question the narrative we keep hearing — you know, the one about progressive cities and states fighting for climate action when the federal government refuses to.

While elected officials are one way to change policy, ballot initiatives are another — and they’re beginning to look like a hallmark of the Northwest’s climate justice movement.

“We knew that we couldn’t count on our legislators, both at the state and city level,” says Khanh Pham, manager of immigrant organizing at the Asian Pacific American Network of Oregon, who served on the steering committee for the Portland Clean Energy Initiative.

Initially, Pham says, her group wanted to take the measure to city council — an easier, more familiar way to pass city legislation. But without strong support from their local elected officials, they decided to try and put something on the ballot instead.

She says the Portland Clean Energy Initiative would be complementary to other climate policies, such as a statewide carbon price. It’s meant to address the hidden carbon emissions in the products we buy.

“When I buy clothing that comes from China or Vietnam, or food from Peru, there’s a lot of carbon emissions that are baked into those supply chains from these global retailers that are unaccounted for,” Pham says. 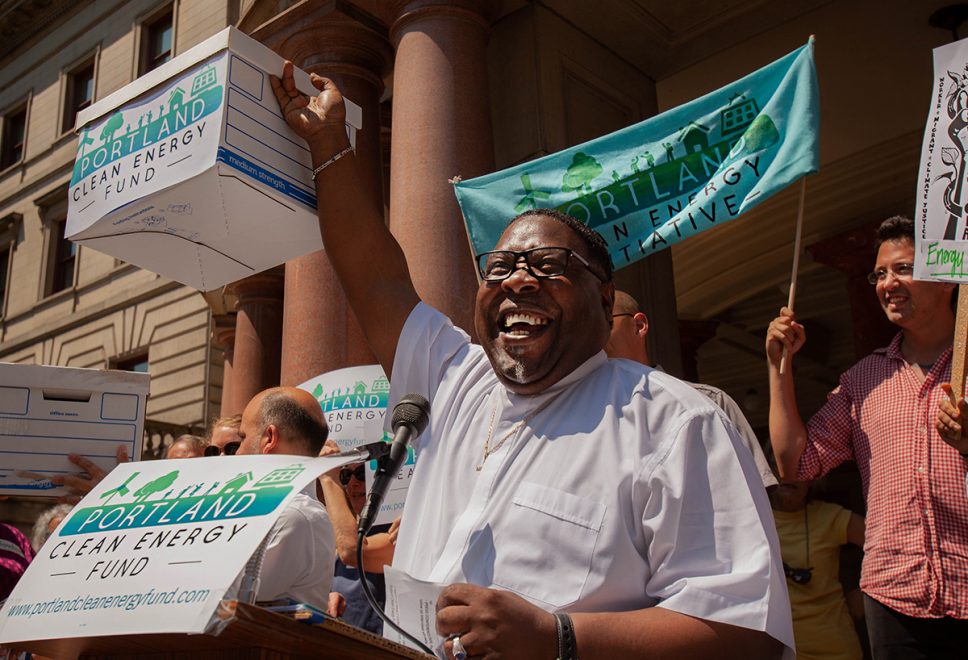 It’s challenging to raise revenue in Oregon, especially to meet the needs of vulnerable communities, says Tony DeFalco, Verde executive director and one of the initiative’s organizers.

In 2016, Oregon voters shot down Measure 97, an attempt to place a 2.5 percent tax on corporations with more than $25 million a year in Oregon sales. DeFalco says the new initiative wasn’t inspired by that attempt. Measure 97 did, however, suggest that Portland has some appetite for a tax on corporations: 60 percent of the city voted for the measure, which would have spent the money on education, health care, and senior services.

Still, the groups behind the measure know they’re up against a challenge. There’s already a PAC, Keep Portland Affordable, that’s fighting the new initiative.

“We knew that we needed to be organizing in communities beyond our own to win this,” Pham says. “It’s been really eye-opening to see the power that a coalition like ours can build — a green-brown coalition.”

Portland is 78 percent white, making it the whitest big city in America. But communities of color have always been in Portland, says Lee, and her group is seeking to make them more visible. This ballot initiative is one such effort, she says:

“It’s a very clear statement that we are here, we are leading on policy, and we are also building political power.”