Climate anxiety doesn't have to ruin your life. Here's how to manage it. 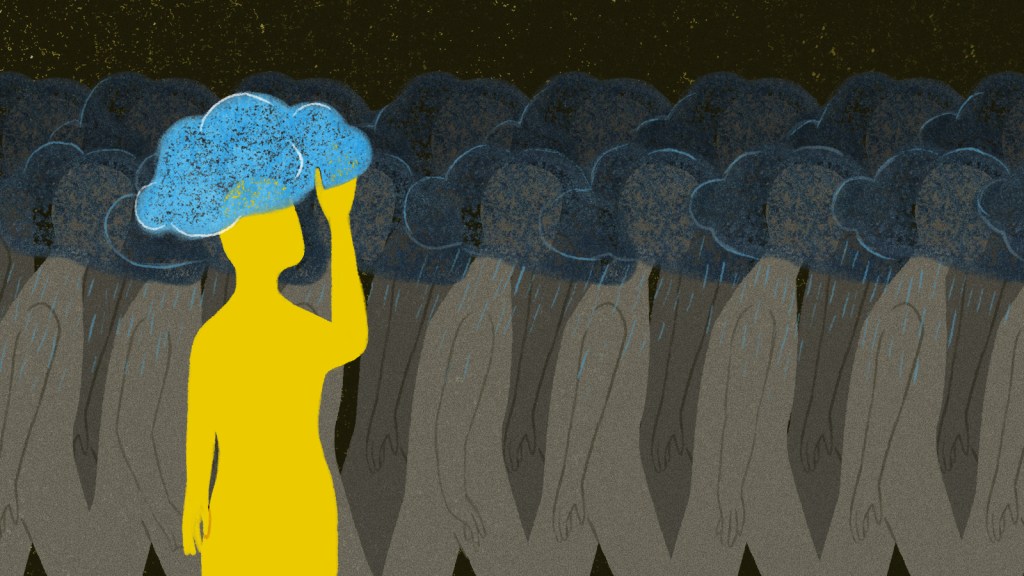 Climate anxiety doesn’t have to ruin your life. Here’s how to manage it.

A reader recently wrote me to say she has given up. She is done.

Our reader is a relentless recycler — beyond that, a recycling evangelist. She removes her coworkers’ recyclables from the trash, an action that has earned her a reputation as the office’s “passive-aggressive bitch.” She’s infuriated by grocery stores’ cavalier attitude toward reusing plastic bags. And she is struggling, she writes, to keep from plunging into a pit of deep despair.

People usually fall into one of two camps upon hearing such a story. You cheer her on for fighting the good fight, or you dismiss her as a humorless try-hard who won’t stop telling you how to live your life. Either way, her conflict is a familiar one: She’s endeavoring to do what she can to forestall seemingly inevitable disaster, all the while seeing no progress.

Climate change is an existential threat. If CO2 levels hit a certain concentration and temperatures increase by a particular number of degrees, the human race is certainly doomed. This summer, in particular, has seen a nonstop slew of ever-worse disasters that permanently changed lives and formerly familiar landscapes: from Hurricane Harvey to western wildfires that fill the sky with ash.

It’s also a unique threat, because you know what you should do to foil it: Don’t drive, don’t fly, don’t eat meat, don’t buy lots of things, don’t vote for (most) Republicans. But in practice, it’s hard to do many of those things. At best, they are mildly inconvenient; at worst, they obstruct your daily life and long-term goals.

And climate change — while slow-moving — has already begun to alter the places in which we live in ways that cannot be reversed. That, to the average person, is a viscerally depressing sentiment.

So I’ll give you a moment. But only one!

The sad truth is, you can’t control the actions of your peers, coworkers, and fellow citizens, so you need to figure out how to keep yourself from losing all hope. So I did what so many Americans have reluctantly dragged themselves to do, and talked to a therapist. (A few of them, actually.) Here’s what I gleaned: Confront the end of your own life, and then figure out one thing you can do to channel your anxiety effectively.

The anxious brain is a bit of a hellhole, so let me attempt to describe it for the blessedly unfamiliar. There’s some nebulous peril looming — you don’t know what it is, but you know you’re supposed to be doing things to avert it, and you’re not doing any of them. So you sit and you fret. And the weight of your inaction gets heavier and heavier.

Anxiety seems like a very popular thing to have right now. Many of us feel out of control, and we like to yell about it on the internet, as Julie Beck recently pointed out in The Atlantic: “I am scared! I don’t know what’s going to happen! I can’t sleep!” (The yelling, as Beck noted, does nothing to assuage your anxiety — but does a good job of spreading it to your audience.)

A portion of environmental psychologist Renee Lertzman’s work is devoted to what she calls “environmental melancholia,” our unconscious sadness over ecological loss and degradation. And in the great American WASP tradition, we have no earthly idea how to talk about those feelings. So we don’t!

Lertzman starts with the premise that a single person can’t stop an environmental crisis. One person can only do so much, and many people are doing too much to drown out any individual action. That imbalance, Lertzman says, can lead to a kind of depression — a “resignation of place,” she calls it. Sufferers might try to avoid those feelings by focusing obsessively on a behavior that they believe can be effective.

Thus, the environmentally woke can fall victim to recycling fanaticism, vegan evangelism, bicycle zealotry. The urge to convert others to the cause grows: If everyone knew the human-race-eliminating consequences of climate change, why wouldn’t they take the actions to prevent them? Soon, you’re bullying the not-yet-converted: “You must do this too, you see — because if you don’t, we’ll all die.”

That’s the worst possible approach, Lertzman says, if you want to have an impact.

No one likes being told what to do. They also don’t typically enjoy pondering their demise. But resistance to confronting climate change is essentially choosing not to think about your own death.

That is the guiding philosophy of Michael Apathy, a psychotherapist in New Zealand who treats environmental anxiety. In some of his younger patients, he says, he’s seeing “a real terror and despair that the picture of our individual and collective future is just so, so dark.”

But feeling terror and despair isn’t the same as truly coming to grips with the fatal implications of climate change. They’re the product of futility brought about by anxiety — the running-in-circles sensation of not being able to do enough to save the world.

“The impulse to do something proactive is very, very healthy, in my mind,” says Apathy, contrary to his surname. “But when that becomes over-relied on as a substitute for facing the fear and deep rage and loss periodically, we get uncreative and disillusioned and backed up against a wall.”

So maybe our initial reader — the so-called “passive-aggressive bitch” — has been vigilante-ing the neighborhood’s recycling bins as a way to avoid reckoning with her own mortality. I mean, who among us?

Margaret Klein Salamon, a psychologist and founder of the Climate Mobilization initiative, is fond of quoting (well, paraphrasing) famed conservationist Aldo Leopold: “Being ecologically conscious is like living in a world of wounds.”

“The truth is: This is really fucking terrible,” says Klein Salamon, who believes that we are about three seconds shy of running out of time to deal with the climate crisis. “And I prefer to live in that.”

Klein Salamon’s organization is pushing for a World War II-era mobilization to drastically reduce emissions. It’s not what she envisioned her life’s calling to be. She’d hoped to be a psychologist, to write, to have a family — her own version of the American dream.

“I was in my Ph.D. program when I realized this whole ‘have a private practice and write books’ thing isn’t going to feel very good on a collapsing planet,” Salamon says.

So she changed course. And while the cause is grandiose, Climate Mobilization’s means to its desired end aren’t particularly Herculean. They are, in sum: “Organize your community and get involved in politics.” Still, with so many people seemingly unwilling to take on even that responsibility, I wondered how Salamon kept from buckling under such a weight.

One of Klein Salamon’s subtler points is that there are a million ways to attack a problem as big as climate change. A single one of them can’t fix the problem, of course, but each chips a piece off the carbon burden. It’s up to you to figure out which one can be your strongest little pickaxe, and how to wield it to have the most impact. (The strongest pickaxe, we can infer from Renee Lertzman’s recommendations, is perhaps not yelling at people about recycling — but rather, finding other, less howl-y ways to get them interested in climate issues.)

Courtney Mattison, for example, creates insanely beautiful sculptures of corals. The idea is that the uninitiated observer might see, say, a ceramic recreation of a brain coral and think: “What a good thing that is — I don’t want it to die!” That’s how she’s chosen to take on climate change.

She was driven to her current vocation after falling in love with coral reefs and then immediately realizing that they were dying — like A Walk to Remember, but replace a cancer-stricken Mandy Moore with zooxanthellae. When it comes to saving ecosystems, she explains, you can’t tell people what to do. Instead, try enticing them.

Consider the difficulty of Mattison’s work for a moment. She spends months building delicate replicas of beloved creatures that are on their aquatic deathbeds, thanks to the actions of billions of blissfully unaware humans.

“I do privately vent and complain and tear my hair out,” Mattison says when I ask how she keeps pushing forward. “But then I get it together and think about what will be productive in terms of inspiring change.”

Mattison has taken on a tall challenge. It is hard to try to coax humans into assessing their impact on non-human creatures. Most of us have never even seen a coral (myself included). But it is somehow even more frustrating, in practice, to watch humans fail to care about the fate of their own future generations.

Roberto Nutlouis has been a community organizer with the Black Mesa Water Coalition for 16 years. That means — among many other characteristics — he tries to build tribal support and enthusiasm for climate mitigation and adaptation projects in the Navajo nation of northwest Arizona. And he frequently has to negotiate between opposing interests within the community.

For example, there’s a lot of debate over the coal, oil, and gas infrastructure on reservations. Older officials in the community rely on the revenue that it can bring to a relatively impoverished community, while Nutlouis and his younger cohort insist that fossil-fuel development will keep the tribe from living sustainably. Both groups want the same outcome — the survival and success of the Navajo nation — but see wildly different ways of achieving it.

How do you keep from being driven to despair when the ones you are disagreeing with are the ones you’re trying, specifically, to protect? How do you deal with resistance to a threat that, to you, is urgent?

His answer surprised me, honestly: He’s patient. The projects he’s developing — a food-sovereignty initiative, a land-grant system — will be entrusted to younger members of the tribe, those who understand climate change and are passionate about fighting it.

“I’ve accepted the fact that some of these ideas may not come into fruition in my lifetime,” he says. “But we’ve got to plant these seeds, and some of them will sprout. They need to be watered and nourished.

All of this is to say, dear reader, when you feel anxious and out of control in the face of a changing planet, choose the thing that you can do best and most effectively, and then don’t let others ruin your faith in it. I chose my thing — climate journalism. It is frequently horrible — thanks to the subject matter — and I feel anxious and powerless and sad regularly.

But when one piece of writing turns out even approximately as well as I wanted it to, it feels like I have taken one small but sure-footed step toward saving humanity. And that makes the next, inevitably faltering ones easier.

You feel what you feel, you do what you can, and you try not to carry the weight of every errant carbon molecule on your shoulders. Everyone else is carrying that weight, too, whether they’ve dealt with it or not — and most are just as lost as you are. You help them figure out their thing that they can do, rather than tell them what they should be doing. You try to be patient.

And doing all of these things, is what will keep you from giving up hope.

Correction: As a reader pointed out, an earlier version of this article misattributed a quote by Aldo Leopold to Joanna Macy. We apologize for the error.