Every time Linda Garcia’s cellphone pings, she wonders if it will be another death threat. The environmental activist has been targeted by anonymous callers for five years since taking on Big Oil to save her community from environmental devastation.

Garcia lives in Fruit Valley, the kind of close-knit place where everybody knows everybody. The low-income community in Vancouver, Washington, sits just across the river from Portland, Oregon, and is home to a thousand households. It also has a severe air pollution problem. In 2013, when Garcia, 51, first heard of a plan to put a massive fossil fuel transportation hub on the edge of her neighborhood, Fruit Valley was suffering the worst air quality in the city. Parents were regularly warned to keep children indoors to protect them from the dark industrial smog that descended across the river. 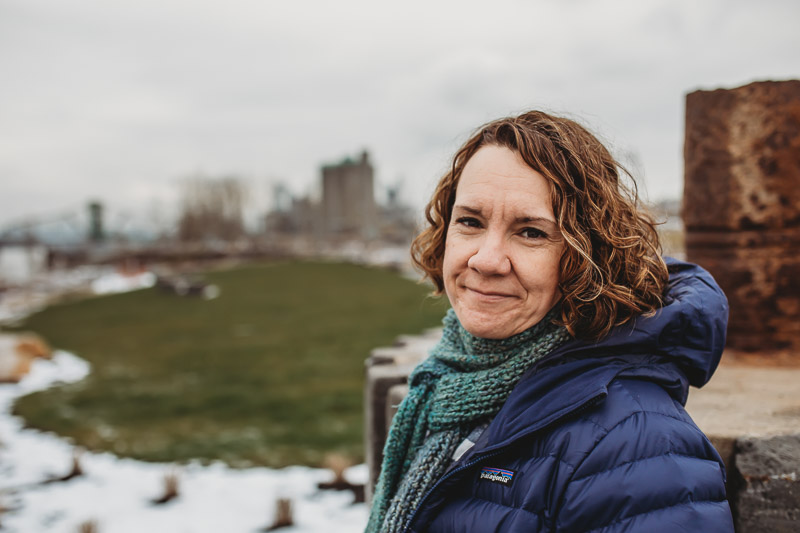 Concerned about how the new development might exacerbate the problems, Garcia, who was secretary of the Fruit Valley Neighborhood Association, started asking questions. She was skeptical of dubious claims being made by executives from Texas-headquartered oil company Tesoro (as it was then called) and elected officials about impressive job creation and minimal environmental risks.

“They made it sound amazing — jobs, jobs, jobs — which in a low-income community like Fruit Valley that was still recovering from the recession sounded great … But most of it turned out to be slick PR,” Garcia told HuffPost.

The deeper Garcia dug, the bleaker it looked: She believed the mega-terminal would have devastating consequences — health, environmental, and social — for the community and across the region.

The project would be North America’s largest oil terminal. The plan was to transport up to 11 million gallons of oil every day halfway across the country on mile-and-a-half-long trains from fracking fields in North Dakota through the Columbia River to the industrial Port of Vancouver, where the proposed terminal would be located less than a mile from most Fruit Valley residents. The oil would then be loaded onto ocean tankers at the terminal and shipped to Asia, where rapidly rising energy demands are enticing U.S. fossil fuel companies.

The oil company’s environmental and safety track record rang alarm bells for Garcia, especially the death of seven workers at one of its refineries in nearby Anacortes in 2010. In 2016, as the community continued its fight, the Department of Justice and Environmental Protection Agency fined Tesoro $10.4 million for air pollution violations relating to six refineries and $720,000 for alleged safety breaches at Anacortes refinery.

The more Garcia chipped away at the project’s marketing veneer, the more worried she got, which motivated her to organize the community to oppose the oil giant and forestall environmental devastation. Over the course of her long campaign against the terminal, she kept up the momentum — despite multiple death threats that continue even today.“I didn’t give up; I’m not backing down. I am doing the right thing, that’s who I am,” she said.

Six years later, the Tesoro-Savage terminal is dead in the water and Garcia is the recipient of one of the world’s most prestigious environmental awards.

It was her steely determination that stood out to the committee, which awards the annual Goldman Environmental Prize to six grassroots environmentalists, one from each inhabited continent, in recognition of their leadership and efforts to protect the natural environment at significant personal cost. (This year’s other winners come from Chile, Liberia, North Macedonia, Cook Islands, and Mongolia.)

“Despite personal risks, political and legal obstacles in her path, and challenges with her own health, Linda demonstrated steady leadership throughout a long campaign — and didn’t stop until the terminal was defeated,” said Goldman prize spokesman Ilan Kayatsky.

Garcia was relentless. Through the neighborhood association, she met with company and council officials and organized public meetings to share information with friends, neighbors, and local businesses about the terminal. 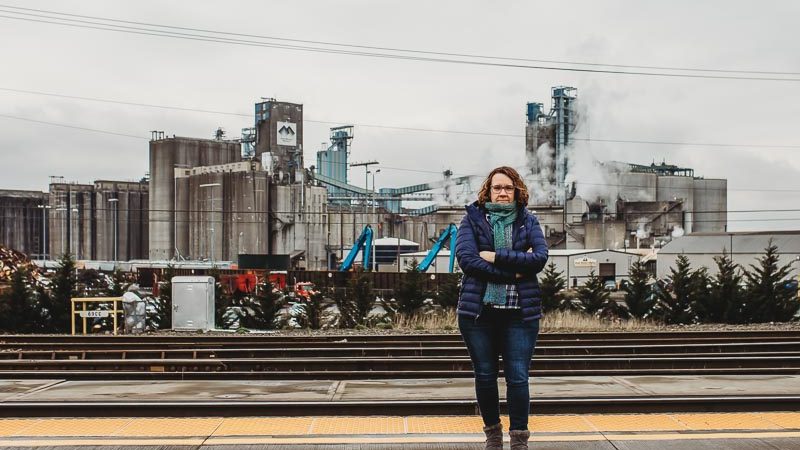 She also works with the Washington Environmental Council — a nonprofit that focuses on sustainability and climate action throughout Washington state — which helped her garner support from outside environmental groups like Columbia Riverkeeper and the Sierra Club. As the community got educated and organized, the company stopped turning up at public meetings.

In response, the community got political, voting out two of the three elected port authority commissioners who had twice voted for the mega-terminal despite widespread public opposition and growing concerns about safety.

Garcia testified as a community witness at public hearings and city council meetings, using general safety reports published by the federal agency PHMSA (Pipeline and Hazardous Materials Safety Administration) and experience from similar projects to argue that the daily procession of rail and river traffic would threaten fish and wildlife species, and cause harmful air and water emissions damaging to human health.

The community was also deeply concerned about the risk of accidents and spills especially following the Lac-Megantic disaster in Quebec in July 2013, when a 14-car oil train derailed and killed 47 people in a fiery explosion. And in June 2016, as the battle heated up, a Union Pacific train carrying 3 million gallons of oil derailed in the Columbia River Gorge National Scenic Area in Oregon — the same area the Tesoro-Savage railway would pass through.

The company accused activists of using “scare tactics,” claiming the trains would be safe and the project would bring jobs and economic growth to the community.

As Garcia gained prominence as a key leader in the community resistance, the death threats started. In addition, she suffered a life-threatening illness during the campaign and would often travel directly from chemotherapy to council meetings to testify on behalf of Fruit Valley residents.

“I was fighting for my own life and the lives of others … I knew that the second the terminal went online we’d be living with 24/7 toxic fumes that would exacerbate or cause conditions people could die from,” she said. “This kept me motivated.”

Garcia and the other campaigners convinced the city council to appeal the project at the state level, and in late 2017, the Washington Energy Facility Site Evaluation Council (the state agency responsible for sanctioning new projects) recommended against the oil terminal on the grounds it posed significant, unavoidable harm to the environment and community. In January 2018, Governor Jay Inslee denied the necessary permits. It was over, Fruit Valley had defeated Big Oil.

Fruit Valley’s triumphant resistance was remarkable, but not isolated.

The Pacific Northwest, a politically progressive region that identifies strongly with the environmental movement, has for almost a decade been under siege by the fossil fuel industry as it eyes the lucrative Asian energy market.

The plan of energy companies was to turn the picturesque Pacific Northwest into a fossil fuel highway for the next 50 years by expanding refineries and building terminals, trains and pipelines to transport millions of tons of coal (from the Powder River Basin in Montana and Wyoming), oil (extracted by fracking in North Dakota), liquefied natural gas (from the Montney Formation in western Canada), and petrochemicals.

In total, 30 or so infrastructure projects were destined for communities in the region, including federally protected Indian tribal territories. If constructed, the combined capacity could be at least five times greater than the massive (and massively maligned) Keystone XL pipeline, according to analysis by Sightline Institute, a sustainability and energy think-tank, bringing huge pollution and climate implications.

But the region’s response was to unite. The coordinated opposition movement, known as the Thin Green Line, has beaten back all but four of the proposed projects (two relatively small expansion projects were sanctioned; two other battles are ongoing).

The unity took work. At first, communities and tribes took on the projects individually, until it became clear that the threat was regional, said Eric de Place, a researcher at Sightline Institute, which coined the term “Thin Green Line” to describe the commonality of the threats. Local and state organizations — including Garcia’s Washington Environmental Council — formed a coalition that spearheaded three campaigns: Power Past Coal, Stand Up to Oil, and Power Past Fracked Gas.

“Regional coordination stopped the industry being able to pit communities against each other, as together our negotiating bottom line was no, not one ton, not one community, just no,” de Place said.

The coalition pooled resources to investigate the economic, environmental and safety risks, which in turn helped persuade diverse sectors including tourism and commerce that it was in their interest to resist the fossil fuel corridor. Together, they turned out thousands of people to every public meeting, in every community, to take on the company executives and local officials.

“It was aggressive activism,” said de Place. “Our hard-line stance made it clear to elected officials that this was a binary issue and taking any money from coal or oil would be a political death sentence. This might not work everywhere, but it worked here.”

It’s noteworthy that the Pacific Northwest’s coordinated resistance has targeted transport and infrastructure projects, not the actual oil fields and coal mines. By disrupting the only economically viable transport options, they have made the intended extraction of millions of tons of coal economically unviable. “Find the weakest point in the supply chain, and go after it, that’s what we showed was possible,” said de Place.

The region’s opposition strategies and successes have served as rallying points for the larger climate movement and “keep it in the ground” campaign (which advocates against further fossil fuel burning), said Hilary Boudet, associate professor of sociology at Oregon State University’s School of Public Policy.

But, she warned, with huge profits at stake, Big Oil isn’t giving up. “A proposal’s defeat in one location doesn’t necessarily mean that fossil fuel export won’t happen somewhere else … The Trump administration has been very vocal about its policy of ‘energy dominance,’ which includes fossil fuel export,” Boudet said. Local and state-level politics are crucial to opposing this, she added.

As Garcia’s personal story shows, things can get ugly. At times, community leaders, especially tribal leaders, have been attacked as anti-development, anti-jobs, even anti-American for trying to protect their corner of the planet. But staying united has been their key to prevailing.

Garcia said: “There’s a tremendous sense of responsibility in our communities to take care of the planet so that it can be passed on to our children, and their children. We need more people to speak out, stand up, and form armies of resistance.”