How the mainstream media got played by Trump 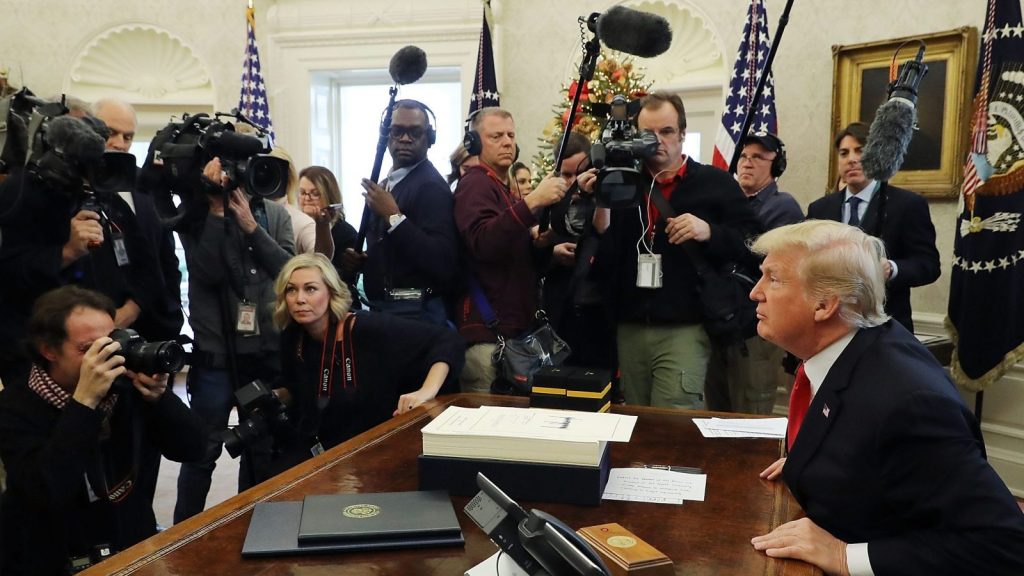 How the mainstream media got played by Trump

The media spent a ton of time in 2017 puzzling over whether President Trump thinks climate change is real. That was a ton of time wasted. His stance has long been clear, thanks to more than a hundred tweets and loads of comments dismissing or denying climate change.

The fact that Trump has called global warming a “hoax” was mentioned in nearly a quarter of all segments about climate change on the nightly news and Sunday morning programs on ABC, CBS, and NBC in 2017 — and in more than a third of those instances, the networks didn’t push back by affirming that human-driven climate change is a reality. Network journalists did numerous interviews asking Trump administration officials for clarity on the president’s stance. And outlets from Time to CNN cited the hoax claim and tried to make sense of Trump’s nonsensical climate views.

This misfire by mainstream media follows on the heels of a different sort of failure in 2016. That year, broadcast networks spent way too little time on climate change overall and completely failed to report during the campaign on what a Trump win would mean for climate change.

Now the networks are covering climate change but squandering too much of that coverage in trying to read Trump’s Fox-addled mind and divine whether he accepts climate science. That’s crowding out reporting on other, more critical climate-related news, from how the Trump administration is aggressively dismantling climate protections to how climate change makes hurricanes and wildfires more dangerous.

It’s bad enough that outlets waste all this time on old news about Trump’s climate views. But what makes it even worse is that they too often get the story wrong.

Consider this example: Last June, Trump’s U.N. ambassador, Nikki Haley, did the rounds on TV news to defend her boss’ decision to pull the U.S. out of the Paris climate agreement. When asked to clarify Trump’s views on climate change, she said more than once that he “believes the climate is changing” and “he believes pollutants are part of that equation.”

Haley was employing Republicans’ favorite obfuscation technique on climate change — what savvy observers call “lukewarm” climate denial. The obfuscators try to sound reasonable by admitting that the climate is changing, but then get all squishy about why it’s changing or how it will play out or what we could possibly do about it. (In fact, there is overwhelming scientific consensus that human activity is the primary cause of climate change, a fact that U.S. government experts again confirmed just three months ago.) You’d think that journalists who’ve been covering national politics would be thoroughly familiar with this gambit by now. Trump nominees made liberal use of it during confirmation hearings last year, and other Republicans have been employing it for longer still.

Anchor Tom Llamas reported that her remarks represented a “dramatic switch” and “major concession” with “the administration saying the president does believe that the climate is changing.” Correspondent Gloria Riviera described Haley’s remarks as “a stunning reversal.”

There was no reversal. There was just a stunning incident of ABC falling for Trump administration spin.

Other networks and outlets have made similar mistakes, failing to properly identify the Trump team’s lukewarm climate denial and put comments in context. Like when The Associated Press declared, “Trump changes his tune on climate change,” though in fact he had done no such thing, as Grist pointed out at the time.

Instead of continuing to fixate on (and misreport) Trump’s personal views about climate change, journalists should offer more reporting on the consequences of having a president who disregards climate science and opposes climate action. Those consequences include: Policies that encourage dirty energy instead of clean energy. Less innovation. Fewer jobs in renewables and energy efficiency. Diminished national security. More destructive storms and dangerous wildfires, and communities that are less prepared to cope with them.

Topics like these got dramatically less coverage last year than they deserved, in large part because so much climate reporting was centered on Trump. A new Media Matters analysis found that when corporate broadcast TV news reported on climate change last year, they spent 79 percent of the time on statements or actions by the Trump administration — and even that included little coverage of efforts to roll back the Clean Power Plan and other climate regulations. Issues like how climate change affects the economy or public health got even less attention. And in a year when hurricanes and other forms of extreme weather hammered the U.S., the networks hardly ever mentioned climate change in their coverage of those disasters.

Instead of trying to analyze Trump’s well-established refusal to accept climate science, media should be telling stories of how climate change is happening here and now, how it’s affecting real people, and how the EPA and other agencies are ripping up climate regulations. When they chase Trump around and let him set the agenda, the hoax is on all of us.