Hurricane Maria evacuees worry about jobs, housing, and if they'll ever go home 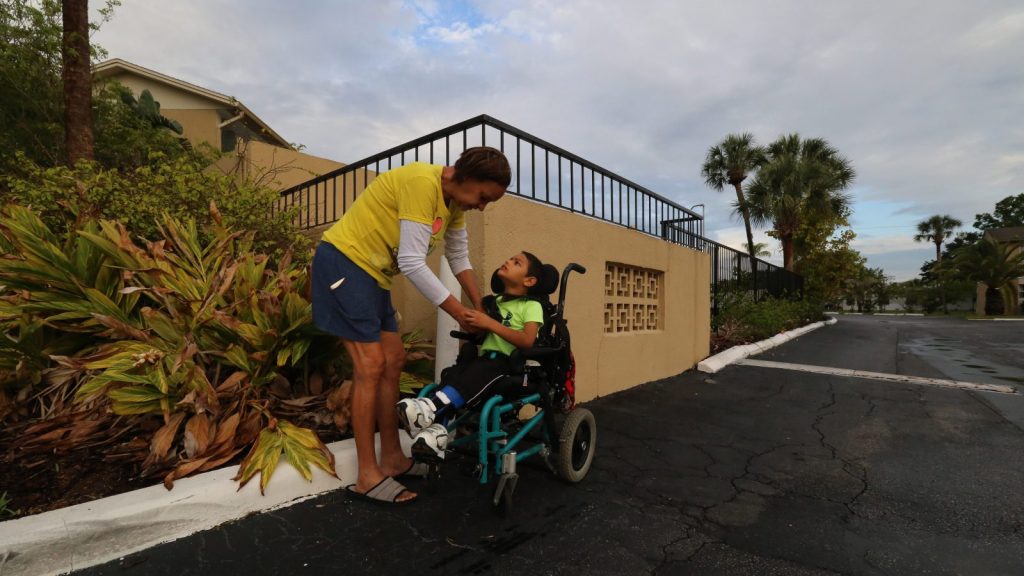 Maria Baez, adjusts the straps of her grandson, Christian Dariel Diaz Garcia, as they wait for the school bus. Ricardo Ramirez Buxeda / Orlando Sentinel / TNS via Getty Images
Out of house and home

Hurricane Maria evacuees worry about jobs, housing, and if they’ll ever go home

In the wake of Hurricane Maria, 1,700 evacuees from Puerto Rico have received housing assistance from the Federal Emergency Management Agency. This past week, those Puerto Ricans faced being displaced again as a deadline approached that would have forced them to move out of hotel rooms, mostly in Florida, that were being paid for by the U.S. government.

Temporary Shelter Assistance (TSA) for those affected by Maria was scheduled to end on June 30. But advocates rallied for an extension, as well as a plan to provide more long-term housing to those who were forced to flee Puerto Rico.

After levying a lawsuit against FEMA, the effort was successful in achieving a brief reprieve. On Tuesday, a federal judge ruled that evacuees could retain occupancy of their hotel rooms until July 23. While it’s a momentary relief, these displaced Puerto Ricans still face several hurdles in setting up a new life post-Maria.

Grist spoke with three TSA recipients who moved to the Orlando area after the hurricane. All of them expressed uncertainty about the futures of them and their families. And the new deadline now looms large as they work to find jobs, more permanent housing, or a way back to their island home. (The sources’ accounts have been edited for clarity and concision.)

Colon was a nursing student when Hurricane Maria hit. She and her boyfriend have a one-year-old son and another baby on the way. They’re staying at a Holiday Inn in Kissimmee, Florida.

I moved in December. My boyfriend came in October to make sure he was going to have a job first before we actually came here. It’s been really hard because I’ve never been to Florida before, so it’s kind of like trying to learn how everything goes here.

When we were in Puerto Rico, the governor of Florida was saying that there would be a lot of assistance. But once we came here it was the opposite. We did get the assistance from the TSA program, but other than that, there was nothing. We had to do everything ourselves, even though we came with just a suitcase with some clothes with it. We didn’t come with money. It was more like we came here by force after everything that happened.

We didn’t lose our home, it was more everything that happened after the hurricane: no electricity, no water, no food. I spent a lot of days trying to find one can of formula for my baby. He was actually getting sick because of the smell of the generators. He got a lung infection.

In Puerto Rico, there was tropical weather. It was so hot inside that he couldn’t sleep, so I would have to sleep outside or sleep on roof so he could. It was more for my son that we decided to come because he was suffering a lot. He was five months old at the time, so he was really small.

At first I couldn’t work because I didn’t have daycare. Daycare is really expensive. So my boyfriend was working by himself, and I wasn’t receiving any benefits from the government, like food stamps or WIC (a food program, specifically aimed at women, infants, and children). I started receiving those later on, after maybe three months. Everything was coming out of our pockets, so we couldn’t save a lot in that time.

Then I was trying to get assistance from the state that helps you pay for daycare. I got it in April, and that’s when I started working in a fast food restaurant and trying to save more. But even with that, I spend like maybe half of what I make on daycare — and that only covers five hours Monday through Friday, so I can’t really have a full-time job.

It’s been really stressful, not knowing if you’re going to have a roof over your head or not, and having a baby makes it 10 times worse. I was freaking out about this — like, “Oh my god, I have to move everything again.” Because we have actually moved; we’ve been in four different hotels.

People say, “You’re staying in a hotel. It must be nice.” But it’s really not, staying in a hotel room for such a long time and having [hotel staff] coming in and out. You never know when someone’s going to open the door. Having everything stuck together in a small room is really uncomfortable. We can’t cook, because there’s no kitchen. You’re not comfortable at all. It is a roof and a bed, but it’s not how people think.

Pregnancy is really hard, and it obviously wasn’t planned so it’s kind of hard having to think about all this stress with the FEMA situation and then dealing with my baby. I feel like I have a lot of pressure on me. But I’m managing to fight through it.

Right now, we do have a plan. My boyfriend has a car in Puerto Rico that he’s trying to get here. With that car, he can do Uber. And we’re going to hope that doing that we can probably make more and get an apartment sooner.

So this [TSA extension] gave us a little more time. Instead of wasting money on a room that we’re going to be forced to rent — because obviously we can’t just stay in the street with my son — we can use that money to bring the car and start making more and see if that works out. I don’t think we have any more options.

Oliveras ran a small construction business in Las Marias, Puerto Rico, before Hurricane Maria destroyed his home. On June 30, the day TSA was originally scheduled to end, he moved out of a Super 8 motel and in with a Florida resident who had offered a room in his house to Victor and his girlfriend. He’s now working as a canvasser for the local nonprofit Organize Florida, where he’s helping to register Puerto Ricans to vote. (He spoke to Grist via a translator.)

Last month and this month, I had anxiety and depression. I went to bed every night without knowing what I can do. When you don’t have your own place, it’s horrible. It’s a nightmare.

I don’t want to stay in the hotel anymore. FEMA extended the program, but at any time you can end up on the street and be homeless. So I didn’t apply for the extension. I would rather stay in the bedroom that I rent because I feel safe. Now I don’t live with anxiety anymore because I have my own bedroom, I feel comfortable.

Here I’m alone. I’m with my girlfriend, but I don’t have family here. In Puerto Rico, I had my own company and built houses. I’m saving money to begin my small business in Puerto Rico again — and so I can stay with my family.

Claudia is a grandmother living with her five-year-old grandson, who has a disability that affects his motor skills, as well as his ability to talk. They are staying together at a Super 8 motel in Kissimmee, Florida. She applied for more permanent housing assistance through the Methodist Church, but is still on a waiting list. (She spoke to Grist via a translator.)

After the hurricane, with my grandson’s condition and few medical resources, I decided that the best thing to do was to come to Florida. Being alone and staying in a hotel with my grandson with a disability can be complicated. It’s a bit tough to go through sometimes. I’m grateful with him being able to go to therapy and go to school. I feel that he has gotten better because of those things. I’m thankful for that.

I’ve been anxious, worried, desperate, not knowing what’s going to happen [with TSA]. Today, I have a little bit of piece of mind, but overall it has been a hard experience. I’m hoping they can give me at least another month [beyond the July 23 deadline], because I have to figure things out.

I hope I have an apartment to live in and a job to sustain us and to be able to give my grandson stability and a good life. What keeps me going is the love that I have for my grandson — every time I look at him I find the strength to keep going.