Hurricane Maria poses a catastrophic threat to the Caribbean 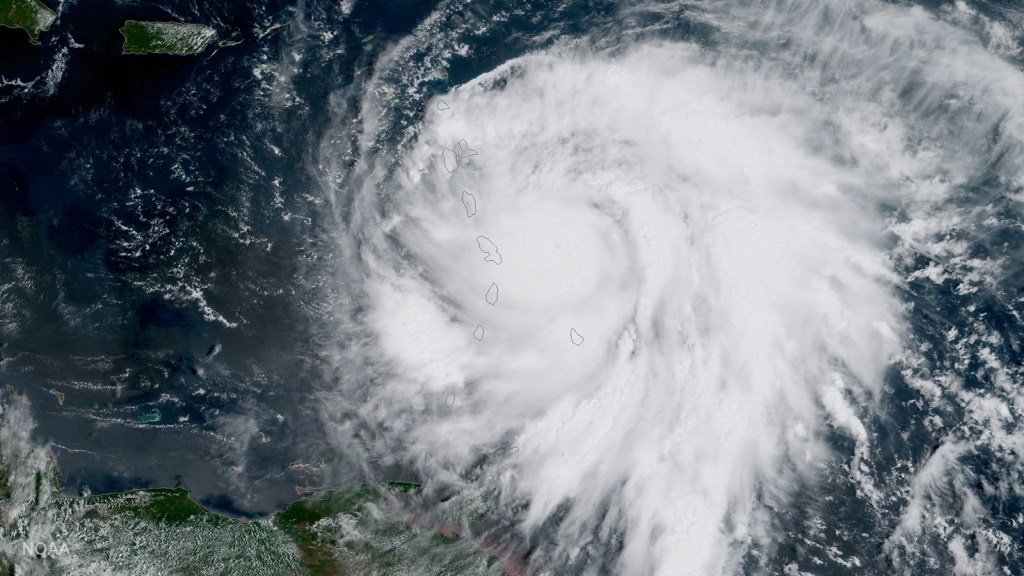 Hurricane Maria poses a catastrophic threat to the Caribbean

This post has been updated to reflect Maria’s upgrade to Category 5.

The already miserable hurricane season is about to get worse, as Hurricane Maria barrels toward a storm-weary Caribbean.

Maria rapidly strengthened to a Category 5 hurricane on Monday, packing winds of at least 160 mph as it neared the eastern Caribbean island country of Dominica — one of the fastest intensifying hurricanes in history. Meteorologists with the National Hurricane Center warned that the storm would likely keep growing stronger as it moves closer to Puerto Rico and the U.S. Virgin Islands, home to more than 3.5 million people. Ocean waters on its path are much warmer than normal, and atmospheric conditions are nearly ideal for a storm to intensify.

The latest forecast takes Maria ashore in Puerto Rico early Wednesday as a Category 5 — a worst-case scenario. Puerto Rico Governor Ricardo Rosselló declared a state of emergency to help the island prepare and speed the flow of disaster aid.

All this comes less than two weeks after Irma struck the Caribbean as one of the strongest hurricanes in history. The damage from Irma in the U.S. Virgin Islands was so severe that local officials, whose economy depends on tourism, have told visitors to stay away. Cruise ships have been put into service as rescue vessels. In some of the hardest hit islands, like Barbuda, Anguilla, and St. Martin, recovery could take years.

Even though the wounds of Irma are still fresh, it’s important to remember that a hurricane as strong as Maria is exceedingly rare in the Caribbean. According to weather records dating back to 1851, no Category 5 hurricane has ever struck Dominica. Hurricane David, in 1979, was the only Category 4 to do so. That storm ruined the local economy and left roughly three-quarters of the population homeless.

Irma was a powerful Category 5, but its center moved past Puerto Rico without a direct landfall, so although the island experienced massive power outages, Irma could have been much worse.

Maria will likely be much worse.

Weather models show Maria crossing the center of Puerto Rico at peak strength, becoming the first Category 5 to do so since 1928, and only the second in recorded history. The result could be catastrophic, with heavy rainfall leading to inland flooding and landslides, winds in excess of 170 mph battering coastal cities, and storm surge of six to nine feet inundating homes and businesses along the shoreline.

It’s impossible to overstate how serious a storm like Maria is. The U.S. Virgin Islands’ Governor Kenneth Mapp warned of high winds and torrential rain and called on islanders to prepare, even as relief supplies for Irma continued to pour in. “If your home is damaged,” he said, “do not ride out this storm in your home.”