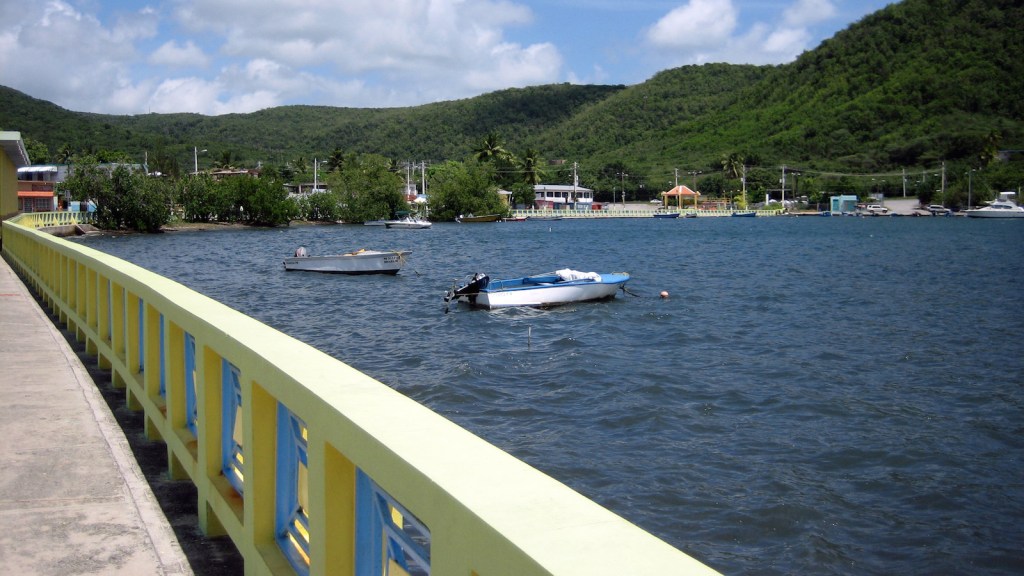 Tucked in the southwest corner of Puerto Rico, the town of Guanica sits on the edge of a small bay that’s only about a quarter of a mile wide. Rafael Rodriguez, a commercial boat captain who has lived in the area his entire life, says that the water is dark, calm, and relaxing. In Guanica, he says, the waterfront is where people gather.

The bordering mountain range protected Guanica from the worst of Hurricane Maria, Rodriguez says, and on the surface life is largely back to the way it was before the storm. But underneath the water, the churning hurricane waves dredged up buried sand and pulled up sediment that was full of polychlorinated biphenyls, or PCBs — old manufacturing chemicals linked to health problems ranging from cardiovascular disease to cancer.

“The damage the hurricane did is hiding,” Rodriguez says.

Guanica Bay already had some of of the highest PCB concentrations in North America before the hurricane hit, according to a 2014 National Oceanic and Atmospheric Administration study. Still, the problem has gone largely unaddressed outside of outreach efforts from scientists working in the region. The community of just under 20,000 people, over 60 percent of which is below the poverty line, swims and fishes in the PCB-filled waters.

PCBs were banned in U.S. manufacturing in 1979, but they are environmentally persistent, so finding them in the area wasn’t unusual, says David Whitall, a NOAA ecologist who worked on the 2014 study. “But to see levels as high as we did was surprising,” he says.

In a 2016 study, a University of Miami professor found that parts of the bay registered PCBs at the second highest level ever reported in the U.S. The environmental health expert, Naresh Kumar, knew that storms had the potential to make PCB contamination worse. So when he saw Hurricanes Maria and Irma start to creep up on Puerto Rico last summer, he got ready to return to Guanica Bay. As soon as a flight was available after Maria, Kumar headed to Puerto Rico and started collecting new samples.

Kumar’s suspicion proved correct: Initial analysis of the newly collected samples show that the levels of PCBs in the bay are around 10 times higher than they were before the hurricane hit, he says. With refined calculations, he says that that number could be an underestimate.

Kumar also measured fish samples collected from the bay after the hurricane and found that they had PCB concentrations of 12 parts per million. The Food and Drug Administration caps the tolerance level in edible fish tissue at 2 parts per million.

The fish served in restaurants in the region and purchased commercially typically comes from far out at sea. That catch wouldn’t be affected by the pollution concentrated near the shore. But people living in Guanica catch and eat fish directly from the bay, exposing themselves to the PCBs—and Kumar guesses, they may have relied more heavily on that food supply as Puerto Rico struggled after the storm.

It’s not clear where the PCBs came from initially, which means it’s hard to hold anyone directly responsible for the problem. And no governmental agencies have taken steps to respond to the pollution. Kumar sent the findings from the 2016 report to the EPA and plans to send another with updated calculations from the aftermath of the hurricane.

“They’ve done nothing,” he says about the agency’s response.

EPA Press Officer Tayler Covington said in an email that the agency assessed data from Guanica Bay and determined that the PCB concentrations were not high enough to warrant cleanup under the Superfund program.

In the meantime, Kumar and his team works to educate people in the region about the risks of the bay and the risks of eating the fish that lives in the water. He’s published fish advisories and he’s working in Guanica schools to distribute information about the pollution. “As a research scientist, what I can do is publish research and try to help the community,” Kumar says.

With the pollution concentrations elevated by the hurricane, the work takes on a new urgency. The health effects of PCBs may be affecting residents of the region, Kumar says, though there is only anecdotal evidence at this point. “Based on informal conversations, Guanica has many instances of premature diseases like strokes and cancer in young people that you usually don’t see,” he says.

Rodriguez, who works with Kumar and his team to secure boats and supplies when they’re conducting their research, helps spread Kumar’s message. He grew up in Guanica and fished in the bay as a kid. But now, he sometimes walks down the boardwalk to warn people hanging lines into the water — who, he says, aren’t always receptive to the information.

“People around the town don’t know about what’s in the bay,” Rodriguez says, adding that most residents think of it as a gorgeous place to spend time with family. “I try to do as much as I can.”