If edible insects are the future, we should talk about poop 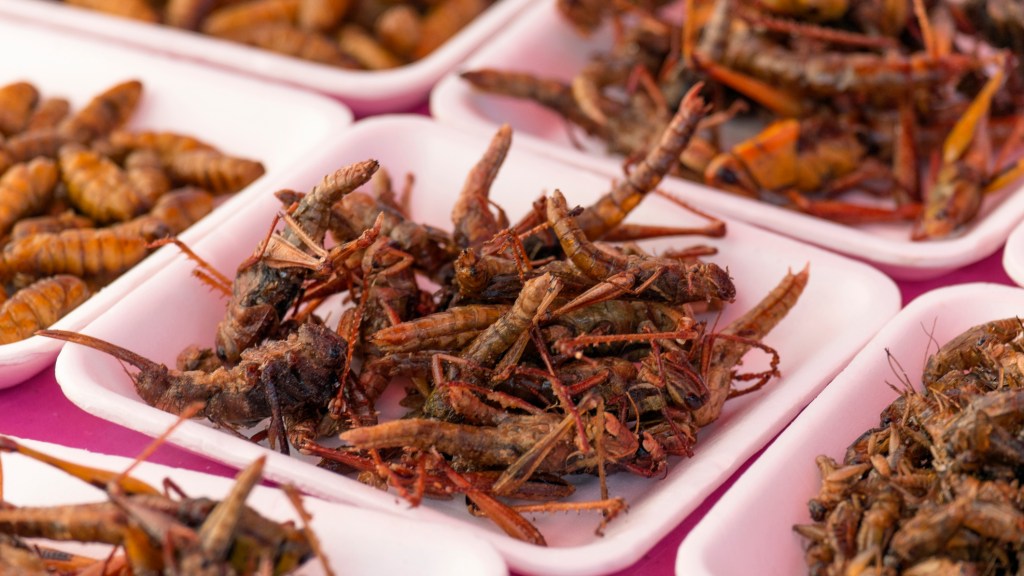 If edible insects are the future, we should talk about poop

Two billion people can’t be wrong — at least, not about the nearly 2,000 species of insects that make for good eatin’ around the world. But nobody has to pitch you on the benefits of insectivory, right? Easier on the environment, full of weird nutrients, and whoa, check out that feed conversion ratio: It takes half as much food as you’d give to pigs and chickens and a 12th as much as cattle to get the same amount of cricket protein on the far side of the abattoir. If Earth might have to feed 9 billion people in the coming decades, insects are what’s for dinner. Ask the United Nations.

But let’s slow down this Snowpiercer train a bit. Insects like crickets and beetles are, indeed, a very good source of protein and other nutrients. But the ones that humans already eat tend to be wild-caught and consumed in comparatively small numbers. That’s not the scaled-up future of insectivory that the U.N. foresaw in 2013. Factory farm facilities that can breed, raise, kill, and ship millions of critters require more food as input, output more waste, and raise thorny issues from entomology to ethics. “Actually, we don’t know that much,” says Åsa Berggren, an ecologist at the Swedish University of Agricultural Sciences in Uppsala who has been trying to sort out how sustainable an insect-based menu would be. “And people don’t know what we don’t know.”

That ignorance should bug you, because we humans have already steered our food system into a sustainability crisis. As any soy-swilling vegan will tell you at the drop of a hemp-knit hat, the global system of raising animal protein for people to eat has flaws. People use 77 percent of the world’s agricultural land to grow feed for meat animals, even though they represent just 17 percent of calories consumed. Livestock emit 14.5 percent of climate change-causing greenhouse gases; farmed hogs represent a possible reservoir of pandemic-causing influenza viruses; chicken farming fueled the development of antibiotic-resistant bacteria; and giant pools of hog waste threaten natural disaster every time a hurricane brushes the Carolinas.

But those aren’t problems with animal protein per se; they’re problems of scale and capitalism. And now the future of insects as food threatens to become every bit as industrial. Some European countries already have “mass-rearing facilities, enormous, like airplane hangar-sized,” Berggren says. But it doesn’t have to be a catastrophe. The newly buzzy insect biz is an opportunity. “If you start with totally new animals, we should be able to do it better. Knowing what we know now, what could we change if we started all over again, so we don’t continue to make it worse?”

Writing in the journal Trends in Ecology and Evolution, Berggren and her colleagues lay out a sort of anti-review article, a litany not of what’s known but of the unknowns that emerge when a swarm of new companies start mass-producing insects. According to one analysis, edible insects will be a $710 million global market in the next five years — multiple species, ground into flour or sold as bars and snacks. But growing up all those insects will mean more space for unintended consequences.

So, for example, today people use a huge amount of land on Earth to grow plants then fed to animals so people can eat the animals. Insects need less of that food to become more protein, and more of each insect (depending on the species) is actually edible — insects, having chitinous exoskeletons, make no bones about that. But that still means productive agricultural land has to be turned from feeding people to feeding critters. What you’d really like is to scroll through the thousands of edible insects and find species that grow fast, aren’t too finicky about living conditions, and most importantly are not picky eaters. Best case: insects that eat something people don’t, or can’t — solving a recycling problem while freeing up land to grow food for humans instead of human prey. And at the other end of the problem, it’d be great to figure out how much waste zillions of insects create, what’s in it, and how to use it.

The fact that few people are thinking about sustainability fits a pattern. “We think, oh, insects are going to be the silver bullet on protein and nutrition. But what about all this other stuff?” says Bob Martin, director of the Food System Policy Program at the Johns Hopkins School of Public Health. It happened with chicken, he says, and it’s currently happening with aquaculture, as people start building huge offshore fish farms and dousing them with antibiotics. It’s possible that the companies working on insects and fish have answers to some of these questions. They’re just not publishing them.

For example, Aspire Food Group, which produces crickets and cricket flour, sells all its “frass” — cricket poop — to farmers, who use it as a soil amendment. Frass’ percentage amounts of nitrogen, phosphorous, and potassium aren’t much better than readily available fertilizers, says Gabe Mott, Aspire’s cofounder and chief operating officer, but some people think frass amps up plant growth rates. Published work isn’t clear; the body of literature on cricket frass is more of a thorax, apparently. And crickets have other waste besides frass; at the scale Aspire is working in now, it’s negligible. When they get up to thousands of tons of crickets? Not so much. “We want to make sure long before we get there that we have a place to send it and it has a meaningful agricultural value,” Mott says.

That day is coming. “We’re putting in the neighborhood of 5,000 or 10,000 crickets in a container, and we’ve got thousands of containers,” Mott says. “We can do research on a scale no lab has ever done.” That translates to processing 1 million crickets a day.

To be clear, by some measures, the problem with feeding the world isn’t one of quantity but of distribution. Cut the amount of protein Americans eat, and the land used to produce the plants that feed that meat could instead grow fruits and vegetables, presumably. Americans still eat way more protein and fat than the world average, and two to three times as much red meat as people anywhere else — even as some countries (and poorer parts of the U.S.) experience malnutrition.

So avoiding that Snowpiercer future is about more than making sure the poor people in the back of the global train have enough cheap insect protein, while the 0.01 percenters up front get steak. “I do believe in insects as a food source. I have a positive outlook,” Berggren says. “I would like to have people see it as not one simple solution — just breed lots of insects of one kind and everything is fine. The world and our food systems are way more complex than that.” Insects are an opportunity; imagine getting a global food network right, from the very start.