When President Donald Trump announced on June 1 that he had decided to withdraw the United States from the Paris climate accord, he asserted that staying in the pact would prevent our nation from further developing its fossil fuel reserves. Critics understandably have called this a setback for global efforts to curb greenhouse gas pollution.

But there is another, equally important argument for transitioning to clean fuels. Tens of thousands of Americans die every year from old-fashioned air pollution, generated by electric power plants that burn fossil fuels. Estimates vary, but between 7,500 and 52,000 people in the United States meet early deaths because of small particles resulting from power plant emissions. That’s huge. It is roughly comparable to the 40,000 people that died in car crashes in 2016.

In a recent research study with colleagues at Carnegie Mellon, I analyzed how human health and the environment would be affected if all coal-fired power plants in the United States switched to natural gas — an extension of a trend that is already underway. We found that such a shift would have tremendous positive effects on human health in America. We estimate that low natural gas prices and state policies that move utilities away from coal are savings tens of thousands of lives and tens of billions of dollars each year.

We’ve known that air pollution is linked to human health since Lester Lave and Eugene Seskin published their pioneering quantitative work in Science in 1970. They studied “the long-term effects of growing up in, and living in, a polluted atmosphere,” using economists’ favorite statistical technique — regression analysis — to look at a few locales where data were available.

In England, they found that “cleaning the air to the level of cleanliness enjoyed by the area with the best air [in the U.K.] would mean a 40 percent drop in the bronchitis death rate among males.” Male and female results were about the same. Since few women worked in industry in those days, this finding indicated that the effect was independent of occupational exposure. 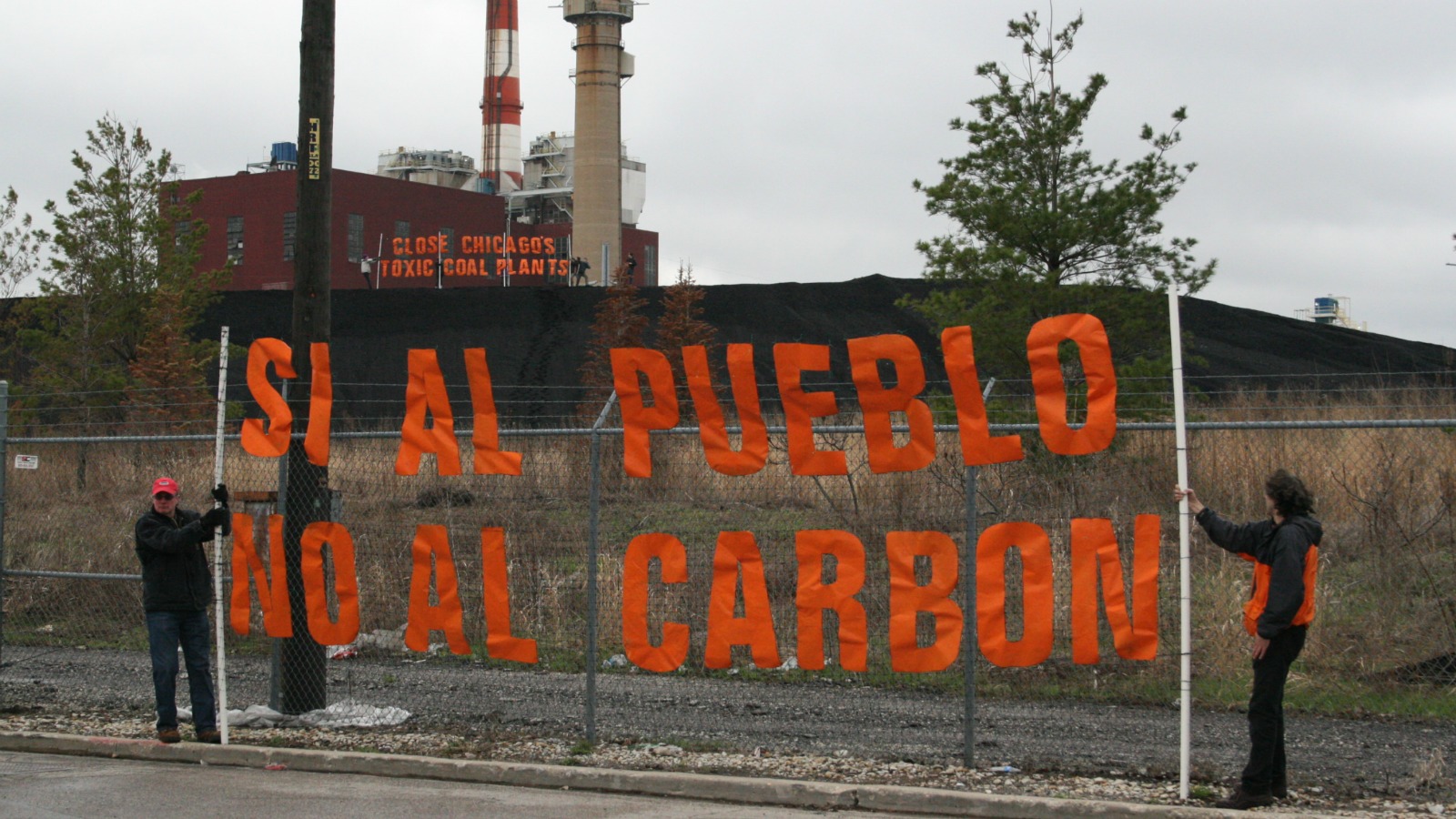 In Buffalo, New York, they found that cleaning the air to the level of the cleanest area would lower the average bronchitis death rate by 50 percent. Stomach cancer was much higher in areas with more air pollution. Air pollution affects the heart, too: They concluded that a substantial abatement of air pollution would lead to a 10 to 15 percent reduction in deaths and illnesses from cardiovascular disease.

The year 1993 saw the publication of an enormous study that followed over 8,000 adults for 15 years in six U.S. cities. The cities — Topeka; St. Louis; Watertown, Massachusetts; Steubenville, Ohio; Harriman, Tennessee; and Portage, Wisconsin — had differing levels of air pollution.

The researchers measured pollution in detail. After adjusting for factors like smoking, they found that the death rate was 26 percent higher in the most polluted cities than in the cleanest ones. They wrote, “Air pollution was positively associated with death from lung cancer and cardiopulmonary disease …. Mortality was most strongly associated with air pollution with fine particulates, including sulfates.” Fine particulate pollution is a mixture of solid particles and liquid droplets, many times smaller than a human hair.

Haven’t we reduced pollution so thoroughly in the United States since then that we no longer have a problem? Well, no. There are some toxins, such as alcohol, that your body can deal with at a low level and that will kill you only at high doses. But current air pollution levels are not that low.

Another huge study, published in 2013, focused on small particulates in the air of 545 U.S. counties and yearly county-specific life expectancy for the period 2000–2007. It found that cleaning up the air is still very beneficial. Life expectancy has increased in the United States in recent decades, due to things like a decrease in smoking and general attention to diet and exercise. But this research found that 18 percent of the recent increase in urban life expectancy was due to decreased air pollution. 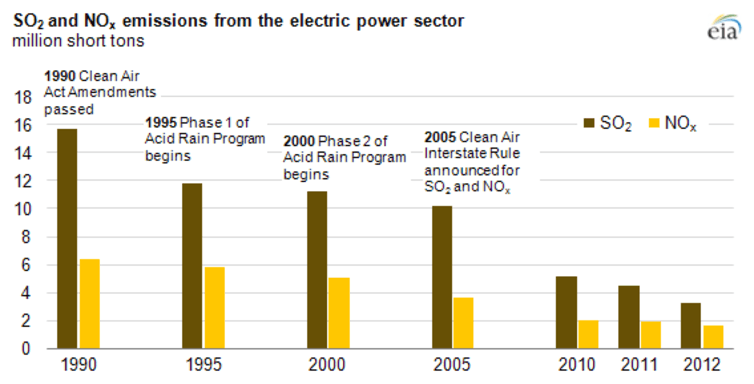 Much of this fine particle pollution comes from electric power plants, either directly or as pollutants such as sulfur dioxide that chemically evolve downwind of the plant. So we asked in our research: What would happen if current low natural gas prices or pollution control policies caused all U.S. coal-burning power plants to be replaced by natural gas generators?

Somewhat surprisingly to us, such a shift would not lead to major progress on climate change. Although natural gas is less carbon-intensive than coal, some natural gas leaks into the air at drilling sites, processing plants, and pipelines. Natural gas consists mainly of methane, a greenhouse gas that has much more powerful heat-trapping properties than carbon dioxide. If current estimates are correct that the leakage rate is around 3 percent, then we calculated that switching all coal plants to average-efficiency natural gas plants would have little effect on the power sector’s contribution to climate change.

But that switch would greatly reduce pollution that is harming our country right now. Switching from coal to natural gas would reduce sulfur dioxide emissions by more than 90 percent and nitrogen oxide emissions by more than 60 percent. These compounds are major causes of fine particulate pollution. Reductions on this level would lower the total cost of national annual human health damages by $20 billion to $50 billion annually. We found that the Southeast and the Ohio Valley, where most of the coal is burned, would capture the lion’s share of these benefits. 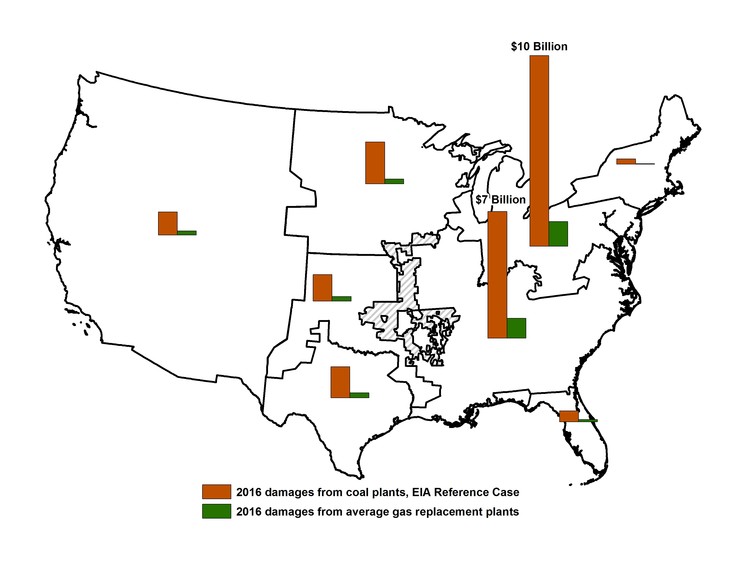 More coal use will not create more jobs

Almost all coal use in the United States is for producing electricity. Coal mining jobs are declining partly because low natural gas prices have cut coal’s market share from 50 percent in 2000 to 30 percent in 2016.

The other key factor is automation. A great coal boom took place in the United States from 1978 to the 2008 recession. The number of tons of coal mined increased by 85 percent, but the number of miners fell by half. Productivity (tons mined per miner) increased by 350 percent, due partially to a shift from underground to surface mines, but largely from the introduction of highly mechanized systems like long wall mining that require far fewer miners. The $340 million in annual federal tax subsidies that U.S. coal companies receive is not putting more miners to work.

Some great companies understand these human health issues, and are taking big risks to push technology that may allow coal to be used without pollution. Southern Company, AEP, NETpower and a few others are using American know-how to reduce coal’s emissions.

But without a national consensus that both conventional pollution and greenhouse gas pollution have to be reduced, their engineering will founder in the boardroom. If President Trump succeeds in bringing back coal while gutting environmental regulations, all he’ll bring back is more pollution and more early deaths.