A white cloud of pesticides had drifted into Fidelia Morales’s backyard, coating her children’s swing set.

The 40-year-old mother of five gestured toward the citrus groves that surround her house in California’s Central Valley as she recounted when an air blast sprayer sent chemicals floating onto her property last year — landing on her family’s red and blue jungle gym.

“We know this is dangerous for the kids, but what are we supposed to do?” she said on a recent afternoon, speaking in Spanish through a translator. Morales said she fears that these kinds of drifts, as well as long-term exposure to a variety of chemicals in the air, have hurt her children, ages 9 to 20, who have struggled to focus in school and have suffered from bronchitis, asthma, and other chronic illnesses.

Under Barack Obama, the U.S. Environmental Protection Agency proposed an agricultural ban on chlorpyrifos, one pesticide widely used in her region, based on the growing body of research documenting the risks for farmworkers and communities, including links to brain damage in children.

Donald Trump’s administration, however, has rejected the science, announcing a reversal of the ban. That means that despite recent victories for families and environmentalists who have fought for more than a decade for protections from the insecticide, widespread use will continue in California, where a majority of the fruits and nuts in the U.S. are grown.

“There’s a sense of helplessness,” said Luis Medellin, a 30-year-old dairy worker, sitting with his three younger sisters at his family’s home in the small agricultural town of Lindsay. “I’m being poisoned and I can’t do anything about it. It’s like a slow death.”

It’s difficult to conclusively determine how chlorpyrifos may have contributed to individual children’s conditions, but epidemiological studies have found links between the pesticide and a number of health conditions — research that led EPA officials to recommend the ban in 2015. Manufacturers and growers continue to assert that the chemical is safe and say that the studies are flawed.

Pregnant women who lived near fields and farms that use chlorpyrifos experienced an increased risk of having a child with autism, according to a University of California at Davis study. Low to moderate levels of chlorpyrifos exposure during pregnancy were also linked to lower IQs and memory problems, according to researchers at Columbia and UC Berkeley. Studies have further raised concerns about decreased lung function and reduced fertility.

Chlorpyrifos — a neurotoxic pesticide widely used to kill insects in almond, walnut, orange, grape, broccoli, and other crop farming — was banned for residential use in 2000 because of environmental and health concerns.

The EPA’s prior move to prohibit the pesticide in agriculture stemmed from a decade-long legal fight with environmental groups, which are continuing to push for the ban in court. Under the new policy, the EPA won’t have to reevaluate health risks of the chemical for another five years and its use will continue.

In California, Latino children are 91 percent more likely than white students to attend schools near heavy pesticide use, according to state data. Tulare County is also located in a region considered to have the highest poverty rate in the state and the worst air pollution in the U.S.

“We are very sick,” said Irma Medellin, community organizer with El Quinto Sol de America, a Lindsay-based advocacy group that has studied chlorpyrifos exposure and advocated for the ban. “Everyone who lives in this community is affected.”

Zenaida Muñoz, a 32-year-old mother of three, said she used to walk through the orange groves on a daily basis for exercise when she was pregnant with one of her sons, who is now 9 years old. After he was born, he struggled to speak for several years and he had behavioral problems at home and in school. He was later diagnosed with autism.

Chlorpyrifos is frequently used on oranges. 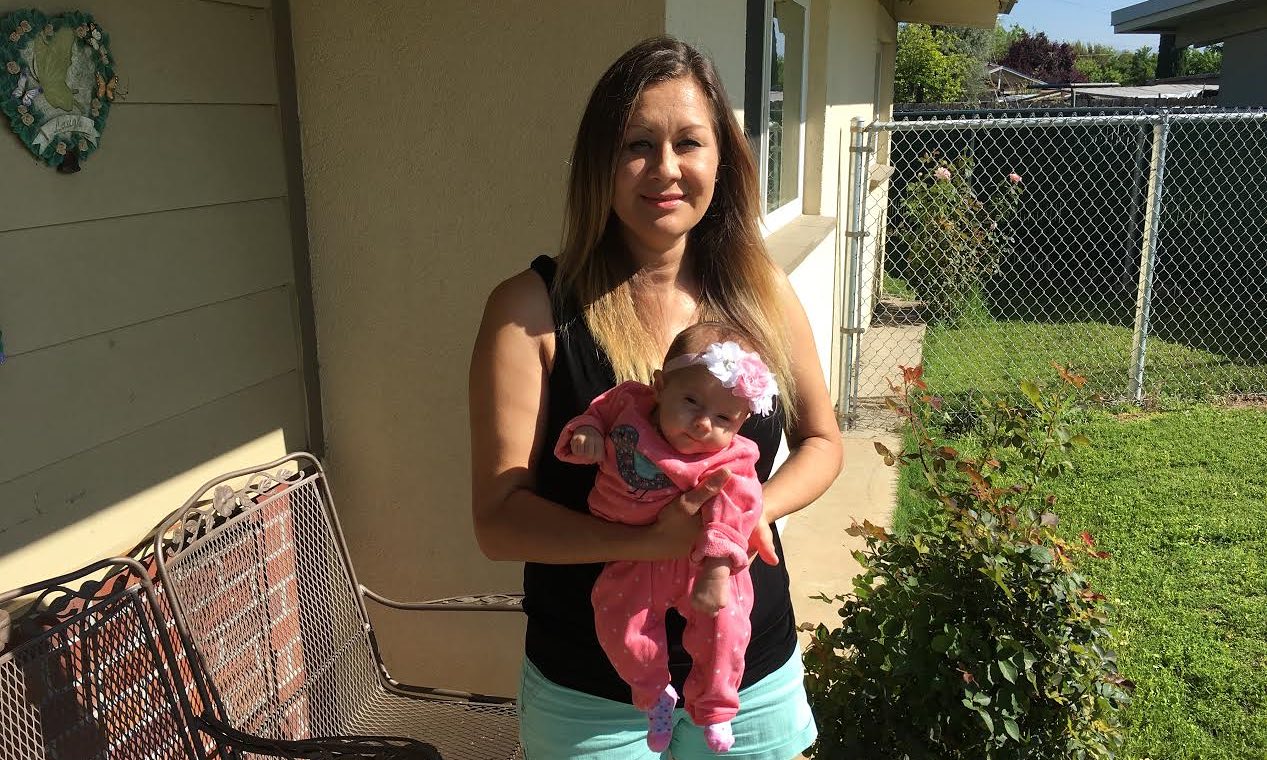 Zenaida Munño and her newborn. She used to walk through orange groves on a daily basis for exercise when she was pregnant with one of her sons, who was later diagnosed with autism. Sam Levin/The Guardian

“I never realized these chemicals could potentially cause harm,” she said, seated in her house in a small town called Cutler, as she clutched her newborn baby. Her son, now in the third grade, ran up to her with a squirt gun, begging to go play outside.

Muñoz said she now avoids the local orchards, especially when she can smell recently sprayed pesticide — a stench that makes her want to throw up.

Families that live across from the crops should consider moving, she added: “Even if it seems like they’re not impacted, they are.”

Domitila Lemus, 68, recalled an episode when a pesticide spray drifted toward a group of students on a school playground, including her 8-year-old granddaughter.

“They were out of breath. Some were throwing up,” Lemus recalled. “The children had teary eyes … It’s a strong smell that gets into your head and hurts your brain.”

Jannet Rodriguez, whose husband works in citrus, said workers were afraid to speak up: “They feel they’ll lose their jobs.” When she worked in agriculture, she said posted warning signs about the dangers of pesticides were never clear to her and other Mexican immigrants, many of whom don’t speak English. “They never told us what these signs meant.”

When Trump’s EPA head, Scott Pruitt, undid activists’ efforts one month after his confirmation — with a statement praising a return to “using sound science in decision-making” — families in Tulare County were devastated.

“It was pain in my heart,” said Amy Huerta, a 20-year-old college student who grew up in a trailer park in Lindsay where pesticides would often drift into their home. “Now we have to start all over again.”

One study detected chlorpyrifos in three-quarters of air samples in Lindsay — 11 percent above levels deemed “acceptable” by the EPA for 24-hour exposure by children.

Huerta recalled sharing a bed with her younger sister who would scratch herself bloody. Huerta said it was because of pesticides irritating her skin.

Morales said her 9-year-old son has trouble concentrating in school and staying seated in class — and that she suspects chlorpyrifos is likely to blame given the family’s proximity to citrus fields. Marianna Santos, pesticide supervisor in the Tulare County agricultural commissioner’s office, said the drift incident Morales described was under investigation, but that it did not appear chlorpyrifos was involved in that spray.

Bob Blakely, vice president of California Citrus Mutual, a Tulare County industry group that supports chlorpyrifos, said growers were dependent on the chemical and claimed that its application is highly controlled in the state. “We’re very heavily regulated. I’d be more concerned about children not eating fresh fruits and vegetables.”

Dow AgroSciences, which manufactures the pesticide under the name Lorsban, has consistently argued that studies raising concerns are flawed and that the science is inconclusive.

“Farmers in about 100 countries rely on the effectiveness of chlorpyrifos to protect more than 50 crops,” the company said in a statement to the Guardian, claiming that “authorized uses” of the chemical offer “wide margins of protection for human health and safety.”

Carol Burns, a Dow epidemiology consultant, criticized the UC and Columbia studies in an email, claiming that other research suggests there are “no significant associations between possible exposure to chlorpyrifos and any health effects in the children.”

The EPA did not respond to requests for comment. 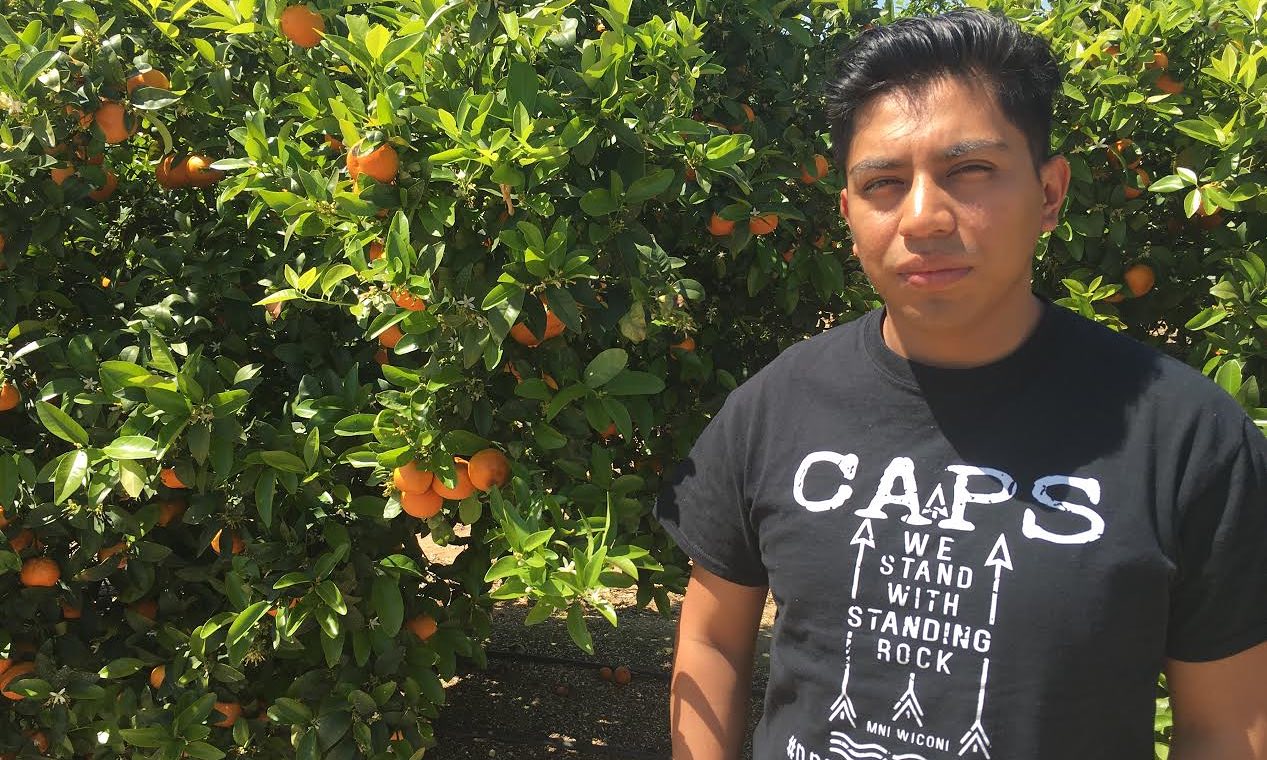 Angel Garcia, El Quinto Sol community organizer and founder of the Coalition for Advocating for Pesticide Safety, said organizing against powerful agricultural interests was difficult in California and particularly in Tulare County.

“Money is the law here,” the Lindsay native said as he drove past a row of citrus groves. He and other activists are pushing California to be a leader in the resistance to Trump and ban chlorpyrifos in the absence of the EPA’s inaction.

But it’s unclear if the state will take on that role. Asked about the calls for state prohibition, Charlotte Fadipe, a spokesperson for the California Department of Pesticide Regulation, said the agency was “looking at how this pesticide is used and if further restrictions on its use are warranted.”

Why people have to learn to live with wildfires