In Pruitt's world, climate change isn't such a 'bad thing' 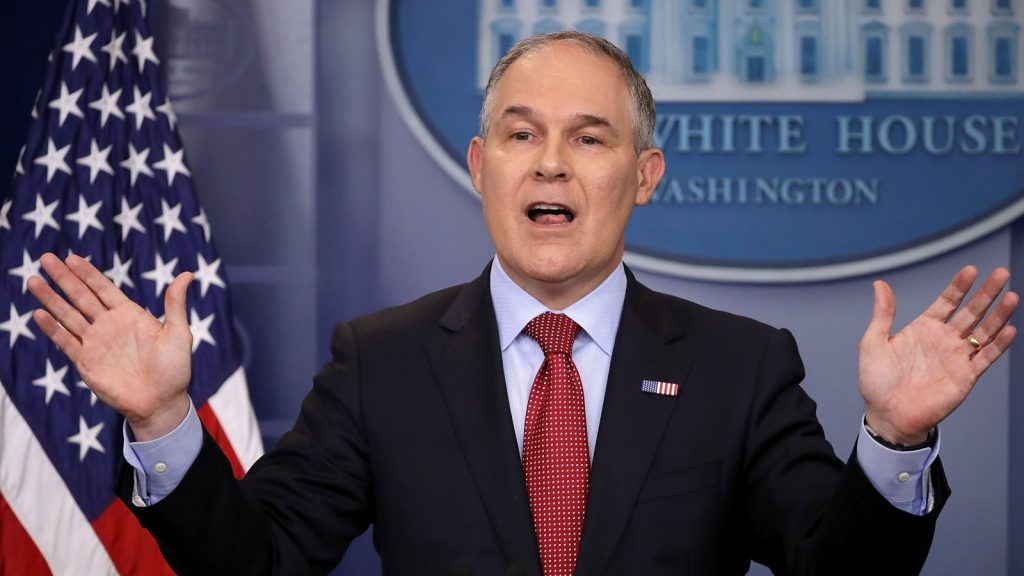 In Pruitt’s world, climate change isn’t such a ‘bad thing’

Scott Pruitt, the head of the Environmental Protection Agency, has suggested that global warming may be beneficial to humans in his latest departure from mainstream climate science.

Pruitt, who has previously erred by denying that carbon dioxide is a key driver of climate change, has again caused consternation among scientists by suggesting that warming temperatures could benefit civilization.

The EPA administrator said that humans are contributing to climate change “to a certain degree,” but added: “We know humans have most flourished during times of warming trends. There are assumptions made that because the climate is warming that necessarily is a bad thing.

“Do we know what the ideal surface temperature should be in the year 2100 or year 2018?” he told a TV station in Nevada. “It’s fairly arrogant for us to think we know exactly what it should be in 2100.”

Pruitt said he wanted an “honest, transparent debate about what we do know and what we don’t know, so the American people can be informed and make decisions on their own.”

Under Pruitt’s leadership, the EPA is mulling whether to stage a televised “red team, blue team” debate between climate scientists and those who deny the established science that human activity is warming the planet.

President Trump has also repeatedly questioned the science of climate change, tweeting during a cold snap in December that the U.S. “could use a little bit of that good old Global Warming that our Country, but not other countries, was going to pay TRILLIONS OF DOLLARS to protect against.”

The EPA itself is unequivocal that warming temperatures, and resulting environmental changes, are a danger to human health via heatwaves, smoke from increased wildfires, worsening smog, extreme weather events, spread of diseases, water-borne illnesses, and food insecurity.

This array of health-related challenges has prompted the medical journal The Lancet to state that tackling climate change will be “the greatest global health opportunity of the 21st century.”

National security experts, including those at the Pentagon, have also warned that climate change is set to create a sprawling humanitarian challenge, as millions of people look to escape failing crops, inundated land, drought, and conflict.

Research has pointed to some potential benefits in certain areas of the world, such as areas of the Arctic opening up to agriculture and shipping as frozen soils thaw and sea ice recedes. Deaths from severe cold are also expected to drop, albeit offset by rising mortality from heatwaves.

Human civilization has, until now, developed in a relatively stable climate. Rising temperatures, of around 1 degree Celsius since the Industrial Revolution, are pushing humanity into an environment it has never previously experienced. The last time sea surface temperatures were as high as now was around 120,000 years ago, when sea levels were up to 9 meters higher than today’s average.

“As the evidence becomes ever more compelling that climate change is real and human-caused, the forces of denial turn to other specious arguments, like ‘it will be good for us,’” said Michael Mann, a climate scientist at Penn State University.

“There is no consistency at all to their various arguments other than that we should continue to burn fossil fuels.”

Since being installed by Trump to lead the EPA, Pruitt has overseen the repeal or delay of dozens of environmental rules, including the Obama administration’s Clean Power Plan, which sought to curb greenhouse gas emissions from coal-fired power plants.

“There was a declared war on coal, a war on fossil fuels,” Pruitt said in his Nevada interview. “The EPA was weaponized against certain sectors of our economy and that’s not the role of a regulator. Renewables need to be part of our energy mix, but to think that will be the dominant fuel is simply fanciful.”