Is Budweiser the king of green beers? We unpacked its Super Bowl ads. 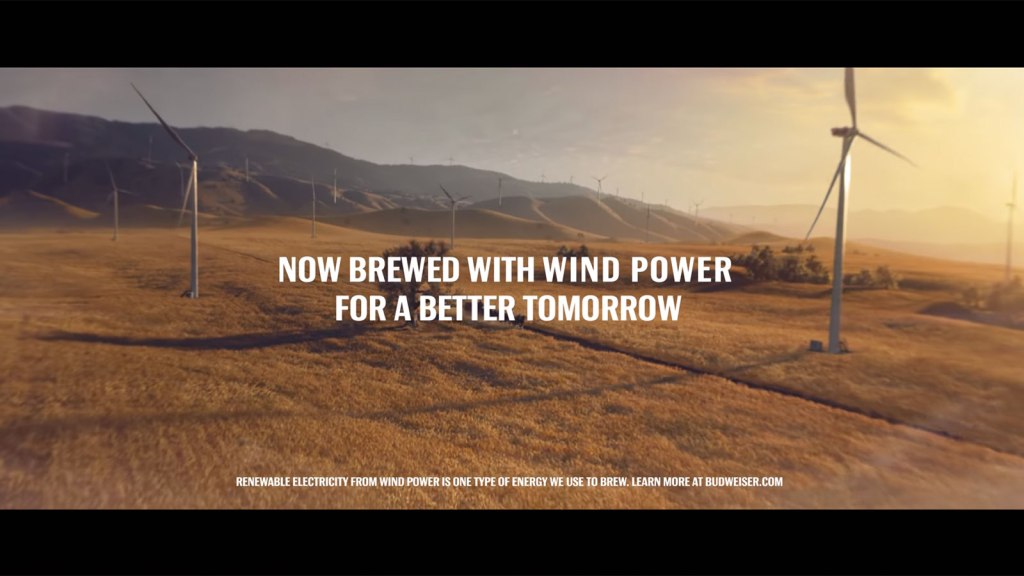 Is Budweiser the king of green beers? We unpacked its Super Bowl ads.

Super Bowl LIII made history yesterday as the lowest-scoring NFL championship of all time. In other words, it was kind of a snoozefest. But if the lack of touchdowns — combined with shirtless Adam Levine — didn’t compel you to turn off the TV, you may have noticed an interesting trend in the big game’s beer commercials. Budweiser, the so-called “king of beers,” is trying really hard to make itself the beer of tree-hugging, health-conscious millennials.

In the most blatant enviro-targeting ad, the scene opens with a Dalmatian sitting atop a Bud-laden wagon pulled by Clydesdales romping through a picturesque field, which upon zoom-out reveals itself to be a wind farm. Cue the line “Now brewed with wind power, for a better tomorrow.” Oh, and did we mention it’s set to the tune of “Blowin’ in the Wind?” Subtle.

Then, in a Monty Python-esque epic sequence of royal mishaps and alcoholic adventuring, the company made it clear Bud Light is brewed with no corn syrup, directly calling out its competitors — Miller Lite and Coors Light — for using the much-maligned syrup.

To be clear, Bud Light is not brewed with corn syrup, and Miller Lite and Coors Light are. pic.twitter.com/x6tWqdSRXN

Anheuser-Busch is far from the first company to take advantage of Americans’ growing concerns over climate change. Remember those midterm election campaign ads touting candidates’ climate credentials? We certainly do. But to see green issues front and center (at least for 30 seconds at a time) during the Super Bowl was a little surreal to some viewers.

“I never thought there’d be an intersection between AGRICULTURE and FOOTBALL, but then came the BREW-HA-HA about CORN SYRUP in BEER!” Washington Post columnist Tamar Haspel tweeted about the king’s quest ad. But as Haspel points out in her extended thread, being an environmentally friendly beer company takes more than a few commercials.

The criticism of Bud’s Super Bowl ads has been swift. Understandably, the corn industry was pretty miffed that America’s favorite beer would publicly turn on corn farmers.

.@BudLight America’s corn farmers are disappointed in you. Our office is right down the road! We would love to discuss with you the many benefits of corn! Thanks @MillerLight and @CoorsLite for supporting our industry. https://t.co/6fIWtRdeeM

Bud Light uses rice to do the same job that corn syrup or other added sugars do in competing brews. So … how much does that really matter, planet-wise? Corn syrup, rice syrup, or no syrup, beer has never exactly been a health beverage. Rice and corn both have their associated emissions — but so do all foods. So maybe we should just eat less meat, and get over it?

Does it matter whether brewers use RICE or CORN SYRUP? Hell NO. If you really want to be all WOKE about it, rice has more greenhouse gas emissions because METHANE. But don’t pick your BEER because of the emissions from the ADJUNCTS. Just drive less.

As for the wind power, Anheuser-Busch InBev is indeed making moves to get to 100 percent renewable electricity by 2025. That’s big coming from such a massive company — the largest brewer in the world. AB isn’t just responsible for big names like Bud and Michelob, it also owns hipster favorites like Elysian, Devils Backbone, and hundreds more. The company set goals to improve sourcing, water stewardship and packaging for all its brews over the next several years. This is all great, and so is the push for greater transparency of ingredients in alcoholic beverages — but before we raise a glass, there are a few more things to consider.

Anheuser-Busch InBev is still a gigantic corporation, and one with apparent ties to the American Legislative Exchange Council, whose rejection of climate science and environmental regulation is so extreme that even Exxon Mobil decided to jump ship.

So at the end of the day, how should we view the green-tinged promise (and it’s not even Saint Patrick’s Day yet!) of these beer ads? Supporting progressive climate action on a political scale, in addition to its company-wide initiatives, would likely be in Anheuser-Busch InBev’s best interest. It’s also in our best interest if we want to keep drinking beer in the years to come. Climate change is coming for our crops, including rice, corn, hops, and barley — so unless we act fast, we won’t even have a frothy pint to drown our sorrows in.

Now if that doesn’t send you running for the vegan chicken wings and electric cars, I don’t know what will.