Carbon emissions are rising in the the United States, and it looks like the golden green state of California is part of the problem. Despite putting up acres of solar panels, California’s electric system produced more greenhouse gases in 2018 than in the previous year.

It’s part of a larger trend across the country. A preliminary estimate out this week says carbon dioxide emissions climbed 3.4 percent last year, the second largest increase in two decades, according to the research firm Rhodium Group.

What happened? An unusually cold spell last winter led people to turn up their furnaces. And after years of modest growth, the U.S. economy picked up in 2018. There were more planes in the air, more trucks delivering packages, more offices cranking air conditioners, and more factories burning fossil fuels.

In 2017, California had a relatively wet year, and was able to run water through hydropower turbines when the sun set over solar panels. There was less water to spare last year, so the state turned to gas plants in place of dams.

The rise in power-sector emissions is especially concerning in California because the state has made curbing pollution from power plants a priority, enacting legislation to promote renewable energy and cap fossil fuels. Yet California’s emissions have risen and fallen in line with the rest of the country.

In 2018, for instance, emissions from electricity generation rose 1.9 percent across the country, and 2 percent in California. 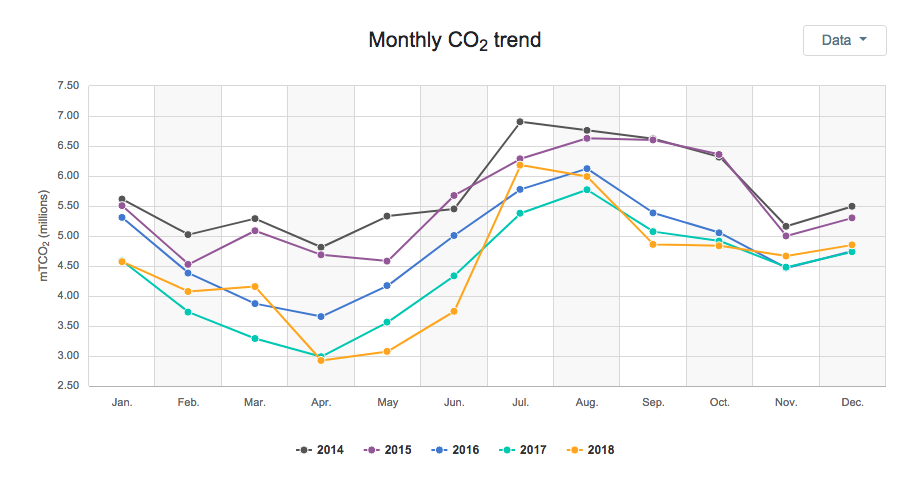 Trevor Houser, a climate and energy analyst at the Rhodium Group, said we shouldn’t make too much of California’s backsliding because the state had significant emissions reductions in the recent past. Last year’s 2 percent increase in electricity-sector emissions comes after a 9 percent decline in 2017 and a 13 percent decline in 2016. If you look at the three-year moving average, California is still making good progress when it comes to electricity.

Decarbonizing electricity is just the beginning of the challenge: “Far more important for California climate progress will be what happens in transportation, which is more than twice the emissions of the electric power in the state,” Houser said. 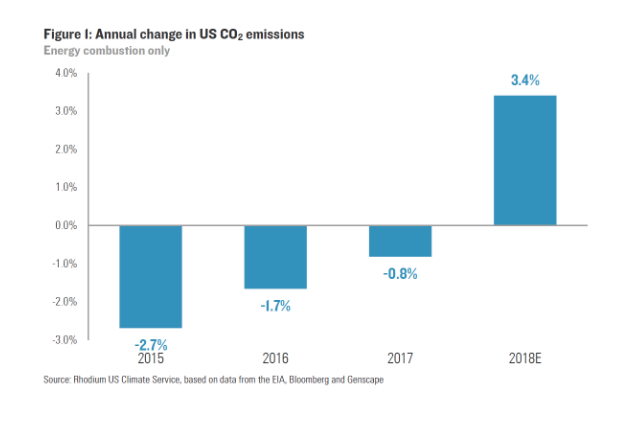 U.S. emissions peaked back in 2007, then quickly plunged with the Great Recession. A switch from coal power to natural gas and renewables also pushed down the country’s carbon pollution. All told, emissions fell 12 percent between 2007 and 2015. Since then, the country has continued to shift from super-polluting coal to less-polluting natural gas, but this report shows that we’ve been burning a lot more natural gas to make electricity. 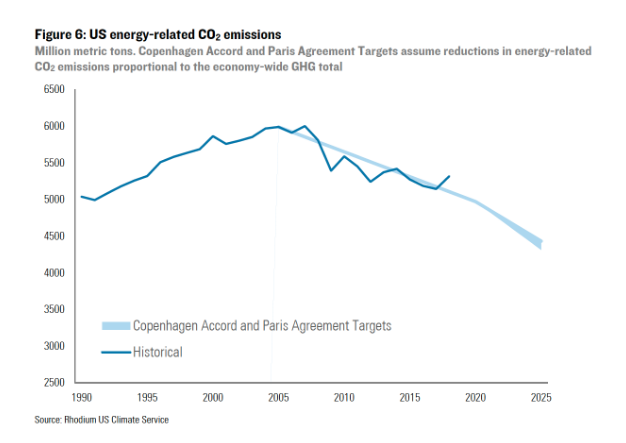 Previously it had looked like the United States had a shot at meeting pledges made as part of the Paris climate talks, despite President Donald Trump’s rejection of that agreement. Now it’s painfully obvious. in Last year’s emissions have pushed the United States far off target.