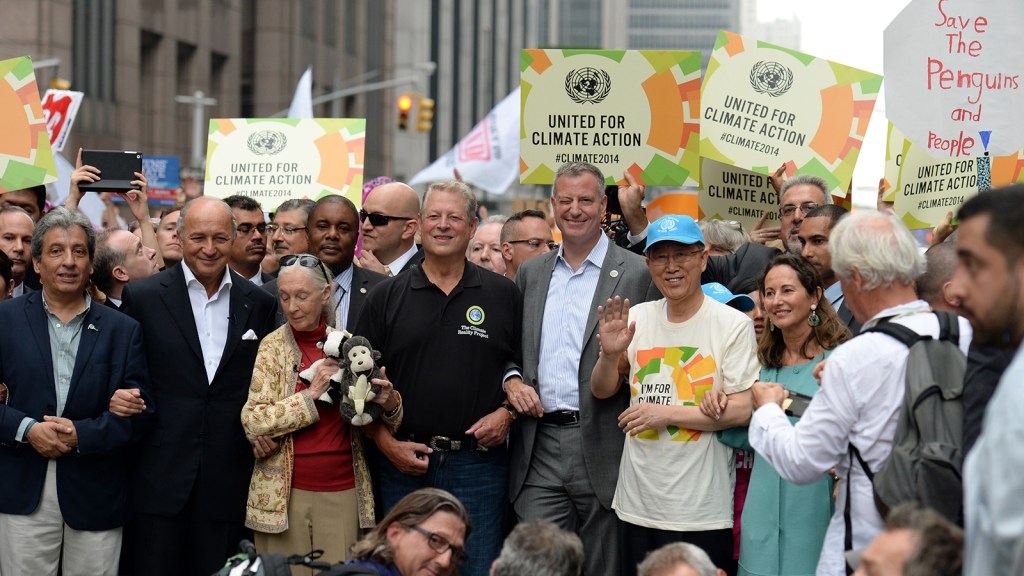 More than a year after the election of Donald Trump, the opposition Democratic Party still hasn’t found its voice on climate change.

That’s according to an essential overview of the situation from the Atlantic’s Robinson Meyer. Taken at face value, it’s not good news: Despite consistent rhetoric that climate change is among the most important challenges of the century, the Democratic Party has no large-scale cohesive plan to tackle it.

OK, that fact is worrying.

However, while Meyer is correct in his assessment of national politics, he makes one glaring omission: Climate action at the local and state level around the United States is, if anything, healthier and more ambitious than ever before. And it’s more often than not driven by Democrats. After a two decade-long quixotic quest for a unified federal climate policy, party members are finally willing to admit that their climate strategy can’t rest on economy-wide national legislation alone.

“We need to do everything we can to fight climate change,” says Keith Ellison, a congressman from Minnesota and deputy chair of the Democratic National Committee. “That means having a bill ready for passage when we take power, and it also means pushing for more immediate wins to lower carbon emissions at the state and local levels by building upon the work of aggressive climate policy in states like Minnesota, California, and New York.”

In city halls, boardrooms, and statehouses across America, what’s (not) happening on climate in today’s Washington is mostly a sideshow. The science is clear, climate-related disasters are happening now, and in most cases, it makes economic sense to take action immediately. So on the front lines of climate change, from San Juan to San Francisco, Minneapolis to Miami, the message is clear: This problem is too important to wait for Congress and the president to get their act together.

Since President Trump announced his intent to withdraw from the Paris Agreement back in June, more than 2,500 local leaders from all 50 states have signed a pledge saying, “We are still in.” In aggregate, those leaders — mayors, governors, CEOs, university presidents, etc. — represent more than half of all Americans. As an independent nation, they’d rank third in the world in terms of share of total emissions — nearly 10 percent of the global total. But this collective is pushing some of the most ambitious climate policy anywhere on Earth.

Even in red states like Kansas and Texas, bipartisan coalitions are emerging to take advantage of tremendous renewable energy resources in wind and solar. In 2005, Kansas sourced less than 1 percent of its electricity from wind. Now, it’s at 25 percent and, like California, is on pace to get 50 percent of its energy from renewable sources in the next few years. There is now a nationwide job boom in construction and installation of renewable energy.

If you ask Democrats and advocates directly, this kind of progress has changed the prevailing wisdom of what effective U.S. climate policy looks like.

“We know it’s possible because we’re doing it,” Washington Governor Jay Inslee said in a statement from Bonn, Germany. “The West Coast offers a blueprint: This is how you build a thriving, innovative economy that combats climate change and embraces a zero-emission future.”

Inslee is helping lead a sizeable, but unofficial, U.S. delegation at the ongoing United Nations Climate Change Conference in Bonn. Dan Firger of Bloomberg Philanthropies, whose boss, Michael Bloomberg serves as an outspoken U. N. special envoy for cities and climate action, calls it a “shadow climate government.”

“We’re less concerned about a silver bullet bill in Congress than we are about how best to get near-term carbon reductions done,” Firger told Grist, adding that the former New York City mayor believes in “bottom-up climate action.”

Lou Leonard, a senior vice president at the World Wildlife Fund, points to the Regional Greenhouse Gas Initiative, a market-based approach to reducing carbon emissions among several northeastern U.S. states. Already, one of the largest carbon schemes in the world, it stands to expand after this month’s elections resulted in Democratic victories in the Virginia and New Jersey governor races. Those states are now set to join the initiative.

“We cannot put all our chips in a federal solution,” says Leonard from Bonn, where his organization is helping support the We Are Still In delegation. “That’s not the way the U.S. economy works, that’s not the way politics works, and it’s certainly not the most obvious path to success.”

Still, The Atlantic’s Meyer has a point: Democrats need to be able to combine all these local policy victories into a national and global win. After all, worldwide carbon emissions are on pace for a new record high in 2017. But this inside-out approach has precedents for yielding real results.

Climate change inherently is a problem that requires local action. And increasingly, those working for climate policy have shifted their efforts to support local early adopters. It’s a strategy specifically designed to build an eventual national consensus.

“There’s more happening than many people are aware of,” says Steve Valk, the communications director for Citizens Climate Lobby. “City and state initiatives — as happened with gay marriage — can drive a national policy.”