Washington state gets another shot at the nation's first carbon tax 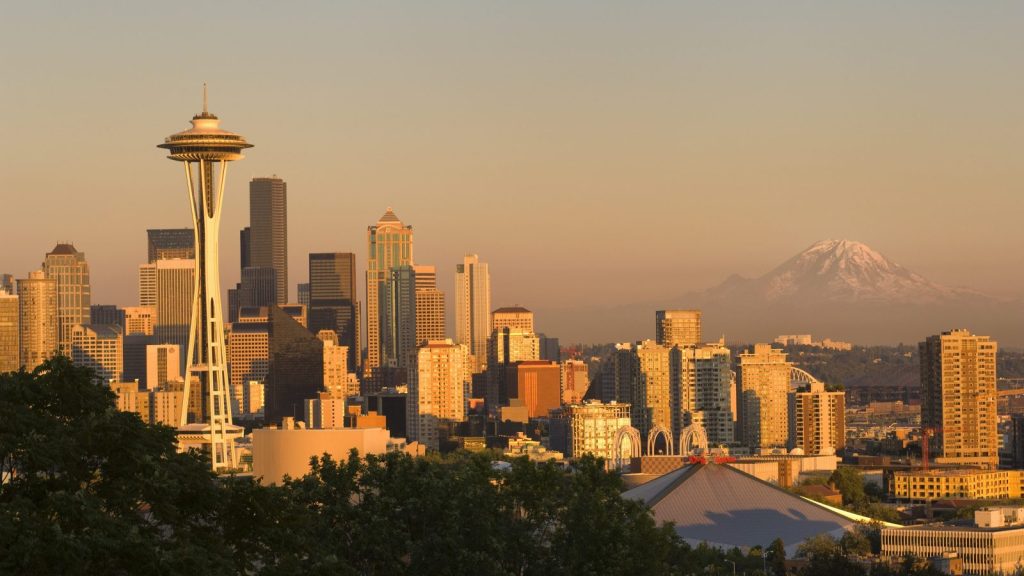 Last November, some environmentalists in Washington state went to the polls hoping voters would back an initiative creating the nation’s first tax on carbon pollution.

Initiative 732 went down to defeat as the country’s attention focused on Donald Trump’s shocking electoral college win. But now, one year later and buoyed by the Democrats’ pick up of a state Senate seat in last week’s elections, Washington will get another chance to pass meaningful climate policy.

The victory not only gave the party control of the State Senate, it will, along with an already Democratic governor’s mansion and House of Representatives, turn Washington solidly blue. That clears the way for a “full-scale effort in the next session of the Legislature” on climate, as Governor Jay Inslee said before the election.

“2018 is the year we’re going to push for something big in Washington,” says Nick Abraham, communications director of the Washington Conservation Voters. “Whether that goes through the legislature or the ballot is still on the table.”

The coalition of groups spearheading the climate campaign, called the Alliance for Jobs and Clean Energy, expects to make a more formal announcement about its plans before the end of the year. They are looking at a policy that reduces greenhouse gas pollution, but also redirects investment into a suite of programs to promote clean energy, electrifying the transportation sector, clean water, and communities of color. Their plan, similar to one that is under discussion by Democratic leadership, likely will include a tax on carbon.

Before climate advocates can see a carbon tax through, they will have to overcome the internal rifts in the progressive community that sunk the 2016 inititiave, which split environmentalists into two camps.

A small group called Carbon Washington sponsored the defeated initiative, which gained support from the likes of Leonardo DiCaprio and Washington’s Audubon Society. Despite the high-profile backing, many Washington chapters of national environmental groups, like the Sierra Club and Washington Conservation Voters, declined to support the initiative, and activists Van Jones and Naomi Klein publicly campaigned against it. Their claim: The proposal didn’t generate funds to fight climate change, and was developed without the input of communities of color, and as a result, left those communities behind.

What the 732 initiative was designed to do, in essence, was return the money from its carbon tax through cuts in sales and manufacturing taxes and with tax rebates to low-income households. Carbon Washington boasted the plan was revenue-neutral; its founder, an economist who left the state for Utah after the 2016 election, argued the approach would appeal across party lines. But it angered environmental justice advocates and other local activists who favored steering the revenue into environmental initiatives and community reinvestment programs. After polluters and some environmentalists lined up against it, nearly 60 percent of voters opposed the initiative.

Washington environmentalists have regrouped and, while neither Democratic lawmakers nor members of the Alliance have the details hammered out, are gearing up to push a package of climate and energy efficiency measures next year. Having learned some hard lessons from the 2016 election, they might even put another carbon tax initiative on the ballot in 2018.

“If we figured out the exact formula in Washington State, we would have a bill by now,” says Kyle Murphy, executive director of Carbon Washington.

Instead of a revenue-neutral tax like the one proposed in I-732, the state’s Democrats are now considering plans that would generate revenue for climate related projects.

State Senator Reuven Carlyle is a Democrat who is poised to chair of the Senate’s energy and environment committee. While he’s not certain that any legislation will include a carbon tax, he tells Mother Jones that interest in one remains high. There’s “more enthusiasm for a responsible investment package” that would reinvest potential carbon tax revenue, Carlyle says, than in revenue-neutral proposals like the one that split environmentalists last year.

“There’s strong momentum around some element of carbon pricing in order to invest in clean energy,” Carlyle says. “We just need a little time to work in our governor and work in our House and Senate to determine what’s achievable.”

Environmentalists hoping to help the lawmakers draft a plan say that the idea of a revenue-neutral carbon tax is now off the table.

“No, we’re not talking about a revenue-neutral carbon tax, let’s just say that,” says Aiko Schaefer, a coordinator with Front and Centered, a coalition of communities of color that are part of the Alliance. “We’re looking at strategies and approaches and policies that will reduce pollution and greenhouse gas pollution while also investing in solutions.”

There are other challenges to navigate: Democrats have slim majorities in the state legislature, meaning absent bipartisan support, a handful of defections could imperil any bill before it reaches the governor’s desk. Next year’s legislative session year is only 60 days, and climate will have compete with other priorities of the newly empowered Democrats. “There’s a backlog of a destructive trail,” warns Carlyle. “It’s a serious challenge to clean up some of the issues.”

And the same divisions that plagued I-732 could resurface again, as Democrats decide whose input to consider. Last year, Democrats introduced multiple bills to enact a carbon tax in the Republican-controlled chamber. One of them was from then-freshman State Senator Guy Palumbo, who now hopes to produce a bill that could attract colleagues from across the aisle.

“Republican leadership wouldn’t advance the policy over the last 5 years while they were in control,” he explained to Mother Jones. “Now that they are in the minority, the handful of Republican Senators who want to act on climate change are free to vote their conscience.”

Palumbo pointed to the carbon tax bill he introduced in 2017 as a proposal that might garner Republican support. His proposal includes a “Carbon Reduction Fund” to reinvest the tax’s revenue into grants boosting forest health and resiliency to drought and flooding, and as tax rebates for low-income people.

The plan, which carves out exemptions for fossil fuel exporters and some manufacturers, might not satisfy everyone in the environmental community. Palumbo’s bill would start the tax at $15 per ton and eventually rise to $30. Carbon Washington’s 2016 ballot initiative started higher at $25 and would have eventually risen to $100.

If the legislature doesn’t produce a bill, or introduces one that doesn’t go far enough to satisfy environmentalists, Front and Centered and other activists are eyeing a new ballot initiative in 2018. It’s early yet, but there are already signs of another split: Native American tribes who feel the Alliance’s new framework does not go far enough and that their input wasn’t considered warned in September that they may offer a competing carbon tax ballot initiative.

Climate activists argue that that Trump era voters in Washington are more likely to back a ballot measure to fight climate change, especially because its local impact has grown clearer over the past year. In 2017, Seattle’s air quality suffered from the ash and smoke from especially bad Pacific Northwest wildfires. Many parts of the state faced an unprecedented heatwave. “This is really visceral for people right now,” Abraham says.