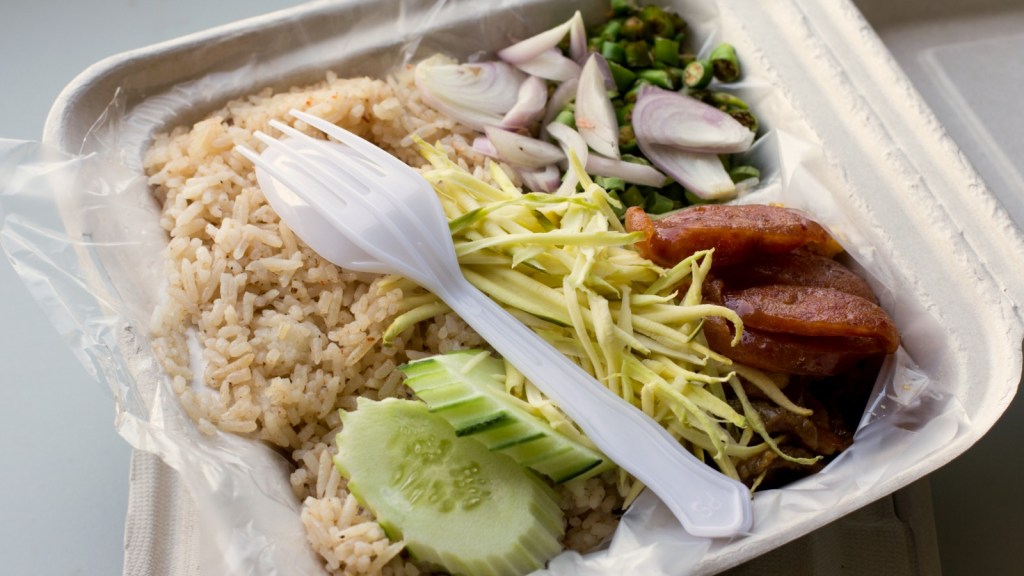 Whether for stabbing salads at our desks or slurping up late-night Thai, plastic cutlery has become a signature side to our growing takeout habit. It’s hard to say exactly how many forks, spoons, and knives Americans throw away, but in 2015 we placed nearly 2 billion delivery orders. If at least half those meals involved single-use utensils, that would mean we’re tossing out billions of utensils each year. They don’t just disappear: A recent study in the San Francisco Bay Area found that food and beverage packaging made up 67 percent of all litter on the streets.

Apart from being an eyesore, disposable cutlery endangers wildlife. A survey by four major environmental groups determined that plastic utensils ranked among the 10 most common trash items found in California — which contributes to a larger problem: The United Nations estimates that the oceans contain more than 8 million tons of plastic. As plastic breaks down, it can be mistaken for food by sea creatures, which can harm them and our seafood dinners.

A few options have surfaced in recent years. In 2010, a company in India started selling edible spoons and forks made from grains. Closer to home, California-based SpudWare’s forks are made from potato starch. But such alternatives, which cost about twice as much as plastic, still require a lot of energy and water to produce, according to Samantha Sommer, who runs a waste-prevention project for Clean Water Action. What’s more, not all major cities compost. And even if biodegradable or compostable utensils make it to a facility, there’s a chance they’ll end up in a landfill, says Robert Reed, a spokesman for the West Coast recycling and compost plant Recology. Depending on what they’re made of, he says, biodegradable utensils might not degrade completely; if they don’t, they could be plucked out of the pile and thrown away.

Perhaps diners should take a page from China, where environmental protesters publicized how the roughly 80 billion pairs of disposable wooden chopsticks produced each year eat up 20 million trees in the process. Greenpeace China launched a BYOC (Bring Your Own Chopsticks) campaign and worked with pop stars to promote reusable chopsticks as a trendy fashion accessory. As a result, disposable chopsticks were banned from use at many venues hosting events at Beijing’s 2008 Olympics.

Metal spoons have not yet graced American celebrity Instagram accounts, but maybe it’s time: Encouraging customers to bring in their own utensils helps businesses cut down costs and waste. A few years ago, Clean Water Action ran a test case with restaurant owner Francisco Hernandez of El Metate in San Francisco. The restaurant staff used to include plastic utensils with every order. Now, sit-down diners get metal forks, and disposables are in a countertop container for to-go customers who need them. Hernandez saved money that year — now he buys just one case of disposable forks each week instead of three — and he decreased his restaurant’s waste by more than 3,600 pounds. The change means El Metate has more to wash, but it’s likely that the water used to run his dishwasher (one gallon for every one-minute cycle) is dwarfed by the amount needed to make those plastic forks.

Still, a sea change might require more research and toothier legislation — something that worked in the fight against plastic bags. A 2013 study found that after San Jose, California, enacted a bag ban, there was nearly 90 percent less plastic in the city’s storm drains and almost 60 percent less in its streets than there had been before. Data like that helped California finalize a statewide ban — over the strenuous lobbying of plastics manufacturers — in 2016. Such legislation appears to be catching on: Chicago, Seattle, and Austin, Texas, have also enacted bag bans, and between 2015 and 2016, lawmakers proposed at least 77 state-level plastic bag bills. Given that success, here’s an idea: Charge a small fee for disposable utensils to help nudge consumers to make a habit out of carrying their own forks. Prettier streets, healthier oceans, and cheaper takeout? Sold.