Just a reminder: The world is perilously close to annihilation! 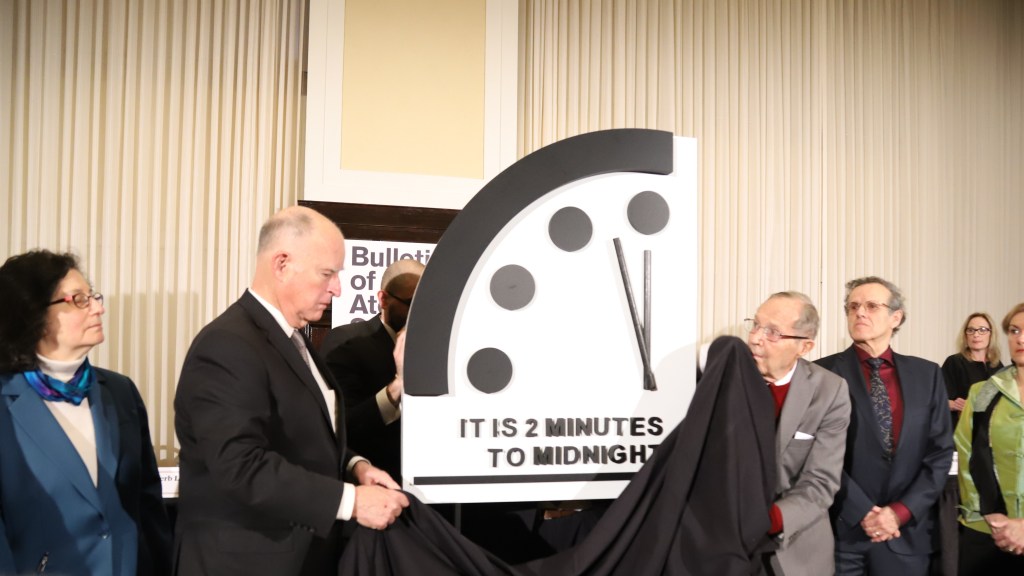 Just a reminder: The world is perilously close to annihilation!

The world’s most eminent predictors of doom, the Bulletin of Atomic Scientists, gathered Thursday to announce just how close humanity is from irreversible collapse. The answer: pretty damn close.

The Doomsday Clock is two minutes from midnight (read “the end of everything”), thanks largely to climate change and the threat of nuclear annihilation. That’s exactly where it was last year, when the collection of scientists set it at 11:58, the nearest it’s been to midnight since 1953 when the Soviet Union and the United States were testing nukes.

The current state of climate and political doom is starting to feel familiar. The Bulletin’s name for it is the “new abnormal.”

“The longer world leaders and citizens carelessly inhabit this new and abnormal reality, the more likely the world is to experience catastrophe of historic proportions,” said Robert Rosner, a professor of astronomy and physics at the University of Chicago, during a press conference announcing the Doomsday Clock’s settings in Washington, D.C. The most serious global threats — climate change, nuclear, and information warfare — are all being denied or ignored, Rosner said.

Since 1947 when the Cold War was getting underway, the Doomsday Clock has been used to bring awareness to the biggest existential threats. The first team behind the iconic clock came from The Manhattan Project, the scientists and engineers who produced the first atomic bomb. For most of the clock’s history, nuclear war has been the largest threat (it started at seven minutes to midnight). Yet since 2007, climate change has become a growing risk, nudging the clock’s minute hand closer to Doomsday.

The scientists noted that there’s another way to measure of our proximity towards doom: carbon dioxide levels. “Every year that we continue to add carbon dioxide to the atmosphere, irreversibly ratchets up the level of human suffering and ecosystem destruction that will occur due to global climate change,” said Susan Solomon, an atmospheric scientist and professor at MIT, at the announcement.

After years of remaining stable, global emission levels rose in 2017 and reached an all-time high in 2018. Part of the reason is that the United States, China, and other big polluters have increased their emissions, which Solomon called an “act of gross negligence.”

That the clock didn’t tick this year is a sign that we’ve made no progress on avoiding impending disaster. “The new abnormal climate that we already have is extremely dangerous,” said Solomon. “And we’ve moved onto a path that will make our future much more dangerous still.”