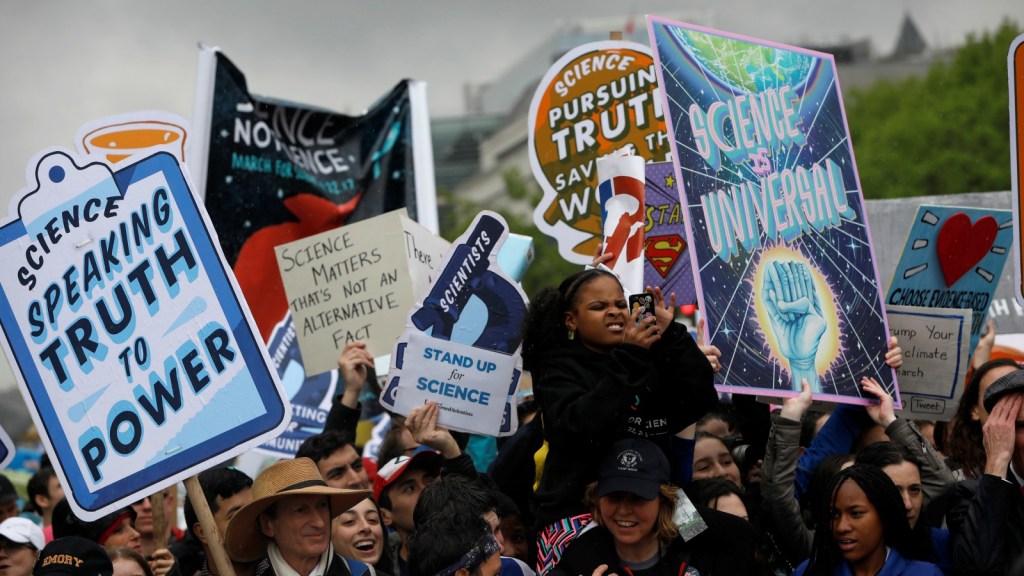 When protesters descended on Washington, D.C., last month for the March for Science, they carried signs that were straight to the point: “What do we want? Evidence-based science. When do we want it? After Peer Review.” And unlike the administration they were protesting, organizers were careful to apply scientific rigor to how they calculated the number of people who participated in the march.

As a result, it took organizers an unusually long time — three weeks — to come up with their estimate for how many people took part in the April 22 marches in Washington and 600 other cities worldwide. In a blog post published Monday, organizers approximated that nearly 1.1 million people had protested around the world, with the largest marches taking place in D.C. (100,000), San Francisco (50,000), Los Angeles (50,000), Chicago (60,000), and Boston (70,000).

Their patience was a marked contrast to how President Donald Trump handled his inauguration. Trump spent his first weekend as president insisting that far more people attended his swearing-in than were actually there and attacking anyone who disagreed. Trump told the CIA that Saturday that he drew “a million-and-a-half people.” In his first address to reporters as White House press secretary, Sean Spicer angrily claimed, “That was the largest audience to witness an inauguration, period.” Photographs proved these assertions to be untrue, but the White House didn’t budge. Trump aide Kellyanne Conway even coined the term “alternative facts” — a phrase widely derided by the pro-science marchers — when she was defending the White House’s claim that Trump drew a larger crowd than President Barack Obama had in 2009.

March for Science organizers decided to take their time tabulating their crowds after volunteer Kate Gage suggested that they should “science the shit out of the numbers” — which Gage said was meant neither as a reference to Trump’s crowds debate nor to Matt Damon’s character in the movie The Martian. “We really wanted to emphasize that it was a march about science and data and evidence,” explained Gage, a former policy adviser in the White House’s International Science and Technology office during the Obama administration. Scientific rigor was critical, she said, because the march “was organized by scientists, in a way and a scale we haven’t seen before.”

Crowd counting is an inexact science, and the volunteers who organized the marches acknowledge the shortcomings of their methodological choices. The D.C. march was particularly challenging, said Kishore Hari, the D.C. march coordinator (and a cohost of Mother Jones’ Inquiring Minds podcast), because the National Park Service doesn’t release crowd estimates and the rainy weather that day prevented the use of satellite imagery. In the end, comparing crowd density to the area’s known capacity, they estimated 100,000 attendees.

While the D.C. march count had its limitations, the other marches used a variety of methods. Most marches used hand counts, but for larger, moving groups, hand counts can be prone to error, so organizers had to rely on other methods. Rufus Cochran, an engineer and cochair of the Indianapolis march, spent a few nights reading about different methodologies. Here’s the approach they settled on in Indianapolis, as described in a blog post on the March for Science’s website:

At the beginning of their event, pictures of the square were taken with reference landmarks visible. Using this and other pictures, the organizers estimated a fairly consistent density across the square. The organizers then drew an outline of the area using MapChecking.com and combined that with state crowd density still data from Professor Keith Still, a crowd estimation scientist. They settled on a likely density of two and three people per square meter resulting in an attendance calculation of just under 10,000. Given that more people arrived after this picture was taken and there were people at the periphery beyond the borders of area, this estimate is likely conservative.

“Researching and building on existing technologies is very important,” Cochran told me. “A lot of the methodology is people making best-educated guesses.” He said his aim was to use “a methodology that is transparent and repeatable.”

Keith Still, a crowd size scientist who provided estimates for the Inauguration and Women’s March, says that the methods used by the March for Science organizers were acceptable. “Crowd counting has been around for a long time, we don’t use a static process as it is fraught with inaccuracies,” he said in an email, noting that some methods for determining density are crude and highly variable. “Without images, it would be difficult to assess the accuracy of the crowd count in the March for Science, but the information on the blog is reasonable. By that I mean, the figures are typical of this sort of event (and not over inflated).”