A herd of dragons, followed by a brass band, and a float full of Star Wars characters rolled down St. Charles Avenue in New Orleans earlier this week, pelting onlookers with shiny beads. When it was over, misthrown necklaces dangled from tree branches and pooled in streetcar tracks.

It’s a scene that played out dozens of times across greater New Orleans over recent weeks. And boy does it make a mess. The Mardi Gras season came to a close on Tuesday, but beads remain scattered everywhere, clogging the city’s sewers. Last year, New Orleans vacuumed 93,000 pounds of plastic beads out of its storm drains.

Someday, historians may look back on our current fossil-fueled plastic era — the geological layer peppered with K-cups, water bottles, and straws — as one particularly bad Fat Tuesday binge.

But at Louisiana State University in Baton Rouge, molecular biologist Naohiro Kato is working to fix the local version of the plastic problem: Kato has figured out how to fashion biodegradable beads and doubloons out of algae. 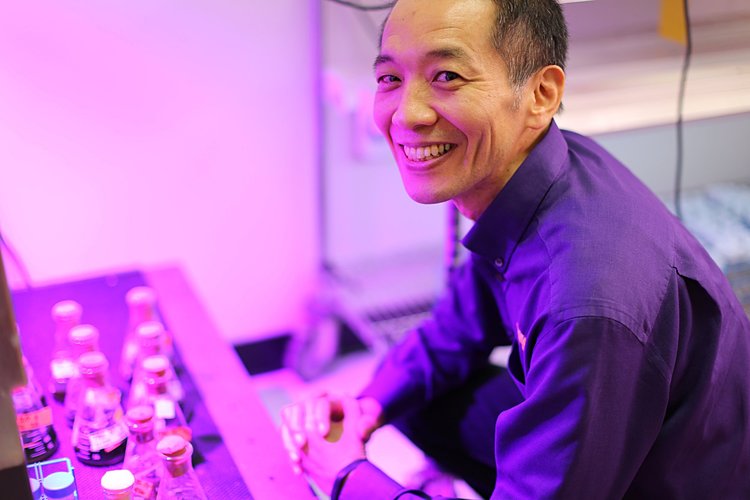 Kato isn’t exactly into plastics — his research is all about finding medicines in algae. But back in 2013, a student forgot to put a test tube of algae back in a freezer. The next morning, they found a layer of oil had separated from the warm scum and floated to the top of the tube. You need oil, usually pumped out of the ground, to make plastic beads. But the algae in the test tube had pumped this oil out of the air — weaving together carbon-dioxide and water to make the hydrocarbons.

Starting with algae grown in a kiddie pool, Kato then managed to make a few doubloons and beads. 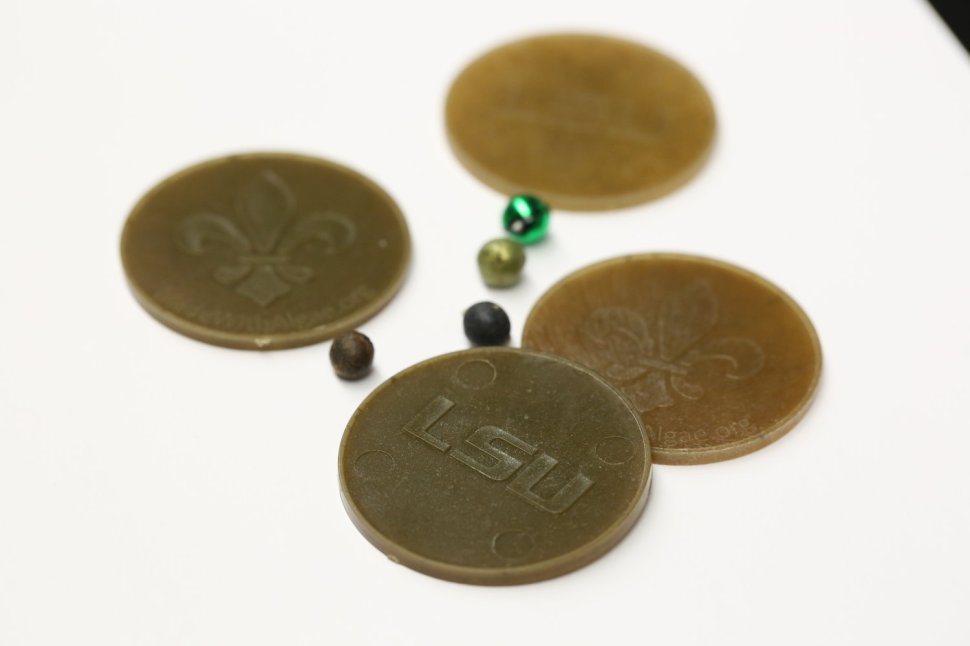 Plastic beads and doubloons made from algae oil will break down over time, rather than clogging sewers for decades. Paige Jarreau, LSU.

This is just one example of an ongoing revolution to replace petroleum-based chemistry with biology. In the 1950s, scientists broke open the secrets of polymers and, in a frenzy of discovery, figured out how to turn oil into hundreds of different kinds of plastics. Plastics to insulate wires, package food, grease engines, form medical devices, and of course, to shape into a trillion colorful party novelties that drunk tourists would drop in the French Quarter. Now scientists have begun unlocking a new treasure of secrets — working with living cells this time, rather than organic chemistry.

“How big of a deal could bioplastics be? Yeah, I think it could be huge,” said John Cumbers, the founder of SynBioBeta, a network of researchers and inventors involved in this new frenzy of discovery.

Cumbers noted that one startup, Mango Materials, has been capturing methane (a powerful greenhouse gas) and feeding it to bacteria. The bacteria then transform it into bio-polymer molecules, which can be made into plastics.

This isn’t just an exciting frontier for startups. Big companies have already demonstrated that biomaterials make sense. In the 1990s, DuPont began a moonshot effort to get yeast to build 1-3 propanediol, a molecule that’s incredibly difficult to make from petroleum. They succeeded, and soon it was replacing petro-chemicals in cosmetics, soaps, and fabrics. It won a presidential green chemistry award in 2003. Most of this propanediol goes to make a fabric called Sorona, which is woven into denim, carpets, wrinkle-free suits, and underwear. Compared to similar textiles, Sonora produces 60 percent less greenhouse gases over its life cycle, according to DuPont.

This biomaterial performs better and is cheaper than the alternatives, and so “we’ve been growing like gangbusters,” said Mike Saltzberg, who directs DuPont’s biomaterials efforts.

But that’s not always the case. The more environmentally responsible option is often more expensive. “When people say, ‘I’m not just looking at performance and cost, I’m also looking at the environment,’ that really gives bioproducts the advantage,” Saltzberg said.

Take Kato’s bio-beads. Right now they’d cost about a dollar per necklace to mass produce, which is a lot more that the competition (a dollar can buy you a dozen). But if you captured the byproducts of the algal supplements he’s working on, you might be able to make it much more cheaply. For example, you can sell algal fucoxanthin, a compound with potential medical properties for $50,000 a pound. And after you take out the fucoxanthin, you still have 98 percent of the algae you started with.

‘Step the f#$@ off’: Dianne Feinstein gets the SNL treatment