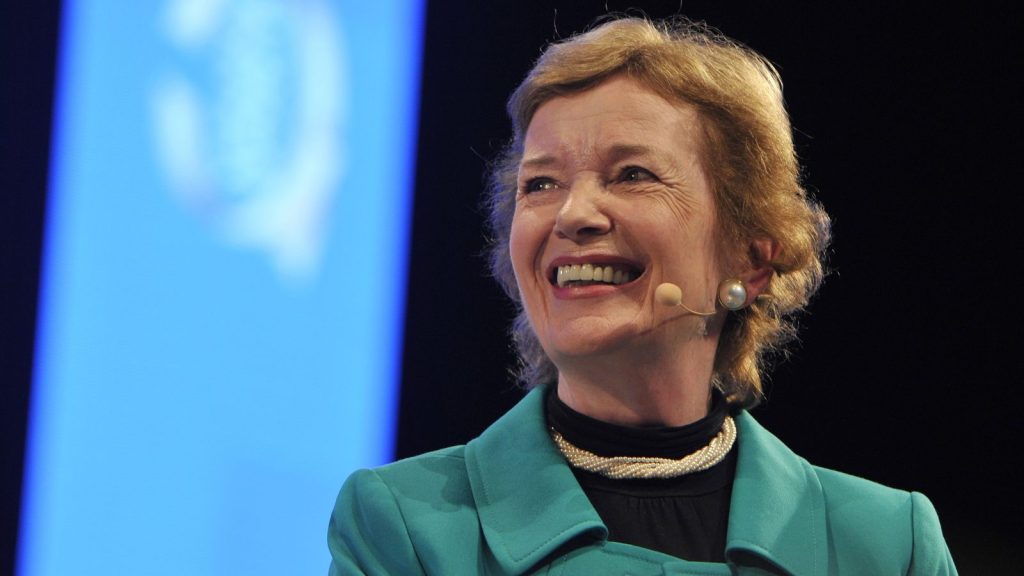 Former President of Ireland Mary Robinson is a bonafide international environmental badass. Not only was she the first female president of her country, but she has also made climate justice the focus of her foundation.

Grist was invited to listen in on a taping of her podcast, Mothers of Invention, co-hosted by comedian Maeve Higgins. Their banter, along with stories from guests who brought a feminist approach to climate solutions around the world, was exactly the shot of espresso I needed for a midweek morning. Robinson, who served as the United Nations High Commissioner on Human Rights, is not completely free of controversy, but she is relentless in her work on climate.

The podcast is just the most recent of Robinson’s ongoing efforts to ensure that women and others who disproportionately bear the burdens of what she calls, the “injustice of climate change” are heard. Now in its second season, the podcast has already taken on “ghosting the planet” and “the white man [who] stole the weather.”

Before a recent taping, Robinson sat down with Grist’s Justine Calma to talk feminism, the Green New Deal, and her own carbon footprint.

This conversation has been edited for clarity and length.

Q. Are you feeling a shift globally in how we’re prioritizing climate?

A. Climate change has really come up on the agenda. It’s partly because of young people and even school children saying, ‘We want to have a future. You’re not protecting us.’ That’s a very powerful message. When I talked about the injustice [of climate change] — focusing on small island states, indigenous peoples, poor vulnerable countries, and even poor communities in developed countries — a lot of people sort of said, ‘Well that’s not me.’ But ‘children’ [is a group that involves] everyone.

Q.In a recent episode of Mothers of Invention, you talked about the Green New Deal. From a sort of outside perspective, what would that mean for the world?

A. I think it’s really important that the U.S. is coming back into the climate space. A new imagining of the world we want to see, that’s what the Green New Deal is about. That’s what having a healthier world is about. And it’s an exciting world. I think that’s what will motivate young people is to have what I call a moonshot approach to moving forward. In 1961 John F. Kennedy said he wanted to put a man on the moon. When he said that, it was a totally impossible idea. In eight years, it was done, and the average age at NASA at the time was 26. So those young people heard him when they were 18 and they did it. We need that approach, not business as usual, or gradual step by step — but actually the Green New Deal, the radical solutions, the moving forward rapidly, because the world can’t wait.

Q.Why have you always put women at the forefront of your work?

A. Growing up in the west of Ireland I had four brothers. So from the beginning, I had to assert gender, human rights and use my elbows. My parents kept telling me that I had the same opportunities [as a man], but the rest of Irish society wasn’t telling me that. In Ireland when I was growing up, women were second-class and our place was in the home.

Climate change is a manmade problem and requires a feminist solution. ‘Manmade’ is a generic term, it includes women. And a feminist solution definitely includes men. So what we want to do is put gender equality at the center of how we address the climate issue. We need men to recognize that many many mistakes have been made. We’re not getting out of fossil fuels quickly enough. We need to change much more rapidly.

Q.There’s been some scrutiny of Rep. Alexandria Ocasio-Cortez, about plane travel all these things that are part of living in this society we have. How do you think about your own carbon footprint?

A. I think that’s a very fair, very thoughtful question. We all have to think about it. Unfortunately, I travel too much because I want to be persuading. And you have to be there to persuade.

I think we need to do three things, all of us. The first thing is everybody has to take the climate change threat personally in their lives. And that means you’ve got to do something you wouldn’t have done before. So in my case, I gave up meat. I’m now a pescatarian. Others go further they become vegetarian, vegan, etc. — but I’m stopping there because I’m elderly and I do love lamb from the west of Ireland, so it’s cost me.

Having done that, you’ve got to get angry with those with more responsibility who are not doing enough: Governments, business, especially fossil fuel business, agriculture, transportation, communities, everybody that should be doing much more.

And then the third thing, and it’s probably the most important thing at this stage, is imagine the world we want to get to. Get excited about the world we’re going to have that will be so much more healthy, that will be fossil fuel-free, that has to be a more equal world.