'Never give up': Greta Thunberg takes climate strike to the White House 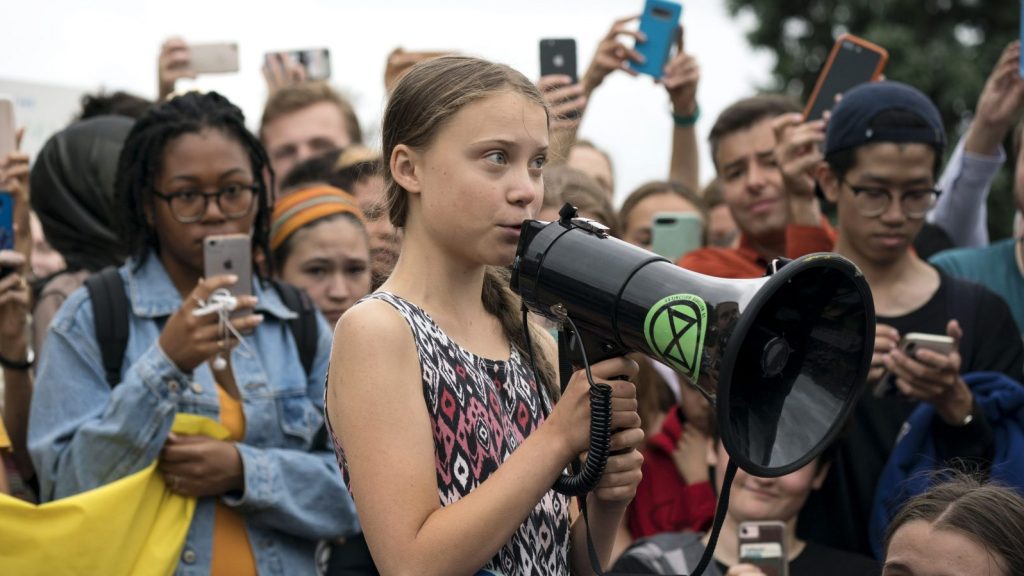 ‘Never give up’: Greta Thunberg takes climate strike to the White House

WASHINGTON — Greta Thunberg, the famous 16-year-old Swedish environmental activist who kicked off a global movement of students leaving school to demand action on the climate crisis, joined other youth activists at a rally outside the White House on Friday.

A few hundred people, mostly teenagers and young children, gathered on the Ellipse south of the White House carrying signs that read “I want you to panic!” and “Why are we studying for a future we won’t have?” They chanted, “This is a crisis, act like it!” and “No more coal, no more oil, keep that carbon in the soil.” When someone mentioned President Donald Trump, the crowd booed and yelled “Shame!”

After marching a short distance toward the White House, numerous protesters lay down on the ground for an 11-minute “die-in” ― what one speaker called a “mass extinction.” The protest represented the 11 years that scientists say world governments have to rein in greenhouse gas emissions to stave off potentially cataclysmic climate change.

“We are striking today to save tomorrow!” Nadia Nazar, the 17-year-old co-founder of the Zero Hour movement.

Trump has a long history of denying the threat of climate change, often arguing that spells of cold weather somehow disprove the long-term warming trend. His administration has taken an ax to a slew of environmental regulations meant to curb greenhouse gas emissions — all part of its so-called “energy dominance” agenda. Thunberg told CBS in an interview last month that she wouldn’t “waste time” talking to Trump if given the opportunity.

Thunberg spent most of the rally surrounded by peers and a throng of reporters wielding cameras. She quietly joined a series of chants, and when finally given a chance to speak, simply expressed her gratitude for such a large turnout.

“This is very overwhelming,” she said. “Never give up. We will continue.”

Jeff Hunt, a 28-year-old resident of Washington, D.C., was among those participating in Friday’s rally. He carried a sign that read, “When I grow up I want to be Greta Thunberg,” and told HuffPost that like Thunberg, he thinks Trump is a lost cause.

Instead, Hunt hopes the event helps sends a message to the rest of the country and world that we are nearing a dangerous tipping point and it is time to make radical, economy-wide changes that will protect future generations.

“I have high hopes that the generation beneath me will be much more plugged in,” he said. “I feel like my generation has kind of dropped the ball, if you look at our voting habits and our dedication to actually change our lifestyle.”

Thunberg rose to fame last year when she went on strike from school following Sweden’s hottest summer on record. For weeks, she sat outside her country’s Parliament, holding a “School strike for climate” sign and demanding that local politicians enact policies in line with the goals of the 2015 Paris Agreement on climate action.

School strikes quickly popped up in other countries. And in March, an estimated 1.4 million young people in more than 100 countries mobilized for a global strike, part of what has come to be known as the Fridays for Future movement. Tuesday’s gathering outside the White House comes ahead of a weeklong global strike slated for the week of September 20.

Thunberg traveled to the United States by sailboat to reduce her carbon footprint. While in the United States, she’s expected to testify before Congress, speak outside the U.S. Supreme Court alongside youth suing the government over climate change, and attend the United Nations Climate Action Summit in New York.