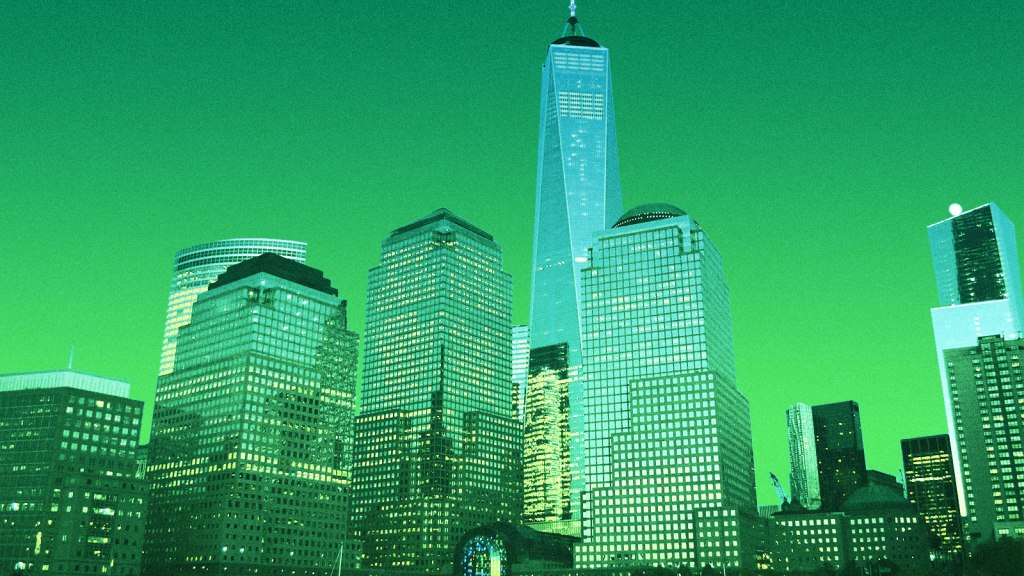 As the rest of the country continues to go back and forth over the possibility of a nationwide Green New Deal, New York City is forging ahead with its own version. The Climate Mobilization Act passed the city council on Thursday with a vote of 45 to 2 amidst cheers and applause from those inside the chambers.

The bundle of 10 bills will keep the city in line with emissions reduction targets set by the Paris Climate Agreement. Mayor Bill de Blasio is expected to sign the bill into law in the coming weeks.*

“This package of bills will be the single largest carbon reduction effort in any city, anywhere, not just New York City, that has been put forward,” said Committee for Environmental Protection Chair Costa Constantinides in a committee hearing the morning of the vote. “By our calculations, it will result in the equivalent of taking more than one million cars off the road by 2030.” Proponents of the legislation say it will have a significant impact on air quality in the city, which has higher than the national average asthma rates and create thousands of new middle-class jobs for the city.

Making big changes to meet climate goals in New York City is tricky because so much of the city’s day-to-day operation–from public transportation to water, even its ability to ban plastic bags — is controlled by the state government. By focusing largely on local building standards, the city has been able to carve out green legislation within its jurisdiction.

The act’s pièce de résistance is a bill that requires many of city’s buildings to significantly slash their carbon emissions starting in 2024, reducing overall emissions by 40 percent by 2030. Buildings are responsible for almost 70 percent of New York City’s greenhouse gas emissions, according to a 2017 estimate. The Mayor’s Office of Sustainability estimates upgrades needed to meet the act’s emissions caps would cost building owners around $4 billion, according to the New York Times. The measure was vehemently opposed by the real estate industry, which argued the bill is costly, unrealistic and puts an unfair burden on the owners of buildings not exempted from the law.

New York’s powerful real estate lobby has been fighting energy-efficient building legislation as far back as 2009 when then-Mayor Bloomberg proposed a similar rule. So in a city where the real estate industry so often gets its way, today’s vote really stands out.

But the times are a’changing, and even skeptical New Yorkers (and potential 2020 presidential candidates) like Mayor Bill de Blasio, who recently called the act “very aggressive,” have come around in support of the measure. “Climate change poses an existential threat to New York City, and making buildings more sustainable and efficient is a key part of the solution,” said de Blasio’s Office of Sustainability via email. “Protecting New Yorkers from climate change is not optional.”

What does the act do?

The act consists of 10 bills which aim to reduce the city’s greenhouse gas emissions in a myriad of ways. Some of the standouts:

But the meatiest (veggiest?) bill of the bunch is unofficially known as the “Dirty Buildings Bill.” It requires around 50,000 of the city’s buildings to cut emissions by 40 percent by 2030 and 80 percent by 2050 by installing new windows, insulation and other retrofits to become more energy efficient. The legislation targets buildings over 25,000 square feet, which make up just 2 percent of the city’s real estate but account for about half of all building emissions. If landlords fail to meet targets, they will be forced to pay a fine of up to millions of dollars per year. Some of the guilty buildings will include Trump Tower, the Empire State Building, One World Trade Center, and 15 Central Park West.

Not every edifice will have to scramble to make energy-efficient updates. Non-profits, hospitals, religious sites, rent-controlled housing and residential buildings of four stories or less are exempted from the bill in various ways. The legislation also creates a low-interest energy loan program to help building owners get funding to make these green improvements. Councilmember Constantinides said that they designed the loans so that, most loan recipients should see a net gain after all is said and done after factoring in the cost savings from improved energy efficiency.

Who stands to benefit?

Well, the earth, naturally. But people-wise, NYC is hoping the construction work involved in the building overhaul bill will benefit the city’s shrinking middle class while simultaneously improving public health.

“By 2030, this bill will create 26,700 green jobs, and will prevent 43 premature deaths and 107 Emergency Room visits annually by 2030,” a spokesperson for the Mayor’s Office of Sustainability wrote in an email to Grist.

A study by New York Working Families and the non-profit ALIGN NY found that the new laws would create 23,627 “direct construction jobs” implementing the retrofits, and 16,995 “indirect jobs” like building operation and maintenance jobs, manufacturing and professional services per year until 2030.

“We wanted to ensure legislation that tackled both climate change and inequality,” said Peter Sikora, the climate and inequality campaigns director with grassroots organization New York Communities for Change. “You can’t fight climate change on the backs of poor people of color, that’s not right.”

The bill looking at phasing out oil- and gas-fueled power plants could have a significant impact on air quality neighborhoods where existing plants are located. Many of the city’s power plants are in low-income areas, where local residents suffer from pollution.

Who put up a fight?

Hospitals and other healthcare facilities are among the biggest energy users among New York City buildings over 25,000 feet. Before the act passed, hospital representatives were seeking a total exemption from the “Dirty Buildings Bill” rules — but they were ultimately denied.

Hospitals are among the biggest energy users among buildings over 25,000 feet. . “Hospitals, in all fairness, are unusual because they’re 24-hour operations and have federal rules” such as replacing their indoor air a certain number of times per day, Sikora said. Still, “It’s ironic that healthcare institutions were lobbying against anti-pollution requirements.”

Although hospitals didn’t receive the full exemption from the new laws, they are being held to the lowest standard allowed by the “Dirty Buildings” bill, meaning they’ll still have to cut emissions, but not on the same timeline or to the same extent as other facilities.

Back to the power plant bill: Once the feasibility study is completed, what will be the next steps to start shutting down these pollution-spewing energy generators? There aren’t any guarantees or safeguards built into the legislation to say how, or when, the city council will use the study’s findings to begin divesting from the dirty fuel or shutting down power plants impacting lower-income communities.“The City Council will continue its work to move away from fossil fuel and into more renewable energy sources,” a spokesperson for New York City Council Speaker Corey Johnson told Grist.

Sikora agreed that the city’s Green New Deal plans are fuzzy for now. “There are loads of details and implementation issues and administrative actions and financing mechanisms that need to take place moving forward,” he said.

The fate of the Williams Pipeline also remains to be seen. Even though the Climate Mobilization Act includes a resolution condemning the pipeline, it’s still largely up to Governor Cuomo and the Department of Environmental Conservation, which has until May 16 to issue a key water certification that’d allow construction to begin this year. Even as environmental advocates celebrated New York’s Green New Deal vote, some participants peeled off for a march in protest of the fracked gas pipeline.

*This story previously stated that New York City Mayor Bill De Blasio signed the Climate Mobilization Act on Thursday. According to his spokesperson, he has not yet signed it, but will in the near future.