Can New York have a Green New Deal and a new fracked gas pipeline? 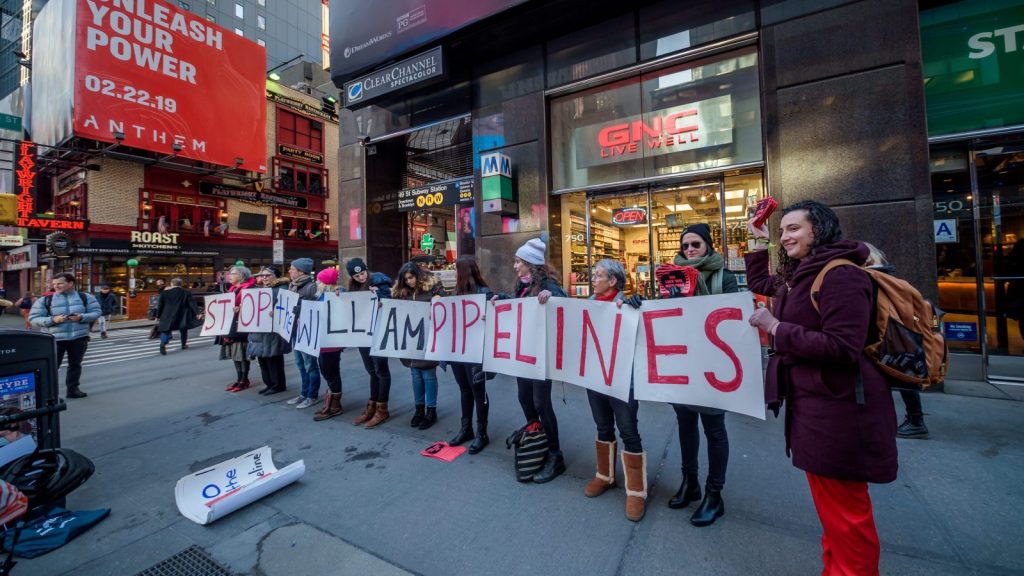 deal or no deal

Can New York have a Green New Deal and a new fracked gas pipeline?

New York Governor Andrew Cuomo’s Deputy Secretary for Energy and Environment Dale Bryk faced a riled up crowd Wednesday night in New York City. Nearly two dozen local advocacy groups organized an accountability forum on the state’s own version of a Green New Deal, calling on the governor to get even tougher on fossil fuels. But for all the governors’ lofty goals on climate, the spirited (to say the least) forum brought to the forefront tensions brewing over a proposed fracked gas pipeline in the Empire State.

“Cuomo! Stop the Williams Pipeline!” hundreds in the crowd chanted as Bryk tried to answer questions from a panel of event organizers, which included 350.org, Democratic Socialists of America, Sunrise Movement, and others.

The attendees were referring to the hot topic of the night: a proposed 37-mile pipeline by Oklahoma-based energy company Williams which would bring up to an additional 400 million cubic feet a day of fracked natural gas from Pennsylvania to New York City. The project would allow utility company National Grid to increase its gas capacity by 14 percent in the region. National Grid currently serves 1.8 million customers across Queens, Brooklyn, Staten Island, and Long Island.

Proponents of the pipeline say its construction is necessary to meet a growing demand for natural gas, and that it will facilitate a city-mandated transition away from using dirtier oil for heating. The pipeline is part of the Williams Company’s Northeast Supply Enhancement Project, which it says will displace 13 million barrels of heating oil and reduce carbon emissions equivalent to taking 500,000 cars off the road.

Most of those attending the forum on Wednesday expressed opposition to the proposed pipeline. Some questioned Bryk, who attended on behalf of Cuomo, on how the governor could simultaneously call for a transition to 100 percent clean energy by 2040 and also allow a new fracked gas pipeline to be built in the state. Panelists also said the project would essentially lock the state into continued fossil fuel use.

Earlier this week, prominent environmental advocacy organization 350.org released an analysis of government and company data on the Williams fracked gas pipeline. It found that much of the city’s heating systems have already moved away from running on the heavy oils that must be phased out. The report also predicts a decrease in demand for natural gas as energy efficiency improves.

The governor banned fracking in New York back in 2014, pointing to potential threats the practice poses to residents’ health. Mike Harrington, assistant director of the New School’s Tishman Environment and Design Center, attended the forum and said he was keen to know how the state was considering environmental equity in its initiatives. “Pipelines often have safety issues along that whole pipeline,” said Harrington. “We should be looking at ways to move away from that and not increase capacity to bring [oil and gas].”

In the past, Cuomo opposed the construction of two other pipelines, the Constitution Pipeline and the Northern Access Pipeline. But when Bryk was asked at the forum whether the governor will work to stop construction of the Williams pipeline, she didn’t give the crowd a direct answer. Instead, she repeatedly shifted the conversation to addressing the demand for natural gas. “We have to get to a place where we are not customers,” said Bryk. “That is the strongest tool we have to say no to everything that is fossil fuel.”

Cuomo’s ties to the Williams Company have recently come under scrutiny. WNYC reported that Cuomo hired a lobbyist for Williams to lead his re-election campaign, and may also have indirectly received financial backing from Williams via a $100,000 donation made by the company to a Democratic Party governors’ organization that supports Cuomo.

The Federal Energy Regulation Commission gave the Williams Pipeline the green light in December and the project is now under review by the New York State Department of Environmental Conservation, which must issue permits in order for construction to begin. In response to an inquiry from Grist, the Department of Environmental Conservation emailed this statement: “DEC will continue to rigorously evaluate these applications [for the proposed Northeast Supply Enhancement Project] to protect public health and the environment and to ensure all applicable standards are met.”

Back at the forum, New Yorkers of all ages were eager for more details — both on the Williams pipeline and Cuomo’s environmental policy plan for the state. Seventeen-year-old high school senior Johanna Neggie said she had been excited to learn more about the governor’s proposed Green New Deal, but that she left the event without hearing the details she was hoping for.

But Neggie remained optimistic based on the passionate response of the crowd at the forum to the proposed pipeline. “[Bryk] can go back to [Cuomo] and say how much the crowd was really, really was invested in this issue,” she said.