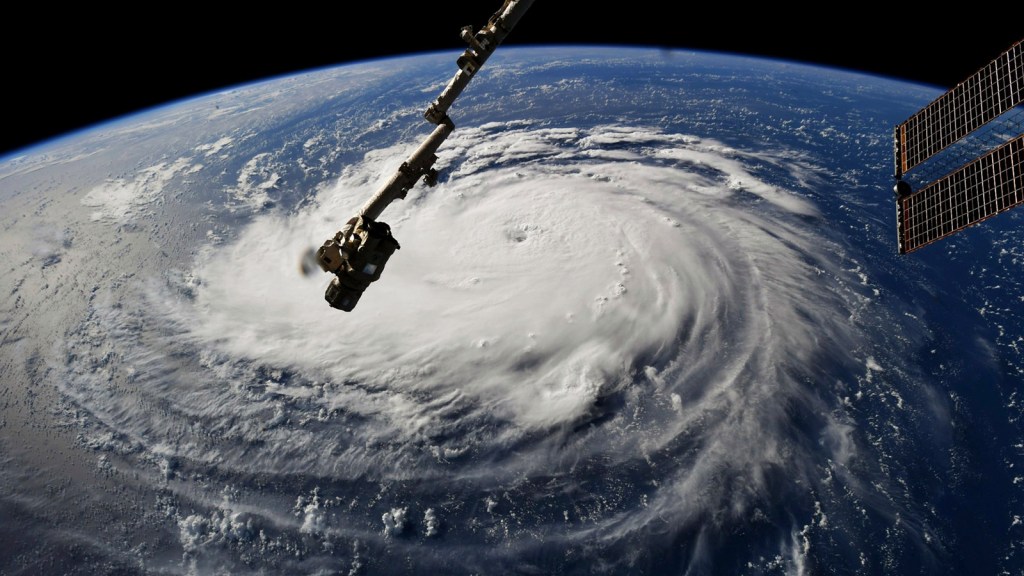 Hurricane Florence is heading straight for the Carolinas, on course to slam into a region that hasn’t seen anything like it in a generation.

Florence is already one of the worst hurricanes ever to threaten the East Coast, and there’s nearly unanimous consensus among the most reliable weather models that the storm will grow larger and more fierce before it hits land. When it arrives in North Carolina on Thursday, it could be about the same size as North Carolina.

On Monday, South Carolina Governor Henry McMaster ordered the complete evacuation of the state’s coastline, home to more than a million people, to prepare for what’s shaping up to be a historic storm. Large-scale evacuations have also been ordered in eastern North Carolina and southeast Virginia, home to a combined 3 million people, where states of emergency are already in effect. President Donald Trump cancelled a campaign rally in Mississippi and tweeted several messages urging people to prepare.

As of Tuesday evening, Florence had sustained winds of 140 mph — a strong Category 4. But it could soon get more powerful. On its current path, Florence will traverse the bathwater-warm Gulf Stream — source of rocket fuel for hurricanes — and likely strengthen further, perhaps reaching Category 5. That could turn Florence into one of the most powerful hurricanes in U.S. history.

Since 1851, only three other hurricanes have targeted the Carolinas at Category-4 strength or stronger, with Hugo in 1989 the most recent. In the generation since Hugo hit, millions more people have moved to the southeast coast — greatly increasing the region’s vulnerability. Winds as strong as Florence’s will produce “catastrophic” damage, according to the National Hurricane Center’s explanation of the Saffir-Simpson Wind Scale. “Most of the area will be uninhabitable for weeks or months.”

But the biggest risk to lives and infrastructure will come from the water. More than 80 percent of hurricane-related deaths are due to flooding, either by rising coastal waters or heavy rainfall. Florence will pack both.

At the coast, Florence could bring 15 to 20 feet of storm surge, enough to eclipse the East Coast record and overwhelm fragile and densely-populated barrier islands.

After making landfall, the most reliable weather models show Florence stalling over the Carolinas and Virginia for up to four days, similar to what happened in Texas with Hurricane Harvey last year. The deluge could extend for hundreds of miles inland.

Florence’s slow movement after landfall is expected to bring 20 to 40 inches of rain to inland parts of North Carolina and Virginia, with floodwaters enhanced by the rainfall-squeezing effect of the Appalachian Mountains. If that forecast holds, North Carolina’s state hurricane rainfall record of 27 inches set during Floyd in 1999 could be shattered.

All that rain would fall on already wet soil, worsening the potential deluge. Over the past 60 days, parts of the region have received nearly double the amount of rain seen in a typical summer.

In short, Florence is a recipe for an abject flooding disaster. Much of North Carolina and Virginia could be dealing with its worst floods in history. It will take a week or more for rainwater to drain from the hills and mountains, channeling all that rainfall into rivers and streams — scouring away homes and highways in floodplains along the way.

There’s good reason to believe that a storm like Florence is made more likely by the warming atmosphere. Warmer air can hold more water vapor, making rainfall in hurricanes more intense. At peak hurricane season, ocean temperatures in Florence’s path would probably be strong enough to support its current intensity even without global warming, but the extra degree or two has made the storm’s rapid intensification that much more likely. And the foot or so of sea level rise that’s already occurred — no matter what the North Carolina legislature says — will obviously worsen coastal flooding. The latest research also suggests that intense hurricanes will migrate further north as the climate warms this century.

As Miami-based meteorologist John Morales recently wrote on Twitter, “There’s more strong hurricanes, and they ain’t where they used to be.”

For a region unaccustomed to a storm like Florence, its impact will arrive as a harbinger of a warmer — and more dangerous — future.