The western tail of Lake Erie brims with life. Warm, shallow waters along the Ohio-Michigan border teem with bass, bluegill, and walleye, sustaining a billion-dollar fishing industry. Millions of people from Cleveland to Detroit draw their drinking water from this nook of the lake. Yet every summer, nasty blooms of toxic algae put the entire system at risk.

Scummy blankets of blue-green algae, or cyanobacteria, have appeared at alarming scales since the early 2000s, killing plants and fish and straining water treatment facilities. Four years ago, algal blooms were so bad that residents of Toledo were told not to drink or use tap water for three days. Scientists say they know the primary source of the blooms: phosphorus and nitrogen that wash off farms in northwest Ohio and flow into the lake. What’s less clear is how policymakers and farmers will act to stem the nutrient pollution.

A high-profile effort by the state’s Republican governor, John Kasich, to tackle toxic algae is in limbo after months of contentious meetings, political infighting, and strong resistance from the state’s agricultural interests. The delays mean that his successor, Mike DeWine, another Republican, will be responsible for carrying out or discarding Kasich’s vision.

Kasich is pushing to declare eight watersheds in northwest Ohio as “distressed,” a maneuver that would enable regulators to adopt rules for curtailing agricultural runoff across some 7,000 farms. This summer, he issued an executive order that tasks a state commission with approving the “distressed” designations. But that commission recently decided to put off a decision until February — after Kasich leaves office.

If upheld, the order would start by requiring farmers to lay out detailed strategies for applying chemical fertilizers and spreading manure. Water quality experts say these “nutrient management plans” are a practical first step toward jumpstarting conservation efforts across all of the region’s farms and replacing today’s scattered patchwork of initiatives.

“All of the large-scale watershed models suggest that you’re going to have to have everyone in the watershed changing something about their (fertilizer) management,” says Laura Johnson, who directs the National Center for Water Quality Research at Heidelberg University in Tiffin, Ohio.

The problem, Johnson says, is not that a few renegade soybean growers or dairy farmers are dumping lots of fertilizer and manure into watersheds. It’s that small amounts of nutrients — less than 1 percent of the fertilizer applied each year — wash off some 4 million acres of land. These trickles combine to make a river of phosphorus that feeds the harmful algal blooms in Lake Erie every year.

“Right now, we get a few people doing this, that, and the other (to reduce runoff),” Johnson says. “How do you get every farmer to incorporate something differently than what they have been doing?”

For Chris Kurt, one way to get farmers to change their methods is to show them how it’s done.

On a blustery autumn afternoon, Kurt walks through his endlessly flat farm near Dunkirk, a village of some 900 people in northwest Ohio. Withering corn stalks rustle in the wind as the neighbor’s giant green tractor groans from across the two-lane road. A yellow propeller plane roars overhead, swooping up and down to spray fertilizer over an adjacent field.

Kurt’s family has owned farmland here since 1883, when his ancestors sailed over from Switzerland and made their way to Ohio. In recent years, Kurt has adopted several strategies to curb the use of phosphorus-rich fertilizer on his corn and soybean crops. 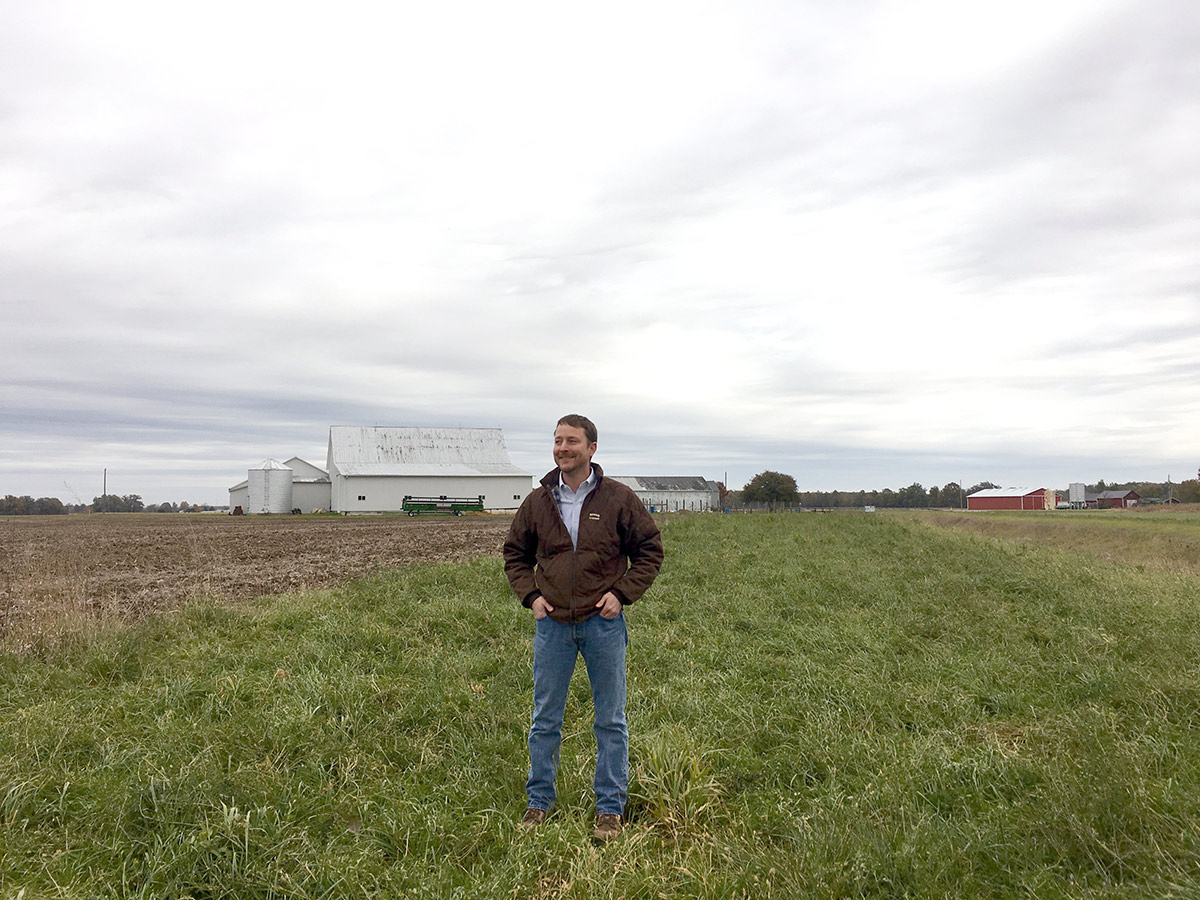 Kurt on his farm. His family has owned the fields since 1883. Photo by Maria Gallucci

Kurt’s farm is one of three demonstration projects in the Blanchard River watershed that spills into Lake Erie. The five-year initiative is led by the Ohio Farm Bureau, an industry group, and the U.S. Department of Agriculture’s Natural Resources Conservation Services. It’s aim is to gather field data and help educate farmers, policymakers and citizen groups about effective conservation practices. The nonprofit Nature Conservancy helped fund a tiered drainage ditch through Kurt’s farm that helps slow runoff and absorb nutrients.

At first, he began testing nutrient levels in the soil, and used the information to write his nutrient management plan. Using “variable rate technology,” he tailors fertilizer applications for every 2.5-square acres of farmland. In some places, the soil is already so rich that he doesn’t apply anything, and Kurt now uses about 10,000 fewer pounds of fertilizer than he did with conventional methods. The amount he saves on fertilizer purchases helps to offset the cost of the otherwise expensive soil testing and technology.

His latest project is a kind of agricultural duel.

This fall, Kurt tilled the field north of the drainage ditch that runs through his farm as he typically does, with a big combine that churns up mud and works fertilizer into the soil. On the opposite field, the soil remains undisturbed. Instead of tilling, he planted a cover crop of oats and crimson clover and applied fertilizer directly to the soil. Two water monitors sit on each side of the ditch like referees, gathering samples of surface water and subsurface water to compare which field — tilled or “no-till” — retains more of its nutrients.

“If you’re gonna choose a practice as a fix (for runoff), it better be right,” Kurt says, noting that measures can take several years and thousands of dollars to implement. “That’s why I think this testing is so important.”

Still, despite his efforts to curb fertilizer runoff, he says a major element remains out of his control: the heavy rainstorms that pound his fields. On farms throughout the region, most of the runoff escapes during big storms that can wash away months of progress within hours. 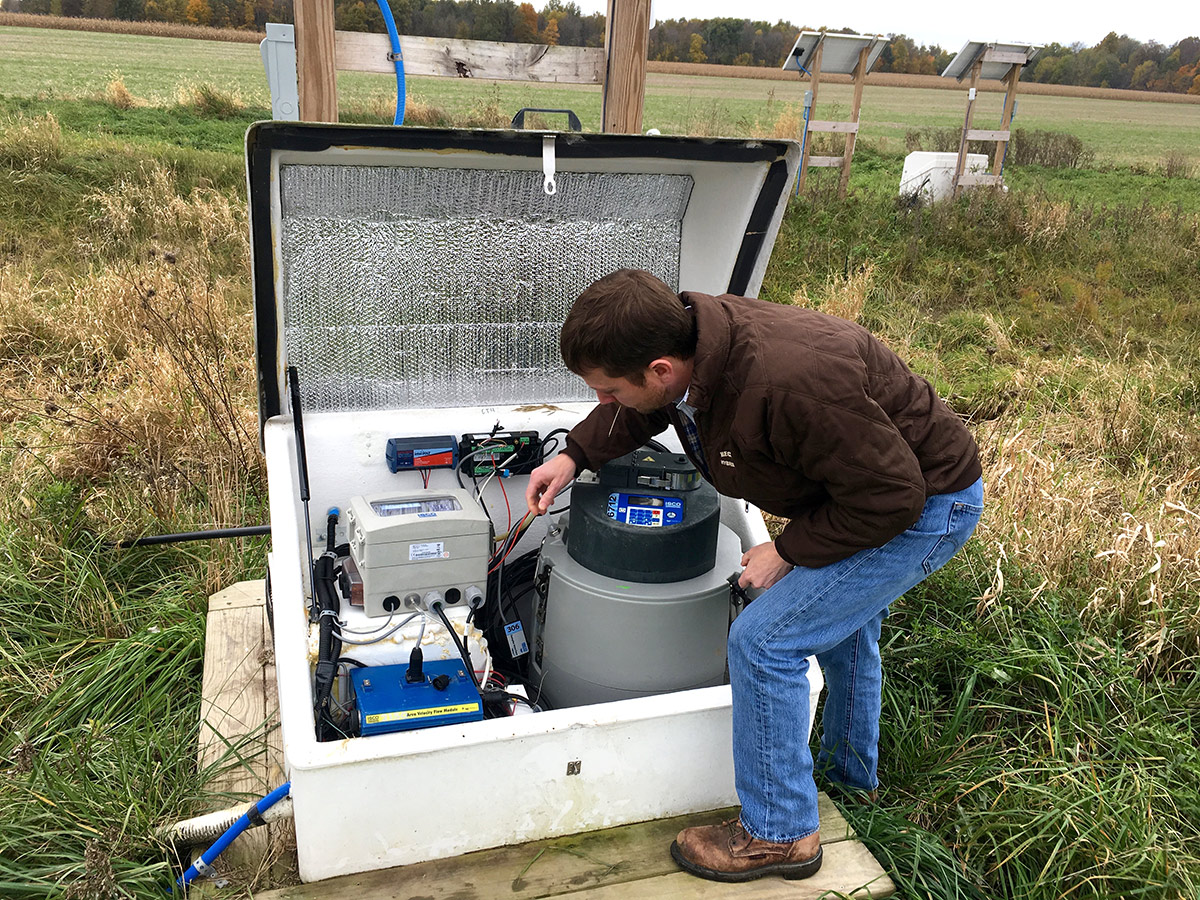 Climate change plays a role, too. Warming water temperatures and more frequent and intense rainfall have already contributed to longer algal bloom seasons in the last two decades. And that’s only likely to get worse, says Thomas Bridgeman, who directs the Lake Erie Center at the University of Toledo.

Climate change is “working against all our efforts,” he told a group of journalists during a recent cruise on the Maumee River near Toledo. The ample waterway connects to watersheds across northwest Ohio, serving as the primary pipeline for phosphorus pollution in Lake Erie.

Bridgeman passed around a plastic bottle filled with chunky, seafoam-green liquid: a piece of algal bloom from mid-August. “Do not open that bottle!” he warned.

A Plan To ‘Light The Fire’

There’s little doubt that northwest Ohio’s watersheds are afflicted with phosphorus pollution, which threatens drinking water supplies and ecosystems.The western waters of Lake Erie are already considered “impaired” under the Clean Water Act, after the Ohio Environmental Protection Agency made the designation in March.

The debate around Gov. Kasich’s executive order is about whether Kasich has the best solution to the state’s gnawing toxic algae problem. Farm industry groups have criticized the emphasis on nutrient management plans, those detailed strategies that Kasich’s order would compel thousands of farmers to adopt.

Although many large industrial farms already have them, the plans can be cumbersome and costly for smaller farms, particularly those with thin profit margins, Kurt says. And research isn’t clear whether such plans lead to significant reductions in farm runoff (it doesn’t help that agricultural officials rarely enforce them).

“Most plans unfortunately end up just getting put on the shelf,” says Aaron Heilers, a project manager of the Blanchard River Demonstration Farms, during a visit to Kurt’s farm. “They sound great, but are they actually going to solve the problem that everybody wants them to solve, the water quality issue?”

Instead, farm groups say they support existing state policies, including ones to train and certify farmers on more efficient fertilizer application, as well as loan and grant programs to help farmers reduce runoff.

Yet none of these measures specifically target the heavily farmed parts of northwest Ohio, as the Kasich administration’s executive order would do. Nor have existing efforts done enough to address the “urgency” of toxic algae’s threat to human health, says Jeff Reutter, a former director of the Ohio Sea Grant program and an expert on algal blooms.

“The group that’s truly affected here are the people who are living along the shoreline, both the businesses and the people that drink that water,” he says.