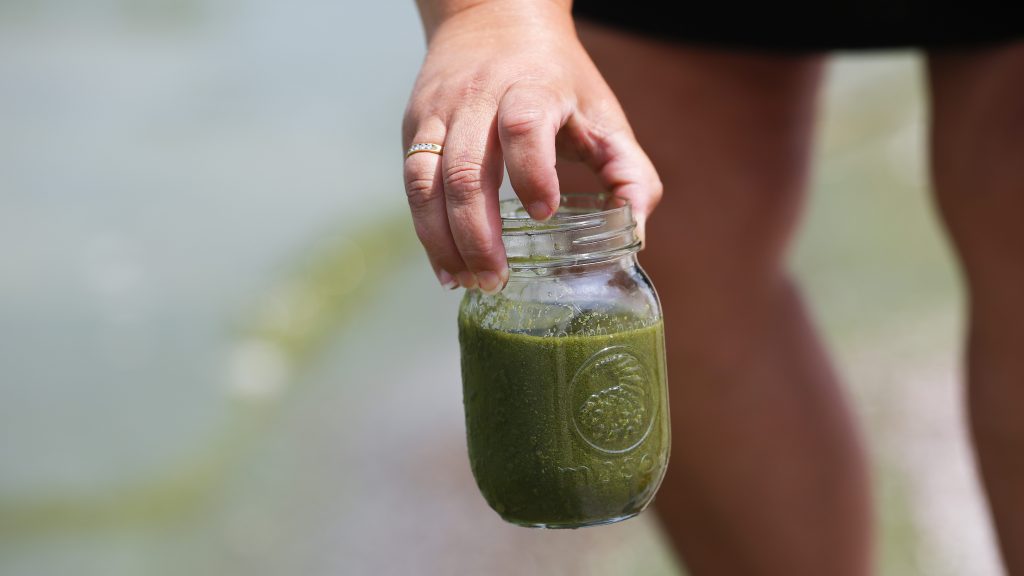 Algae is here, and it might be toxic. That’s the gist of the warnings cropping up along Lake Erie’s beaches this summer.

Algae blooms have grown noticeably larger in Lake Erie. Last year, a bright-green bloom stretched across more than 700 square miles of the lake. The plant’s growth is fueled by a combination of sunlight and excess nutrients like phosphorus and nitrogen washing into the water.

The algae sometimes produces toxins that can sicken humans and animals if ingested, touched, or inhaled.

The plant thrives in water temperatures above 68 degrees Fahrenheit — a threshold the lake reached nine days earlier than normal this year, says Timothy Davis, a professor of biological science at Bowling Green State University. “The reason why we’re seeing an early bloom this year is because we’ve had a significantly warmer past few weeks than we’ve seen in the past few years,” he says.

But it’s not just Lake Erie — freshwater harmful algae blooms have sprung up all over the country, in Utah, Florida, and Kansas, where they contaminated the city of Norton’s water supply two weeks ago. There’s a consensus among researchers that climate change is making it worse.

Just to be clear: Nutrient pollution from agriculture is a major cause of algae growth. Coupled with the sun’s rays, it’s basically bloom fuel.

“What is sort of new about the issue is that we now see a synergistic effect with climate change along with the nutrient over enrichment problem,” says University of North Carolina Chapel Hill professor of marine and environmental sciences Hans Paerl. “That’s led to an even more potent combination.”

The bacteria thrives at warm temperatures. Generally, the warmer it gets, the more it can grow. So climate change essentially widens the season for blooms to develop, Davis explains.

Even in the northernmost and southernmost latitudes of the planet, where lakes used to be permanently frozen over, algae has started to emerge. “No doubt that geographic expansion is taking place,” Paerl says. “That can be linked to climate change.”