How does one determine the carbon footprint of a specific product, service, or individual?

–Curious About My Carbon

The carbon footprint is the building block of climate understanding: If you begin to quantify your own contribution to the massive cloud of emissions trapping heat in the atmosphere, you can wrap your head around the importance of shrinking your little piece of it.

But that doesn’t mean it’s exactly intuitive. What the hell does “carbon footprint” even mean? You don’t step on anything. I mean, you sort of step on the future, but that’s hard to visualize.

The idea of an ecological footprint — which measures the land required to support someone’s lifestyle — more or less goes back to the ’70s. It was a way to conceptualize how your personal lifestyle took up a portion of a finite resource — that is, land on Earth. The carbon footprint is a similar concept, although some climate scientists agree that “footprint” is a confusing metaphor. Given that it’s measured in tons of greenhouse gases, carbon “weight” might be a more accurate term. But regardless, it’s meant to convey the same idea: You are creating x amount of this big burdensome thing that we’re all trying to limit, at a cost to the future of human civilization.

The anti-industrialization screed “Blueprint of Survival,” which described the unsustainability of nonstop economic growth, was published in The Ecologist way back in 1972, but it could easily be describing our situation today: “We behave as if we knew nothing of the environment and had no conception of its predictability, treating it instead with scant and brutal regard as if it were an idiosyncratic and extremely stupid slave.”

Wait, you may be thinking, I’m not like that. But even if you’re not the kind of person who would just dump all your trash on the ground in a park for fun, your actions and energy use are taking a toll on the planet via invisible pollutants, says Charles Barnhart, assistant professor at the Institute for Energy Studies at Western Washington University. “Just as a park is a shared resource, the entire atmosphere is a shared resource.”

Now, CAMC, you asked how one determines a carbon footprint. I almost don’t want to tell you, because it’s exhausting and pretty discouraging, but you are here to Learn the Truth. So here it is.

Basically, a carbon footprint measures the amount of carbon dioxide released throughout an object’s manufacturing process and existence. So, say we’re measuring the carbon impact of a pencil — you might measure CO2 emitted by the timber operation that felled and processed the wood for the pencil, the machinery that mined graphite, the trucks that brought those raw materials to the pencil factory, the pencil factory itself, the generators powering the pencil factory, and finally, by the truck that shipped the pencil to the Staples or wherever.

Understanding the energy that feeds the multiple supply chains that touch a product’s life cycle is difficult, but Barnhart says calculating a product’s environmental impact could be a lot more complicated. You have to truncate the history at some point, or, theoretically, you could go all the way back to the invention of the wheel.

“Do you count what the factory worker ate on break? That becomes absurd,” he said. “We count all the big components [which make up an estimated 90 percent of the carbon mass of a product] and ignore the rest.”

Calculating the carbon impact of a person’s lifestyle takes a similar approach — you look at the big CO2 contributors, which are home, transportation, diet, and purchasing habits. The only peer-reviewed personal carbon footprint calculator is made by the CoolClimate Network, a project at UC Berkeley, and I have to say I’m a big fan: It’s easy to use, kind of fun, comprehensive, and gives you a sense of how your household’s footprint compares to others’.

I played around with it to see what makes up my household’s biggest contribution. 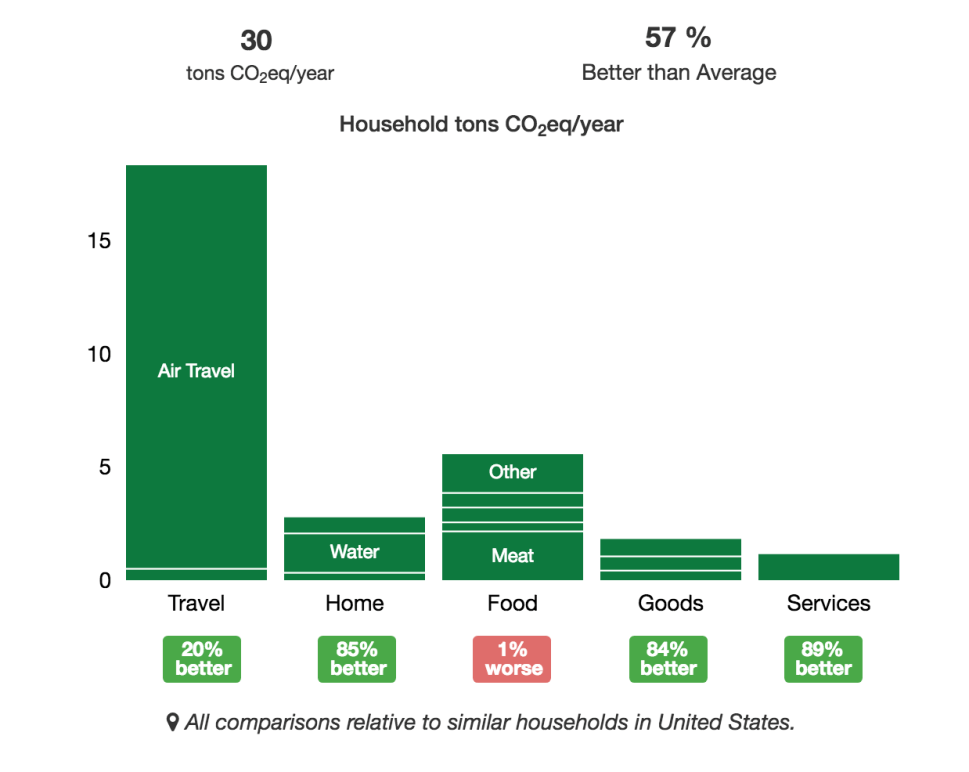 So what are we looking at here? I live with my boyfriend, which makes us a two-person household. We live in a pretty small and well-insulated apartment near downtown Seattle that’s heated and powered almost entirely by renewably sourced electricity, we don’t have a car, we rarely eat meat at home, and we try to buy second-hand whenever possible. That puts us well below 10 tons of carbon equivalent per year (at average or better-than-average levels) for the home, food, goods, and services categories. By far, our biggest carbon contributor is travel. We both fly every couple of months to visit friends and family and travel for fun, and as you can see, that really adds up.

Looking at our carbon footprint I was surprised by a few things. First, that even with that frequent flying, our transportation impact was 20 percent smaller than comparable households. And even though we put a lot of thought into what I thought was climate-conscious eating, our diet impact was still a little bigger than average. (Not to point fingers, but I will say that every day my boyfriend eats like he is a bear emerging from hibernation.)

Chris Jones, the Director of the CoolClimate Network, developed the beta version of this carbon footprint calculator in 2005 and has been refining it ever since. I asked him how that all adds up. Basically, his answer was: rich people.

With Jones’ model, a household’s carbon footprint gets compared to those of other households in the same zip code with similar income brackets. In my case, that means my boyfriend and I were being weighed against households that probably include car ownership in addition to frequent travel. In wealthier households in the U.S., diet makes up a relatively small percentage of total carbon footprint — so even climate-conscious changes in diet, like eliminating meat, won’t make much of a change relative to the footprint as a whole.

Air travel is considered a luxury because there aren’t that many people who fly frequently — in fact, about half of people in the United States don’t fly at all! In my opinion, flying has the dubious honor of being prodigiously expensive and extremely unpleasant, and I would prefer not to do it if I had a different way of getting across the country, but that’s a whole thing.

So what really predicts the size of your carbon footprint? “Of the 32 variables that go into our model, six of them predict 92 percent of the variation,” Jones said. “Income is the second-biggest predictor, but the first is vehicle ownership. After those, then it’s household size, carbon impact of electricity, size of your home.”

How easy it is to change those factors often comes down to where you happen to live. As you can see in this map, geographic location is a huge determinant of carbon footprint in the U.S.: 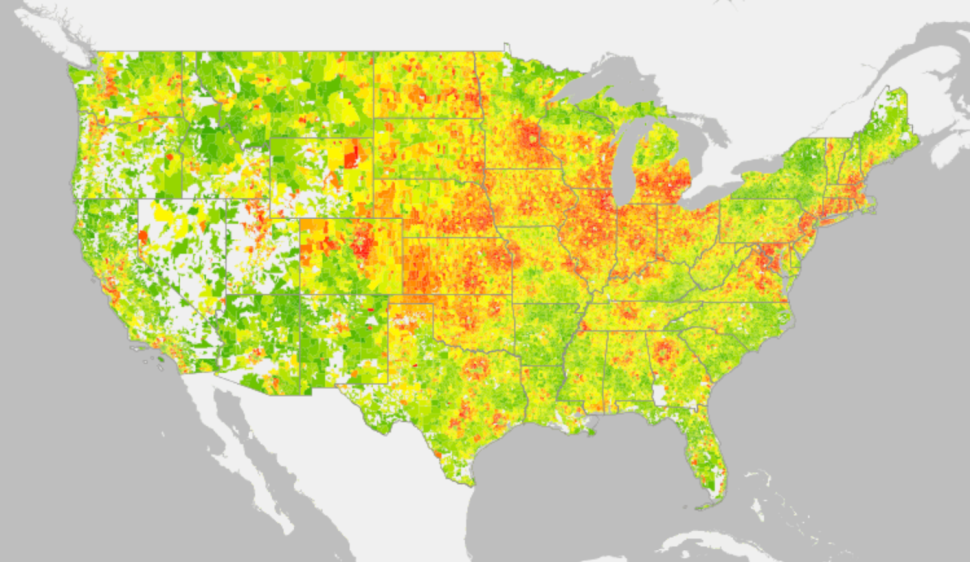 Your carbon footprint ends up being shaped by your environment in a lot of ways. For example, if you live in a place where big houses and driving are the norm, like much of the Midwest or really any suburbia, your “average” carbon footprint is going to start out bigger.

But Jones cautions that the solution to shrinking your carbon footprint isn’t as simple as a mass relocation campaign. “We want to put people where their footprints will be lower,” says Jones, “but we have to think of displacement of people who are there. These are difficult solutions with many other aspects beyond carbon. Social, environmental, economic, and equity considerations all have to be part of it.”

So to sum up, calculating your carbon footprint is not the end-all-be-all of measuring your environmental impact. It’s a super valuable tool to help understand the activities that contribute most to global warming and the impact that every action or decision can have on the warming planet. It’s a reminder of how emissions are strongly influenced by the infrastructure around you. But surprise! That infrastructure is also within your power to change!

“You have both positive and negative consequences of every action you take — not just consumption, but advocating for good things that make the world a better place,” Jones says.

In other words, don’t just focus on the negative. Remember that your impact on human civilization can include things like: Voting for policies and politicians who prioritize climate action! Getting your friends to vote out climate deniers! Showing up and yelling at city council for greener infrastructure! Running for office (why the hell not)!

So, dear CAMC: That’s a carbon footprint. And as long as calculating your own is motivating and not paralyzing, it’s a really informative way to understand your personal contribution to climate change.