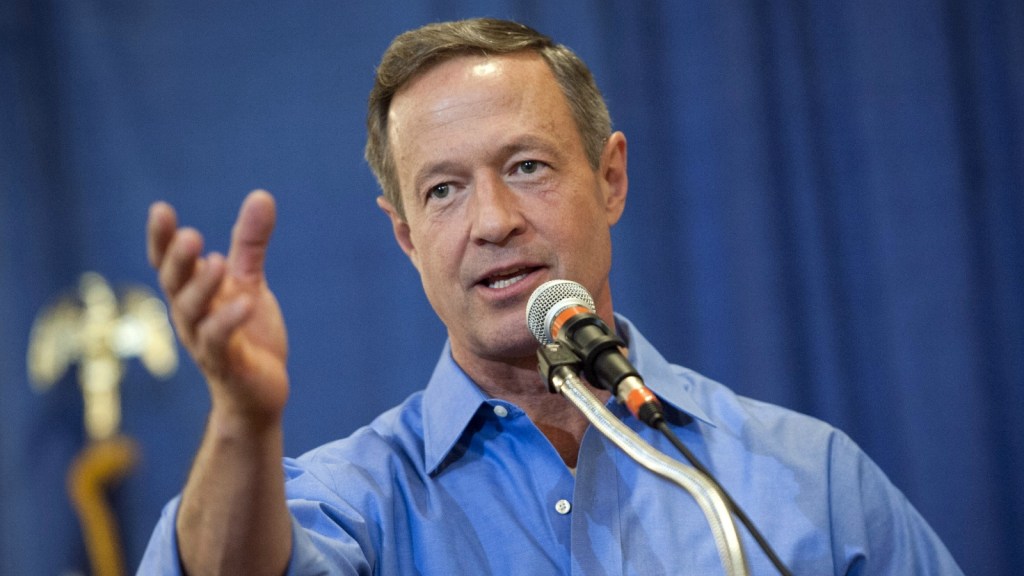 There’s one last big chance for Martin O’Malley to make his case before the Iowa caucuses next week, at Monday night’s Iowa town-hall forum for the three Democratic candidates. But a forum isn’t really what O’Malley needs to cut into the distant polling gap that separates him from Hillary Clinton and Bernie Sanders. What would benefit O’Malley the most is what we’ve never gotten in the Democratic presidential primary: a vigorous debate on climate change.

O’Malley bet early on clean energy, as part of his strategy to propose detailed policy on a host of domestic challenges. Last June, he was the first candidate to release a comprehensive vision for climate change. Environmental groups have given strong reviews to his proposals, which include a clean-energy job corps, a zero-tolerance policy for methane pollution, and an expansion of carbon regulations to unregulated sectors. But those high marks haven’t done much for his floundering campaign, as most of the key environmental endorsements, including that of the League of Conservation Voters, have gone to Clinton.

It hasn’t helped that the networks have squandered their chances for a substantive energy debate. In the Jan. 17 debate, before NBC cut away from a very brief question-and-answer on climate change, O’Malley issued a challenge to Clinton and Sanders: Match his long-term goal for a 100 percent clean electric grid by 2050.

You might have missed the moment altogether; it never came back up after the commercial break. But in an interview with the New Republic on Thursday, O’Malley made up for that missed opportunity, expanding on why he thinks his Democratic opponents — particularly Clinton — fall short.

O’Malley had harsh — even hyperbolic — criticism of Clinton, whose main climate proposal is to offer extra incentives to states and individuals to ramp up solar energy by 700 percent in 10 years. Her goal would be to reach 33 percent of clean energy in the electric grid by 2027, up from 16 percent today. “Secretary Clinton’s plan can most kindly be summed up as a voluntary solar panel plan for residences,” O’Malley told me. “Under her plan the planet would literally burn up. Her approach is much more incremental.”

Indeed, Clinton’s plan has been criticized by some environmentalists for not being strong enough to keep us under 2 degrees C of planetary warming above preindustrial averages. Scientists warn that many in the world can’t adapt to that level of warming. But to stay under it would require a complete transformation of the energy system in the near future. O’Malley is right in saying that candidates can’t approach this issue half-heartedly and claim they are strong on climate change.

O’Malley couched his criticisms of Sanders more gently, though he was emphatic that the senator’s clean-energy platform “does not go as far as mine does as fast as mine does.” But while the ex-governor came out much earlier with a full-blown plan, Sanders — who’s long been a strong environmental ally on Capitol Hill — has caught up in the last few months. Like both Clinton and O’Malley, Sanders calls for new jobs and investment in solar and wind. More recently, Sanders went further than O’Malley on one key issue for climate activists, proposing a ban on all fossil fuel development on public lands. O’Malley would ban offshore drilling and increase fees for mining on public lands, but has not said he’d ban it altogether like Sanders has.

O’Malley insists his record of “executive leadership” in Maryland makes him a better bet than Sanders on climate. And he notes that, throughout the campaign, he’s framed climate change not just as a moral issue, but as a business and infrastructure opportunity. “This is an engineering challenge and it’s going to require executive leadership and to declare this a top economic and national security goal for the United States of America,” he said. “This has been a centerpiece of my campaign since day one.” O’Malley also says he is “the only candidate in this race to put out a plan for cities,” referring to his proposals to invest in more efficient urban buildings with retrofitting and tougher standards for newer construction.

But the key distinction O’Malley makes with both of his opponents is that he’s the only one with an “all the above strategy,” including nuclear, that can get the U.S. to a 100-percent clean electric grid by 2050. We get there in part, he says, by making it easier for states to get out “ahead of the federal government.” The example he offered is encouraging states to consider Obama’s coal-fired power plant reforms as a floor, not a ceiling, and to go beyond it by extending tax credits for wind energy production beyond the five years Congress recently approved, to 10 or 20 years.

There is plenty of room for debate over which Democrat has the strongest approach to climate change — and over what’s lacking in Clinton’s plans. O’Malley isn’t the only Democrat who’s been itching to engage in that debate on a national stage. As Sanders’s campaign spokesperson Michael Briggs pointed out last week, Clinton has steered clear of some of the most controversial issues in energy policy today: methane from natural gas, drilling on federal lands, and whether to approve future pipeline projects. “What’s taking so long? Is there a pattern here?” he asked, noting Clinton’s four-year silence on how she viewed the Keystone XL pipeline, broken only in September when she finally came out against it. “These are among the important questions for voters in Iowa and New Hampshire. Does Secretary Clinton oppose the Bakken crude oil pipeline that cuts through Iowa and three other states? What’s her position on the Northeast Direct pipeline in New Hampshire?”

Clinton’s campaign chair, John Podesta responded on Medium, “I suggest that [the Sanders campaign] explain how they plan to back out of the international climate deal that President Obama reached with the rest of the world in Paris.” (Podesta, who I interviewed about Clinton’s climate policies in November, was exaggerating; Sanders never suggested he’d pull out of the accord, just that he was unimpressed with it).

Another climate issue worth consideration is an immediate one: the crisis caused by high levels of lead in the drinking water of Flint, Mich. The problem could foreseeably recur anywhere in the country, but the candidates have yet to explain how their administration would handle it better than Obama’s EPA (or Gov. Rick Snyder’s administration, for that matter). Fortunately, the Democrats are already talking about Flint without much prompting. Sanders called for Snyder, a Republican, to resign, while Clinton slammed the governor in the NBC debate but didn’t call for his resignation. O’Malley also told me he wants to see resignations over Flint, calling the situation an example of “utter incompetence and arrogance,” and “a huge failure by the state on a couple of levels.” Asked who should bear the brunt of the failure, O’Malley told me, “ultimately the responsibility is the governor’s.” But he stopped short of directly calling for Snyder to step down, saying only, “I think someone should resign.” (There have been a few lower-level resignations in the Snyder administration already.)

O’Malley is frustrated that he’s had few opportunities to talk climate in the official debates. “Just one question on climate change would have allowed us to have an exchange” about a clean electric grid, he told me. It’s possible, a week out from Iowa, that he’ll get a small window at Monday night’s forum to make up for that. But it will likely come too late to make a difference. If Iowa is the end of the line for O’Malley, he’ll deserve credit for having pushed Clinton (and, arguably, Sanders) to lay out stronger and more detailed proposals for solving the planet’s biggest challenge. But it’ll be a shame that he never got the chance to push Clinton, especially, harder and further.