Imagine a post-apocalyptic world in which resources are so scarce that the government decides that all grain must go to people rather than animals. Without animal feed, steak exists only as a memory, and eggs become black-market contraband. What would happen then?

This isn’t a thought experiment ripped from the darkest nightmares of small-government conservatives: It’s history. During World War I, when Allied forces cut off supply routes to German-occupied Denmark, the government essentially outlawed meat. Danes slaughtered their pigs so that people could eat the grain that otherwise fed the animals. The strategy worked: Instead of starving, Denmark’s people got healthier and, thanks to the the year-long blockade, the death rate from disease fell by 34 percent.

It might take this sort of extreme scenario to suppress our meat-hunger. People have a hard time giving it up. In her new book, Meathooked: The History and Science of Our 2.5-Million-Year Obsession with Meat, Marta Zaraska — a “vegetarian” who covertly nibbles bacon — seeks to understand exactly why we are so hooked on eating cows, pigs, and chickens. The example of Denmark in World War I suggests that it’s not the preservation of our health that compels us to snarf up steaks and bacon. If people needed meat to be healthy, the death rate during the Danish blockade would have soared. 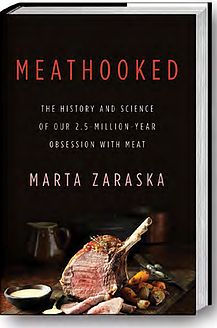 So, if our bodies don’t need meat, why are we so addicted to it? Why do we support an entire imitation-meat industry, but not imitation peanuts for people with allergies, or “fake carrots for the strict Jains, who avoid root vegetables,” Zaraska wonders. Why is meat so important to us?

Perhaps we’re all carnivores by nature. Paleo types like to point out that we have canine teeth after all. But canines aren’t the mark of a carnivore — deer and horses have them, too. The size of these teeth doesn’t have much to do with diet, Zaraska writes, but “everything to do with sex and fighting.” In the end, Zaraska is unable to unearth evidence that eating meat is innate.

Maybe there’s something biological behind our cravings. A study of twins suggested that a liking for meat is highly heritable, so there could be a genetic element. It’s also true that cultures around the world have recognized a kind of hunger that cannot be satisfied by starches or veggies. This “meat hunger” is actually a hunger for protein, Zaraska concludes, and you can get that from peanut butter, lentils, or black beans.

The most powerful ways in which meat has us hooked are not biological, but social. The tradition of sharing meat goes back an estimated 2.5 million years, to the time before Homo sapiens, when researchers think our distant ancestors started bringing home flesh and dividing it among members of the group. Hunting animals with the tools available at that time was inefficient; it would have been much easier to get the calories by foraging. So paleoanthropologists think that the point of hunting wasn’t simply to scare up food, but to form alliances, win favors, and strengthen bonds among members of the clan. If man is a social animal, meat was the original social currency. We’ve found new currencies — likes and bitcoins — but we still have meat. It has stewed with our traditions so thoroughly over the millennia that it’s no wonder we have trouble eating a smidgen less.

Zaraska thinks we might soon have what it takes to release ourselves from our craving for flesh. Technology could create substitutes that are every bit as delicious as fried chicken, and our growing understanding of psychology may allow us to rewire our traditions and feelings about eating animals. It’s a nice idea, and I hope she’s right, but I don’t expect this release from carnivory to sweep the globe anytime soon. Zaraska might have realized that her prediction sounded utopian, because she ends on a much more pragmatic note. Instead of pushing for vegan perfection, we should simply reduce the amount of meat we eat.

There’s widespread consensus on that point. If most of us ate less meat, it would be a boon for the environment — even if we just skipped one steak dinner every month. Until we find a way to quit meat as a species (if we ever do), we’ve got to make animal farming more humane and more efficient, so that every indulgence produces as little suffering, and as little environmental harm, as possible.

Organic milk is not the same as better milk